Manly should sack Des the deserter

Have Manly not learnt any lessons from the experience of the Dragons in 2011? Or even Collingwood for that matter? As soon as a coach decides they will be joining a rival club in the same competition they can no longer perform their duties.

It’s a simple conflict of interest that cannot be eschewed no matter how professional the individual in question.

The case in point being Wayne Bennett – a man of unquestionable integrity and arguably the best coach in the game.

The situation of a coach is fundamentally different to that of a player. A player has a simple job to do which is not necessarily affected by the fact that they are going to another club the following season.

If you tell them to hit it up hard – their competitive juices will likely take over.

The coach on the other hand is the leader and the custodian of the tactics. They hold all the knowledge, not only about on field tactics but also longer term issues such as player recruitment.

It’s like Allan Joyce saying “I am leaving to be CEO of Virgin in 2013 but will remain CEO of Qantas in the interim”, it’s absurd.

The empirical evidence from the Dragons in 2011 is compelling. The Dragons had a season of two halves; winning 10 out of their first 11 games and only 4 out of their next 14.

After some of the insipid performances in the second half of the season Bennett made the very un-Bennett like statement that it was the players and not he who had to work out what was going so wrong on the pitch.

This coming from a guy who would ordinarily die for his players. The ultimate proof that Bennett had mentally moved on was when he made a trip to Newcastle prior to the Dragons sudden death final against the Brisbane Broncos.

What would have happened if the Dragons had to play Knights in the finals? Would Bennett have still thought it right to rendezvous with Tinkler?

Earlier in the season when Bennett announced his intention to leave the Dragons (after only a few rounds of the 2011 season and prior to joining the Knights) he stated that he was leaving the Dragons because he had achieved what he had been hired to do – he had delivered the 2010 Premiership.

Such hubris was out of character for the normally modest man and revealed an alarming lack of ambition for the then current season.

Collingwood is a very different manifestation of the same issue. In that case the club had arranged in 2009 that Mick Malthouse would not coach past 2011.

As D Day approached this year the issue started to become a distraction for the team and history will record the fact that they did not win the 2011 Flag despite starting the season as the hottest favorites.

Coaching requires one hundred percent dedication. You cannot get this from someone whose days are numbered. Life tenure is now a relic of the past in all but some Academic institutions. You cannot expect coaches will not chase the dollars, just like we all do.

However, they should not be able to announce deals that take effect in six months or 12 months’ time because it dilutes their ability to do their job in the interim – which is to get their players to fulfill their destiny – it makes them a hypocrite of sorts.

One of the reasons why high profile coaches are so sort after is because of the players they attract – especially the ones that have played with them before.

If you leave a coach around a club for another 12 months – who is to say, they will not try to entice their favorite players to join them at their new club? It’s precisely why people are put on gardening leave in the corporate world.

In Manly’s case it’s not like they are concerned about the void that that will be left if they walk Desy immediately – they have already announced that current assistant Geoff Toovey will take over from him at the end of the season.

Again this is similar to the Malthouse/Buckley succession plan at Collingwood. It is almost inevitable that the incumbent and successor will fall out at some point because the demarcation of their authority has become blurred.

The Manly management (who have already hashed the contract renewal talks with Hasler – hence his move) need to cut their losses and ask Desy to clear his desk.

We are all left with the lament that loyalty appears to be a quality that was left in the last millennium.

Towards the end of the 42-12 thrashing, Samoa were trying anything with the pill. Manly's Josh Schuster even put on some touch footy moves… 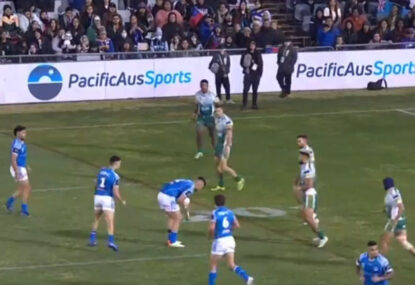 Samoa have shown their strength ahead of the Rugby League World Cup, defeating the Cook Islands 42-12 in an entertaining clash at Campbelltown. 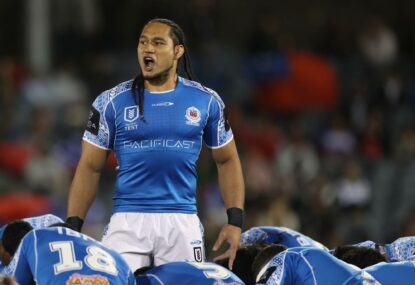 Samoa's Keenan Palasia was dizzied after his head made contact with the ground in a tackle that ultimate saw Makahesi Makatoa placed on report.… 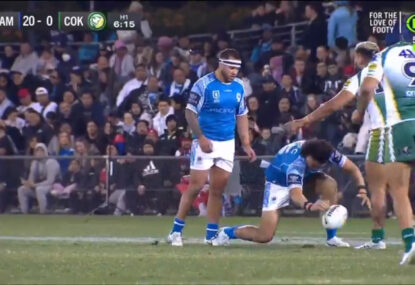 That was a spine-tingling Siva Tau from the Samoans, led by Martin Taupau. Penrith's Spencer Leniu was right up close to the Cook Islands… 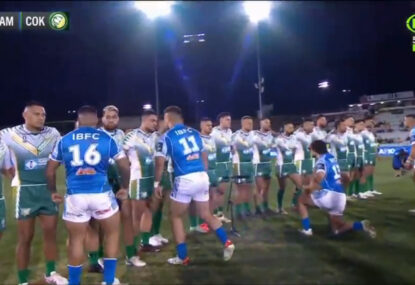 The pride was palpable from these players! The Cook Islands began with their anthem 'God is Truth' before Samoa's national anthem 'The Banner of… 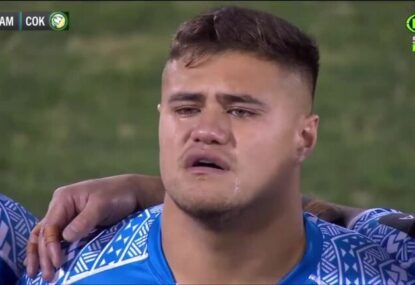