All Blacks ‘buoyed’ by support heading into semi

The Roar
14th October, 2011
10
Join the conversation
1169 Reads
Advertisement
Write for The Roar

Kiwi filmmaker Julian Shaw believes the All Blacks are riding a wave of national support and will be buoyed rather than crushed by playing at home against the Wallabies in this weekend’s Rugby World Cup semi-final.

Shaw knows the inner psyche of the All Blacks better than most.

The director and actor has made two films about the New Zealand rugby team, the biographical about John Kirwan titled All Blacks Don’t Cry, and the and new documentary Cup of Dreams.

His latest effort looks at New Zealand’s preparation for the 2011 Rugby World, the intense connection New Zealanders have with the All Blacks and his own family experiences seen through the lens of a passionate All Black fan.

Shaw said the pressure on the All Blacks away from home is “actually less positive than the unconditional support they will receive in Auckland this weekend”.

“It is a truly exciting time and a very special moment – let’s enjoy it, not shy away from the pressure I say,” he said.

Shaw, who resides in Sydney, is predicting a tight battle on Sunday.

“In my heart of hearts I know New Zealand is destined for a huge performance – we have to be excited about the opportunity to right the wrongs of two World Cups where we have lost to our trans-Tasman rivals in the semifinals,” he said.

“I believe that the home ground advantage may once again prove too great an obstacle to overcome for Australia, but this will be a tight battle that will only be decided in the last ten minutes. Look for New Zealand’s forwards to throw life and limb into the breakdown area which could be the difference.”

For Cup of Dreams Shaw spent hours interviewing Graham Henry, Dan Carter, Richie McCaw and other All Blacks to explore the close connection Kiwis have with the team.

Shaw believes the All Blacks don’t have more pressure on them now than they did in previous World Cups.

“I think the pressure has hit a plateau, it can’t really get any higher than it was four years ago,” he said. “Everyone is saying ‘yes, but it’s in their own country this time’ but in fact the pressure to win was just as overwhelming in 2007.

“If anything there seems to be more realism this time around and more unconditional support for the men in black. We will be heartbroken but not shocked if the All Blacks are to lose – whereas we were all taken by surprise in 2007.”

Shaw feels that the loss of Carter and Mils Muliaina has helped galvanise the All Blacks.

“In a playing sense both losses are tragic and unfortunate, but these things have a way of galvanising teams,” he said.

“I actually think the loss of Carter has forced the players to pull together. So after the initial agony I believe it will have helped the All Blacks overall psyche. Aaron Cruden has a lion heart and he’ll need it on Sunday.”

Shaw, who will be in New Zealand for the match, will film a special epilogue for Cup of Dreams.

“There will be either tears of joy or pain,” he said.

“I have filmed kiwi fans at Eden park watching the All Blacks earlier in the tournament and I will absolutely be in New Zealand next week should the All Blacks get through.

“I’m working on an epilogue for my film Cup of Dreams – and of course an All Black win would be an incredible way to cap off the four year journey of making this film. But I understand it could all be over on Sunday night, so I’m savouring the moment for now.” 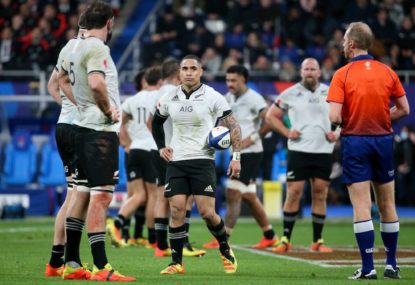