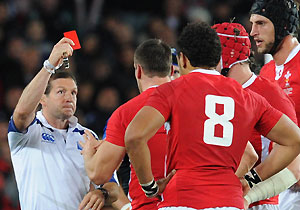 I’m sitting here in disbelief after Welsh captain Sam Warburton was red carded for a spear tackle after just 17 minutes. What was referee Alain Rolland thinking? France, having lost two pool games, have gained a huge advantage for what was, at worst, a yellow card offence – but Warburton was sent off.

Warburton’s tackle on France number 14 Vincent Clerc was unfortunate and certainly worthy of a penalty and reprimand.

It’s something you don’t wish to see inflicted on anyone. Clerc landed in a dangerous position on his back, and near his head.

But at such an early stage of the game, referee Alain Rolland has clearly over-reacted to the situation.

With Adam Jones already out hurt, Wales now face the difficult French team a man down, and were trailing by three points at half-time.

I can clearly remember the last time someone from Wales was sent off in a Rugby World Cup – Huw Richards punched All Black Gary Whetton.

That was a red card. This wasn’t.

Over to you – what did you think?