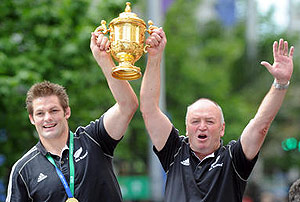 Yeah, take that All Blacks. You might have won your second World Cup, but it took you 24 years to do it. That’s right, I said it. You and your fourth string flyhalf. I know what’s going on. You think you can just snaffle this World Cup and we’ll all forget the fun we’ve had these last 24 years.

Not for a minute.

Watching the drama and agony of the world’s best side getting bested in knock-out rugby these last two and a half decades has been a guilty pleasure we’ve all indulged in, sometimes with a little too much relish.

Nup, that’s in the fine print.

We still get to pull that one out no matter how well your opposition plays or how bad the ref was. So don’t go getting too full of yourselves, like England did after 2003, or we’ll be there waiting, gagging, for you to choke, as it were.

For the next 24 years, we’re going to need some new quips to throw at you I guess but that shouldn’t be too hard.

You only win at home.
You only beat the French.
Wales would have destroyed you.

Yeah, I’m getting a bit carried away with that last one but that’s the fun. You guys were friggin awesome and apart from the final you were the never tested.

Against Australia, you put on an eighty minute haka while we stood back (were belted back) playing kicksies.

In the fina,l France rose to your level and then some but you held on, held them out and now hold the trophy. Thierry Dusautoir, the French captain, was absolutely immense as were Imanol Harinordoquy, Lionel Nallet and Aurelien Rougerie.

Yet, even with these champions playing the games of their lives, you kept on until they had nothing left.

And, at the death of this World Cup, there is nothing left but praise for a wonderful New Zealand team. It is too much to single out any one player as you’ve elevated the meaning of team play in this tournament however the opportunity to thank and farewell Brad Thorn for a fitting end to a grand career won’t come again.

What an absolute legend!

I might be getting carried away again, but I believe that in 24 years time (when New Zealand presumably will win their third World Cup) people will find it hard to believe that he achieved what he did in both union and league. Even now, with the evidence before our eyes it seems a little bizarre, mostly because he remains so humble.

Just to recap a few highlights;

What chance anyone will ever do this again and still retain, like the vast majority of his team mates, every appearance of being a humble and decent bloke?

What an absolute legend! What a way to end a 24 year wait!