The microphone that was attached to Miron Bleiberg’s lapel on Sunday represented more than just a television experiment. The Gold Coast United boss should be commended for obliging when he was asked by Fox Sports to let viewers into his headspace for their match at home to Wellington.

It was a brave move to begin with, but as the charismatic former Israeli Navy captain explained to viewers his tactical approach throughout the game and his reasoning behind substitutions, its value became clear.

Was it a success? Judging by Bleiberg’s reaction – he joked in his post-match press conference that he thought he wasn’t used enough on-air – the answer is a clear yes.

In Bleiberg, the A-League has a major asset – a coach who is not only good at what he does, but who speaks in soundbites and quotable lines and is ready to help.

But far more than just a made-for-TV gimmick, the move showed the way forward for the A-League to become to be a competitive force in the broadcast deals market.

And given the next broadcast rights deal will have a massive impact on how football in Australia will fare over the next five years, it’s not a moment too soon.

The new Twenty20 Big Bash League, for all its glow-in-the-dark hubris and its shameless plastic franchise model, has been rating its pants off on cable TV.

That’s not just because Australians love their cricket, but also because the competition itself has dared to be different, with players wired up and often speaking live to commentators in medias res.

Shane Warne might now be a peroxide caricature of the cult hero he once was, but the experience of listening him explain his approach to bowling certain deliveries before he rolls the arm over is unrivalled in sport.

It’s the ultimate manifestation of sports heroism. The 12-year-old me would have killed to listen to Warnie explaining the art of leg spin before bowling someone around their legs. It completely changes the way sport is viewed.

There is a risk that such link-ups can be seen as being somewhat disrespectful to the professionalism of the sport, but it lends itself well to the Big Bash League, because it knows what it is – a two-month whirlwind of bright lights and big cricket.

It’s hard to imagine David Beckham guiding an audience through one of his trademark free-kicks, or Lionel Messi choreographing one of his mesmerising runs before it happens – and given the conservatism of FIFA those dream sequences will never occur.

That means the FFA is already behind the eight-ball when it comes to providing value in the dog-eat-dog world of broadcast rights.

But with football in Australia, where Twenty20 is the elephant in the FFA boardroom, the sport has to not only compete with its direct opponents if it wants to build on its progress, it needs to innovate.

Fans of the round-ball game can’t expect the average Australian to fall in love with the A-League when the fluorescent glow of pyjama cricket is just one channel away.

The Big Bash League is going the extra mile, and that’s why it was good to listen to football playing catch-up with Bleiberg’s role in Sunday’s broadcast.

Australian football has to do things differently. We already do. Our nation’s sporting culture means relegation and promotion will never happen the way it does in Europe.

Our fascination with grand finals means we will never value finishing in top spot as much as they do in the English Premier League.

The FFA has also bowed to pressure in allowing replays of contentious decisions to be shown on the big screen at stadiums, which is something they’ve never done before.

Lyall Gorman revealed their motivation: “In making this change, we are bringing football into line with the other mainstream professional sports in Australia that make extensive use of stadium video screen replays.”

Forget any other assertions – that is the main thing for the A-League. Australia is a unique sporting market and the FFA has to play their hand by the lay of the land.

It would have been the easiest goal Leyton Orient’s Conor Wilkinson has ever scored. 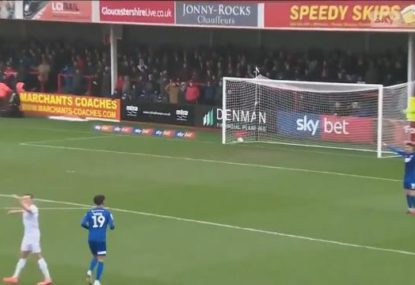 Bjorn Engels went from hero to villain after earlier scoring the equaliser. 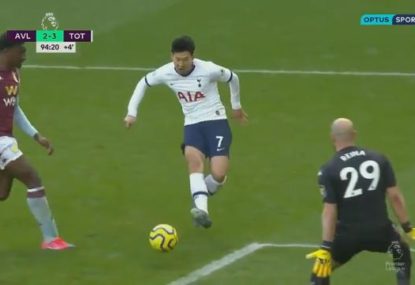 Crewe player comes up with potentially the miss of the decade

Chris Porter sprayed the easiest of tap-ins in a 2-1 defeat to Plymouth. 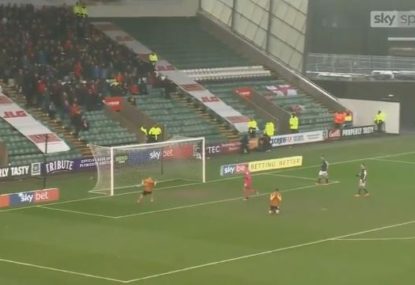 Crewe player comes up with potentially the miss of the decade