Predicting the AFL season from the bottom up

Looking back on last year’s pre-season predictions there were some things that were obvious and easy to predict and others that left us wondering why we even bothered playing oracle.

The AFL rightly received criticism for its predictability in the second half of 2011. But try telling that to a tipster who got eight right only once last season.

If you can’t get eight tips right with multiple rounds of footy already played how are you supposed to make predictions for an entire season?

Human nature is to declare the winners first. However, in a bid to improve on my predictions of 2011, let’s start this year at the bottom and get some cheap “wins” locked away.

Greater Western Sydney will most likely have a name change, to drop the Greater before they become great. They are the locked in for the wooden spoon.

Second-year blues will haunt the Gold Coast (17th) more than I think they – and perhaps other pundits – will expect. Besides, Port Adelaide have shown enough this pre-season to suggest that they will not be the basket cases they were last year.

Here is where it gets tricky. Immediately you want to look at the teams from last year who were propping up the competition table.

It’s here that the obvious question hits you. How much longer can the Lions, Dees, Tigers and Roos continue to not be in the finals?

And worse, without priority picks to tank for – sorry, be eligible for – surely there is more benefit for these clubs to strive to win at all costs?

Every year there are clubs that come from nowhere to make their way into a surprise finals spot. Think West Coast last year.

The problem here is that for one team to enter the finals, one or two teams from last year need to drop out.

Here is the first big call. Western Bulldogs (16th) will have a bad year and St Kilda (15th) won’t be much better. Both have new coaches and new game plans to get used to.

Brisbane (14th) seem to rely too much on Jonathan Brown, but with him having missed so much football they should be used to it by now. Now that he’s back on the park that should mean a couple more wins than last year and signs of improvement for 2013 to come.

Pre-season form can mean something if you are winning and mean you are “trying things” if you are losing.

I have jumped on board the winning and promise that Port Adelaide (13th) have shown this summer. Besides, they can’t be that bad again.

If the final eight becomes a final 10 then we can assume Richmond (12th) will have a mortgage on 11th, although they will not even be that good this year.

Sure, the Tigers are coming and will improve. But it’s very difficult fitting 14 teams into eight. Someone has to miss out.

Richmond are good at it, so what is the difference between ninth and 12th anyway?

In a complete contradiction to my assessment of Port’s preseason form I can’t say the same will be the case for the NAB Cup premiers Adelaide (11th). The Crows will need to make the eight this September if they wish to feature in my pre-season finals predictions next year. At this stage they miss out.

Two days ago, when drafting this, North Melbourne (10th) were in the eight. Then a friend alerted me to the fact that the Demons had a very solid list and probably just needed a coach that wasn’t trying to play kids for the future.

The problem here is that Melbourne (9th) still have a light midfield an,d more importantly, still have better teams ahead of them.

If you thought the Saints and Dogs were surprises, here is the next one. The team that replaced North in the eight are last year’s premiers.

Geelong (8th), despite being the supreme team of the past half-decade, surely have to fall at some time.

Brisbane fell in the fifth year after making the Grand final; its Geelong’s 6th since their first Premiership of the era.

Essendon (7th) were impressive last year under James Hird and despite most thinking it will be second-year blues in their renaissance, the Bombers will climb one more place on last year.

Keeping them out of a home final will be Sydney (6th), who seem to be getting better each year. Once again, though, they will fall short of the double chance.

West Coast (6th) were the surprise climber of last season, managing to sneak into the four. While there is every chance they will do it again we have to remember just how good their veterans were last year. Two years in a row seems a more difficult prospect.

If sides are to climb then that means sides have to drop. Last week Collingwood (4th) were missing the four but, like the prospect of Geelong missing the eight, it is hard to see the Pies, with so many top line players, missing the double chance. However, they will lose enough games to make the four no sure thing until late in the season.

The bolter of the season will be the subterfuge coach himself, Ross Lyon and his Fremantle (3rd) outfit. The Dockers were expected to make the grade in 2011 but were cruelled by a big toe of a giant. Plus there were all the other injuries that left Mark Harvey, who had a date for the ball, to watch as the more qualified jock took her home at midnight.

The arrogance is back at Visy Park, as Carlton (2nd) continues their improvement trajectory towards a double chance and home final in 2012.

Which leaves the obvious pick of Hawthorn (1st) for the minor Premiership.

Ah you say, he has just written the final positions after the home and away matches.

That’s right, a Collingwood versus Carlton preliminary final awaits us in September, with the Pies to play the Hawks in the Grand Final.

What was everyone saying about the Kirribilli agreement not working?

Carlton brothers Jack and Ben Silvagni have been disciplined by the AFL team’s leadership group for drinking while recovering from injuries.

Three coffees at breakfast couldn’t ease Carlton recruit Jack Martin’s nerves before he finally got the news that had been almost a year in the making. 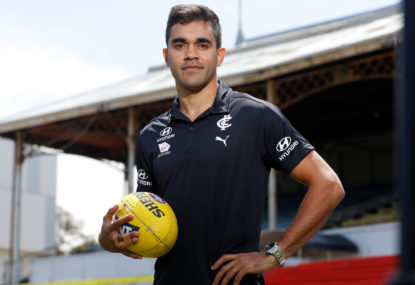 Carlton entered the 2010 decade having finally broken a seven-year finals drought and, despite a disappointing loss to the Brisbane Lions after holding a five-goal lead in the final quarter, there was a lot of optimism surrounding the Blues as they embarked on their fourth year under coach Brett Ratten. 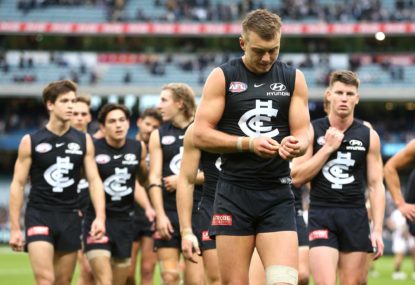