In light of Hunter Sports Group handing back their license for the Newcastle Jets, I’ve been wondering when did it all go wrong for the A-League and Australian football?

Those who work at Football Federation Australia will probably tell you it was mid-morning on Tuesday when they were informed by HSG of the Tinkler group’s decision.

Before this happened, FFA had a plan.

The peak body would fund a club in western Sydney to replace Gold Coast United as the A-League’s 10th team. This would help ensure the news coming out of the league was positive (“football is coming home”) and maximise the potential of the A-League’s next TV deal.

Once those goals were achieved FFA would hand the club off to either a community-based ownership model, or whoever was willing to take on the financial burden of an A-League club.

It was a desperate move but one that might have just worked, as long as nothing went wrong along the way. Well that dream lasted all of seven days.

Yet I’d suggest things actually started going wrong seven years ago when the A-League was launched with a list of fundamental errors.

A quick recap, and these included the failure to maximise the league’s impact by having more than one team in Melbourne and Sydney; using oversized stadiums due to incorrect expectations of how crowds would grow; and a lack of best-practice support for new clubs and expansion.

Since then we’ve seen varied success in two attempts to rectify the lack of a second club in Melbourne and in Sydney, and two failed expansion teams.

So where to now for the game?

The issue with HSG and the Newcastle Jets will drag on for a while longer, but it seems unlikely FFA will be able to force them into continued ownership of the 2007/08 A-League champions.

If Lowy can’t pull out another miracle like he did when he first brought Tinkler into the game’s fold, then sadly Newcastle will be on their way out of the A-League.

The lesson from the Gold Coast and Newcastle fiascos is the game can no longer continue to rely on volatile and unpredictable white knights with their own intentions.

Whatever the form, FFA must realign its approach to the structure and investment in the A-League.

If they can find a community investment model that works in western Sydney, then they might also uncover a way forward for the rest of the league. The game can no longer rely on a TV deal, which FFA now expects to cover only the salary cap, to be the game’s latest saviour. If not, then contraction rather than expansion will be the new buzzword.

Right now survival is the name of the game. 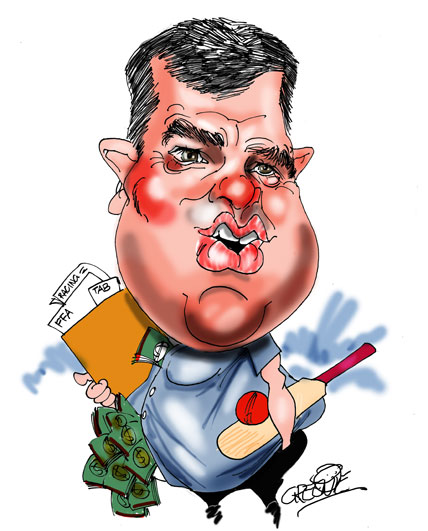 Portrait of Nathan Tinkler by sports caricaturist David Green. Caricatures are great for birthdays and gifts. Go to davidgreen.com.au