“It ain’t over until the fat lady sings, and she ain’t even in the building yet.” So said Brad Wiggins after his pulsating performance in Monday’s time trial to Besancon.

But if you read the British press, then the fat lady is well and truly banging on the door and waiting to enter the foyer.

While it’s safe to say Wiggins won’t be including Beth Ditto or Adele on his iPod playlist for at least another 10 days, it’s true that he is very much in command of this year’s Tour de France as we enter the race’s second phase and the all-important Alpine stages.

Truth be told, this Tour has hardly sprung any surprises regarding its two leading protagonists and their respective teams so far.

We knew that Wiggins was coming into the Tour in supreme form just like we knew Cadel Evans was somewhat short of his level in 2011.

We expected Wiggins to take time off Evans in the ITT – perhaps not as much as he did, but then again, he gained a similar chunk of time from Evans in the Dauphine time trial just one month prior to the race.

We knew that ‘understudy’ Chris Froome was a very good climber (at least, those of us who had watched last year’s Vuelta did) and we knew that there was not much separating Wiggins and Evans individually over the kind of terrain we saw on the weekend in the Vosges and Jura mountains.

We knew that Team Sky were a well-oiled machine who would excel in driving a hard pace into the climbs before setting up their main men in the finale – just like they did previously in the Dauphine so relentlessly.

So actually, the Tour has not thrown up too many curveballs. Yes, in a broader picture there have been the terrible crashes that have done for the hopes of many GC outsiders – but by the evidence of Monday’s time trial, these same guys would probably not have had much influence on the ultimate outcome of the Tour anyway.

Even Peter Sagan’s terrific treble, Andre Greipel’s dynamic double and Mark Cavendish’s solitary scalp were not – when taken as a whole – remotely unfeasible. Sagan won three stages in his debut Vuelta last year and was most people’s tip (including mine) for the green jersey; Greipel’s morale and form has skyrocketed this year on the back of a much-improved Lotto train; Cavendish entered the Tour an isolated figure after his new team put their balls in the yellow basket.

Sky and Wiggins may be on course for their yellow target in Paris – but there will be further twists and turns in this Tour yet.

“If it was already over, I would already be going home tonight,” said BMC’s team manager John Lelangue on Tuesday’s rest day. “Two minutes, two weeks – we have time.”

What’s more, people (British journalists in the main) are talking about Sky’s domination as if it can only logically continue into the next two weeks of racing. There’s no denying it has been utterly brilliant – but that is only within the framework of a three-stage stretch at the back end of the first 10 days. What’s on the horizon will be very different. That’s not to say it won’t continue – just that it’s not a given.

The climb up to La Planche des Belles Filles, won gloriously by Froome, came after some quite superb work by Sky’s Australian duo Mick Rogers and Richie Porte, two key components of the British-based team.

But while steep, that first Cat.1 summit finish was less than six kilometres long. Some of the Alpine and Pyrenean climbs that lie ahead are almost six times the length. And given the nature of the overall standings, Evans and the rest of the top ten know that they are going to have to attack in the coming days if they are going to stand any chance of overturning Sky.

It’s uncannily like a reverse scenario of last year’s Tour when Evans knew he could ride relatively conservatively and limit his losses for most of the race, knowing he could then overturn Andy Schleck in the final time trial.

This year, Evans (or the likes of Nibali and Menchov) will not only need to go into the penultimate day time trial in yellow – they will have to do so with a cushion of at least two minutes: the 53.5km ITT to Chartres is longer and flatter; Wiggins and Froome will be in their element.

Where can the time be made up? In short, everywhere. There are pretty much only two more flat stages in this year’s Tour: the ITT and the final ride into Paris. The next nine stages all have the potential to throw up ample opportunity.

Wednesday’s stage 10 features the HC (‘hors categorie’, or beyond the scale) climb of Col du Grand Colombier before a Cat.3 ascent and a 20km run off to Bellegarde-sur-Valserine – a chance for riders like Evans and Nibali to test the theory that Wiggins is not too comfortable while descending at speed.

Stage 11 – short at 148km but arguably the ‘queen stage’ because of its absence of any flat riding – features four gruelling climbs, including the HC ascents of the Col de la Madeleine and the Col du Glandon, and the Cat.1 summit finish at La Toussuire. Sky looked good going up the 6km-long Planche des Belles Filles – but will they be able to replicate that over climbs 35Km, 23km and 18km in length, once the attacks come in thick and fast?

Stage 14 from Limoux to Foix on the edge of the Pyrenees includes two Cat.1 climbs in the second half, and then an 18km descent followed by a 25km run to the finish. Once again, a rider like Nibali will be chomping at the bit.

After the second rest day, stage 16 visits the legendary Col d’Aubisque and Col du Tourmalet HC climbs before two equally steep Cat.1 climbs in the Col d’Aspin and Col de Peyresourde. Once again, a fast 15km descent to the finish will test the nerves of whoever is in yellow (it may no longer be Wiggins, after all).

Short stages in the mountains normally encourage attacking from the outset, and stage 17 – the Tour’s third and final summit finish – has all the ingredients of a classic. After an undulating opening two-thirds, the fearsome Port de Bales HC climb looms large, followed by a perilously steep descent and then the Col de Peyresourde once again, but this time from the reverse side. After another small descent, the stage then concludes with a sharp 10% ramp to the ski resort of Peyragudes.

Only the most blinkered of British fans will presume that Team Sky have this race firmly in the bag.

After seeing his deficit to Wiggins blown out to 1’43” after the time trial, Evans said he was “a little disappointed … but I’m still second which is a good place to be at this point.”

Granted, he’d definitely prefer it if the gap was less, but being second and not weighed down by the yellow jersey certainly has its benefits. Wiggins has already shown that he’s letting the constant media scrutiny get to him – as exemplified in his now notorious foul-mouthed rant when quizzed about doping in a post-stage press conference.

And yet the 32-year-old Briton is firmly in the driving seat and he will know that the race has to be taken to him – and not the other way around. All Wiggins has to do is follow the wheel of whomever is in second place in the GC – whether that’s Evans or someone else – and he will become the first Briton to win cycling’s biggest prize.

That won’t be easy. But in the other camp, Evans will be aware that if he is going to successfully defend his crown, he will have to overcome far more bigger obstacles than he did last year when pipping Schleck to the maillot jaune.

The question is whether or not Evans has it in him – both mentally and physically – to do that. Judging by his form, his team and his showing so far in the race, I suspect he doesn’t.

That does not necessarily mean I naturally expect Wiggins to be the winner. We still have a race on our hands.

Cyclist throws away race by celebrating too early

Tadej Pogacar snatched victory from Alexey Lutsenko on Stage 5 at the UAE Tour. 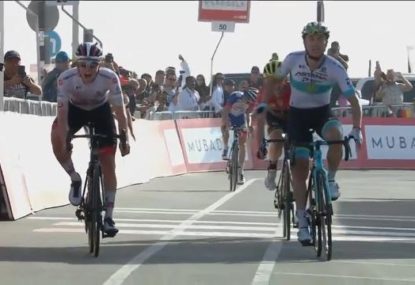 Cyclist throws away race by celebrating too early

Five months have passed since Rohan Dennis abandoned the Tour de France in mysterious circumstances, climbing off the bike seemingly without cause during stage 12, the day before the race’s major time trial.

Egan Bernal has became the first Colombian to win the Tour de France by retaining the overall leader’s yellow jersey after the 21st and final stage was won by Australia’s Caleb Ewan.

Australian rider Caleb Ewan has claimed his second victory in this year’s Tour de France by prevailing in a bunch sprint at the end of a crash-hit 16th stage.