The current emphasis on elite performance for Australia’s runners is unreasonable. It has resulted in smaller representations in other events at the upcoming 2012 London Olympic Games.

With more funding now going to sports and events where Australia has a greater chance of medal success, it is debatable whether tougher qualifying standards for our runners is likely to succeed.

Such a strategy is more likely to deter many young runners from pursuing their dreams. Furthermore, excluding Australian runners in this most prestigious of Olympic sports is totally out of character with the spirit of the Olympic Games. The Games, after all, intend to encourage the youth of the world’s many countries to meet and compete.

In realist terms, a carrot-and-stick approach is unlikely to prevail in running as it is simply one of the most difficult sports to win medals at a global level.

While rich nations do very well at sports which require considerable resources or have less global participation, such as cycling, rowing, and even swimming, it is only the US among wealthy OECD nations that regularly wins many running gold medals.

Even the mighty Russian and Chinese teams, near the top of Olympic Games in terms of medal counts, have struggled to make a major impact in running since 2000. In recent Olympic Games and World Championships, poor nations like Jamaica, Ethiopia and Kenya have fared best behind the US, far better than Australia and Great Britain. 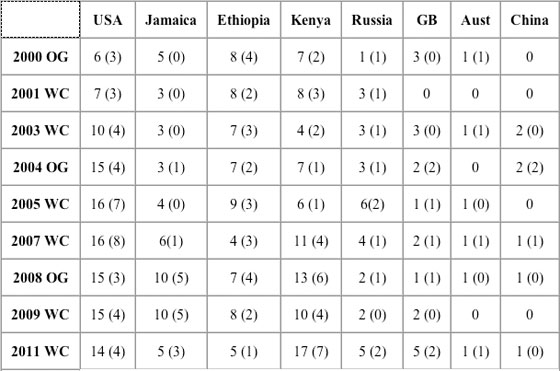 Australia, despite having an abundance of expensive all-weather tracks in its cities, struggles to win medals in running. Since Cathy Freeman won her last global championship at the 2000 Olympic Games, Australia has won just three global events, all in women hurdle events: Jana Pittman (2003 and 2007), and Sally Pearson (2011). Indeed, to make a semi-final in a global running race is indeed a major achievement.

This brings me to Australia’s current criteria for team selection and whether Australia should have more representation.

On February 29, 2012, Eric Hollingsworth, the National High Performance Director for Australian Athletics, told the ABC’s 7.30 Report that mediocrity will not be tolerated. He argued that the system is working with athletes “lifting to meet the standard – and those who can’t, simply don’t go”.

Hollingsworth argued that “at the end of the day, the Australian taxpayer, and the people who invest their tax dollars, want to see Australians win and do well at major championships”.

But do Australians really support such an elitist approach to Olympic Games selection or would Australians like to see greater representation? After all, the qualification rules for Olympic Games athletics stipulate that a National Olympic Committee can enter one athlete in an individual event if the athlete meets the B standard.

In Australia’s case, several runners were not selected despite them meeting the B standard in 2012. This included John Steffensen, who won the 400m at the Olympic Games trials during March, and Tamsyn Lewis who ran multiple B qualifiers in the 800m.

The 19-year old Steve Solimon, although not qualifying at Olympic Games trials in March, later met the B standard by winning the nationals in the 400m with a time of 45.58 seconds before winning a bronze medal in the World Junior Championships on July 12 by running 45.52.

On 14 July, Solimon was given provisional selection to run the individual 400m event at London, much to the disgust of Steffenson who argued the rules were again being shifted.

Clearly, Solimon is an excellent young athlete who is improving against top competition. He has also held his form better than the other 400m B standard qualifier (Steffensen). As of July 11, Solimon had the 64th best time for 2012, but rises to 39th when one allows for a maximum three competitors from each country in each individual event given US prowess alone.

Now if the issue that limits selection is the cost to the taxpayer, then why not allow Australia’s best athlete in each event to compete at the Olympic Games with the athlete raising his or her own money?

What harm could be caused by such a strategy when an athlete only gets one chance every four years to compete in an Olympic Games?

What message does such a tough qualifying criteria send to Australia’s athletes, already subject to one of the toughest drug testing regimes in the world? National success should indeed be deemed good enough to compete in this great global sports festival (the Olympic Games).

Do we penalise countries competing at the World Cup for football just because they are not ranked in the top 32? No, because representation is encouraged from all regions of the world.

We need to encourage our runners to compete at the top level. We should not merely promote a strategy which funds sports on the basis that Australia has a better chance to win a medal. The simple truth is not all sports are equal. Some sports are clearly more important in terms of both prestige and the public interest. Running is one of those sports, albeit as part of track and field.

In the future, perhaps Athletics Australia and the Australian government could conduct public surveys to investigate whether support exists for such an elite approach to running?

At the very least, Australia’s lesser athletes, having proven they are the best in our country and having met the B standard, should have had the chance to compete in the Olympic Games subject to their own funding arrangements in this most prestigious of global sports. 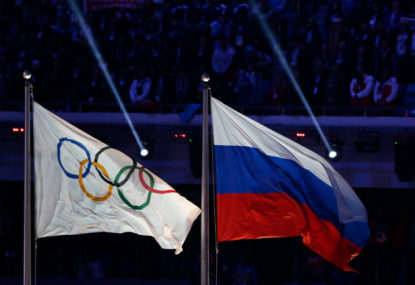