The Roar
29th July, 2012
4
Join the conversation
Advertisement
Write for The Roar

Wallabies captain David Pocock has signed with the Brumbies, inking a three year deal with the Jake White coached side in a big boost for the ACT club.

The move looked likely when yesterday it was announced yesterday by RugbyWA that Pocock would be leaving the Western Force.

The lure Pocock’s Brisbane-based family, as well as playing under White were the reasons the Wallabies captain outlined in his decision in an open letter to Force fans.

“Playing under former Springboks coach Jake White with all his knowledge and experience will allow me to have a fresh approach to the game and to continue to challenge myself,” Pocock said in his letter.

“Being based on the east coast will bring me closer to my family, who I’ve not seen as much of as I’d have liked, due to the combined factors of being located in Perth, and the heavy year-long rugby schedule.”

“AN open letter to supporters of rugby in Western Australia.

Some decisions in life are very difficult. And with those decisions, more often than not, the more you wrestle with the options the harder it is to make a decision.

This has certainly been the case in thinking about my playing future.

I’ve loved living in Perth and playing for the Western Force and although it’s time to begin an exciting new adventure with Em in Canberra, the decision has been unbelievably hard.

When I was just 17 the Force offered me an amazing opportunity to come and play under John Mitchell and John Mulvihill – to train with and learn from the likes of Nathan Sharpe, Brendan Cannon, Matt Hodgson and many others who I now consider great friends.

My main goal in writing to you was to explain some of the thinking behind my decision and to make clear my hopes for the club, but most importantly, to thank you, the supporters of the Emirates Western Force and rugby in WA.

Our fans – the Sea of Blue – are the envy of the Super Rugby competition. You remind us of the joy of playing – turning out rain, hail or shine, to support the boys in blue.

Even though we haven’t delivered the results we’d have liked, you’ve supported us through thick and thin and I hope you continue to support the club in this critical time in its development. It does make a difference, and will be instrumental in the future rise of the Force.

I have learnt so much in my time here. Being part of building a team in an AFL town was never going to be easy and we’ve certainly had our fair share of ups and downs over the last seven years.

There have been times we have fallen well short of our potential and while the commitment of everyone at the club can’t be faulted, for all of the attitude and best intentions – both on and away from the field, I wouldn’t be honest if I didn’t acknowledge that.

And of course that has factored into our decision to leave, but it’s only one in a number of factors that have convinced Em and I that it’s time for a fresh start.

Being based on the east coast will bring me closer to my family, who I’ve not seen as much of as I’d have liked, due to the combined factors of being located in Perth, and the heavy year-long rugby schedule.

Playing under former Springboks coach Jake White with all of his knowledge and experience will allow me to have a fresh approach to the game and continue to challenge myself.

Travel is also a factor. With Perth being the most isolated of the 15 Super Rugby capitals, the travel commitments are greater than for any other side in the competition.

Most teams have to sit on a plane for five hours a handful of times throughout a season. At the Force it is the norm, even more so for the Wallaby players, who then crisscross the country again routinely during that program.

It’s a big ask, and I’ve been doing it for seven years. That’s not to say that the travel barrier is something that the club can’t overcome.

The Western Force may not yet have achieved as much as we had hoped, but I would like to think that I have played my part in helping to further establish both the club, and the game of rugby union, in Perth and the wider West Australian state.

So finally to the Sea of Blue and the sponsors of the Emirates Western Force, thank you so much for your support over the last seven years – of both the club and me personally.

While I am excited about the change it is always a hard thing to move on, but I take with me so many good memories of my time with the Force family.

Thanks again for the support, 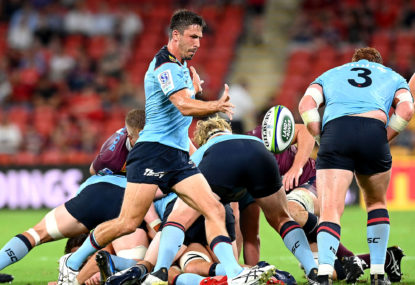