Preview of AFL Round 23 matches (all times AEST).

This match will have a huge bearing on the top four. Hawthorn will secure top spot with a win, but the fourth-placed Eagles will be desperate to notch the four points in order to secure a double finals chance. West Coast have displayed some hot form in recent wins over Geelong and Collingwood, but those games weren’t in Melbourne. West Coast beat Hawthorn on a slippery night in round four despite kicking just five goals for the match. The Eagles will probably need to triple that output if they are to make it two in a row against the premiership favourites. The Hawks named star utility Cyril Rioli after a fortnight out with a shoulder injury.

Key: Can the Eagles match Hawthorn’s potency in attack? West Coast had 14 goalkickers in last week’s win over Collingwood, and will need a similar spread against a side which averages 123 points a game.

Sydney broke Geelong’s 29-game winning streak at Simonds Stadium last year, and need a repeat performance if they are to guarantee themselves a top-two finish and two home finals. But sixth-placed Geelong also need to win if they are to secure a home elimination final. The stakes are high, and the Cats have the big-game experience to handle the pressure. But Geelong’s aura has diminished somewhat this season, and the ultra-consistent Swans will fancy their chances.

Key: How Geelong must wish they still had Swans ruckman Shane Mumford in their ranks. The Cats’ ruck division remains their glaring weakness and Mumford could be set for a field day. Geelong have recalled ruckman Nathan Vardy for the match.

A rare win for Gold Coast over Carlton last week ended up costing Blues coach Brett Ratten his job. The Crows learned a great deal from their own upset loss to Brisbane two weeks ago, and definitely won’t go in over complacent against the Suns, especially with a top-two spot on the line. The Suns are missing almost a dozen of their best players, and surely last week’s famous win was an aberration rather than a sign they have become giant killers. Adelaide’s silky midfield and huge spread of goalkickers should equate to an easy win.

Key: Gold Coast’s fledgling list has the taste for blood, but can they match it against a top-four side? Their win over Carlton means they won’t have the element of surprise up their sleeve, so they can expect a hard slog against a battle-hardened Adelaide outfit.

North Melbourne coach Brad Scott would have been fuming at his team’s last-quarter capitulation to Fremantle last week. Not only has it put their chances of earning a home final in severe jeopardy, but it also put a huge dent in their confidence heading into the finals. Make no mistake about it, North Melbourne will defeat GWS. But the margin could be just as important as the four points, with the Kangaroos needing to make up percentage on Fremantle, who are also in the hunt for sixth spot. However, if Geelong defeats Sydney, then the Kangaroos will have to settle for seventh or eighth.

Key: North’s tall trio of Drew Petrie, Lachie Hansen and Robbie Tarrant were unusually quiet last week. But with the Kangaroos in need of a massive score, expect them to be firing on all cylinders against GWS’s inexperienced defence.

The Bombers have lost their past six matches to Collingwood, and Essendon’s failure to win a game since round 16 suggests they’re in no shape to break that losing run. But Collingwood are a tad vulnerable following back-to-back losses, with the atrocious form of key forwards Travis Cloke and Chris Dawes adding to their woes. The `Pies have dropped Dawes a week out from the finals. Fifth-placed Collingwood have something to play for – a possible top-four berth – whereas the Bombers have nothing else but pride on their mind. The return of Magpies goalsneak Andrew Krakouer from a knee reconstruction is a feel-good story.

Key: Collingwood’s ruck and midfield were obliterated by West Coast last week. Will the return of No.1 ruckman Darren Jolly be enough to turn it around?

This is another of those games where the final margin could end up being just as important as the win. If Geelong lose to Sydney, then the Dockers can nab sixth spot if they cover any percentage gain North Melbourne will get in their likely win over GWS. Even if Dockers skipper Matthew Pavlich is again a late withdrawal, Fremantle showed in their big win over the Roos that they are capable of finding a variety of avenues towards goal. Melbourne’s players have endured the season from hell and their thoughts have probably already drifted to their end-of-year holiday.

Key: With North Melbourne likely to slaughter GWS, Fremantle might need to beat Melbourne by more than 100 points if they are to nab sixth spot. But if Geelong beats Sydney, then sixth spot is off the table, and the Dockers may prefer to win by a low margin and finish eighth in order to set up a western derby final.

What a week it’s been at Carlton! After unrelenting speculation over his tenure, Ratten finally received the dreaded news on Thursday that he would not be coaching the club in 2013. Ratten will have one last stint in the hot seat against the Saints. Both St Kilda and the Blues are out of finals calculations and have nothing to lose, which could make for a high-scoring affair.

Key: The mindset of Carlton’s players. Ratten’s sacking could either galvanise the Blues for a big win, or leave them so depressed with feelings of guilt that they get pumped against the Saints.

Only the most ardent Tigers and Power supporters would care much about this dead rubber. Richmond are definitely a team on the rise, but a series of close losses this season ultimately cost them a finals berth. The Power – as it stands – are a rabble both financially and in terms of on-field results, but hopefully the installation of a new coach will turn around their fortunes.

Key: Richmond are clearly the superior side, but with little to play for will they be mentally switched on? Even if they’re not, they should still be good enough to beat the Power.

Brisbane coach Michael Voss has breathed new life into his team this season, with his fledgling list a chance to post 10 wins compared to last year’s return of four. The 15th-placed Bulldogs have netted just five wins this season, and will no doubt call 2012 a “development year”. Brisbane, buoyed by wins over Adelaide and Port Adelaide, are a good chance to make it three victories in a row for the first time since 2010.

Key: Brisbane skipper Jonathan Brown is yet to kick more than five goals in a game this season, but it could be his day for a big haul against a defence that has leaked goals all year.

The situation between Adam Treloar and Collingwood is set to be a messy and ugly encounter for both parties, with the unfair treatment of Treloar by the Magpies posing more than just a one-time disaster for the club.

Essendon’s tumultuous 2020 AFL season has taken another twist after the club sacked football boss Dan Richardson on the eve of the trade period. 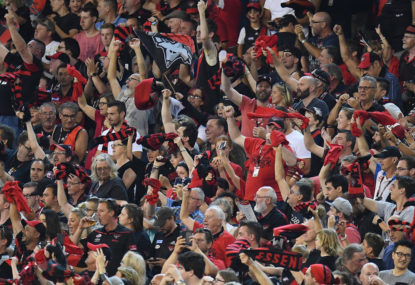 On August 7, 2019, Adam Treloar discussed in a very raw way both his battle with anxiety and love for the club he chose to join from Greater Western Sydney.

In sport, there’s a sense of inevitability that separates the greats from mere mortals. A clear demarcation. Not just of skill, but of mindset.

The Gold Coast Suns received a club-saving raft of concessions at the end of the 2019 wooden spoon season.