Continuing my series looking at the NBA’s division for 2012/13, we look at the Central Division.

Summary: The sole goal for the Pacers this off-season was bringing back Roy Hibbert. Although it cost them max money Hibbert has time on his side and could eventually develop into the calibre of player that such a large contract is reserved for.

At 7’3” Hibbert is a rare breed of NBA talent in that he is really tall so you have to pay him more than his output suggests. (For any new fans to the sport this is actually a law in the league.)

Throughout the Playoffs this year Hibbert averaged a double double but was no match for the hidden superpowers residing in Joel Anthony’s forehead.

Negativity aside, during the regular season Hibbert ranked inside the league’s top twelve centers in points, rebounds, assists, free throws made and blocked shots. When pooling the online NBA talent together, Hibbert really begins to showcase his worth and possesses a top five Twitter account.

The Darren Collison and Dahntay Jones for Ian Mahinmi trade with Dallas still has me scratching my head three months after the fact. Both Collison and Jones expire after this season whilst Mahinmi will make $16 million over the next four years. Considering Indiana just invested a first round draft pick in a similar energy guy (Plumlee) combined with the fact that Mahinmi barely scratches the league’s top 50 centers for rebounds (38th) and blocks (46th), it appears as though Indiana have a vendetta against logic. Then again It’s not often you come across guys in the NBA named “Ian”. So I can see where they’re coming from in that regard.

The additions of D.J Augustin and Gerald Green are impressive from a depth and draft bust reminder perspective. Further development from Paul George and a full camp with last years acquisitions George Hill and David West should see Indiana as a serious division title contender. If the Pacers are successful it will be the first time since they’ve won the Central division since Chris Mullin was on the squad. That’s actually not true, they’ve won it since then. I just really wanted to mention Chris Mullin.

Summary: With former MVP Derrick Rose ruled out until March, the Bulls Championship prospects have followed Carlos Boozer’s drawn on hair out of Chicago. After losing 80% of the sixth most productive bench in the NBA due to owner Jerry Reinsdorf’s reluctance to cross the luxury tax threshold (a fancy way of saying “cheap”), it’s all but guaranteed that Chicago won’t sniff the 75% win percentage of a year ago.

The Bulls still have a defensive genius calling the shots from the sidelines in coach Tom Thibodeau but there’s no doubting the drop off in talent. With Nazr Mohammed, Vladimir Radmanovic and Kirk Hinrich all expected to play a significant role this season the Bulls should find themselves among the league leaders for League Pass blacklisting.

Writing off the Bulls appears to be the current flavor of the month but a drop from first in the conference to outside the playoffs in one season seems too steep for even a gigantic pessimist such as myself. This squad still has quality pieces in Luol Deng, Joakim Noah and Carlos Boozer. A forty-five win season and a bottom end seed in the Playoffs should be the objective during the regular season. If this comes to fruition and Rose returns at close to 100% the Bulls would instantly become the clubhouse leader for “Teams nobody wants to face in the Playoffs”.

There’s no doubting that Miami, Indiana, New York, Brooklyn, Philadelphia, Boston and about seventeen other teams all have better squads than the Bulls on paper at present. If things do go south early Chicago could opt to activate the tank switch and turn their attention to twelve months from now.

Summary: The Bucks are coming off a year where Monta Ellis had the worst shooting season since his rookie year and Brandon Jennings attempted more three-pointers than he made two-point field goals. If you can’t think of anything more enjoyable than inefficient basketball then you need to announce Milwaukee as “home sweet home”.

Draftee acquisitions John Henson and Doron Lamb are a pair of nice project pieces. Milwaukee ranked twenty-second in scoring defense, twentieth in defensive rebounds and fifteenth in blocks last year. Despite consistently being mistaken for a stray coat hanger Henson should see court time early as the former Tar Heel not only possesses a supreme ability to preserve the state of garments he also excels at blocking shots and grabbing rebounds.

Lamb on the other hand is blessed with great shot selection and hit over 47% on three-point attempts in his career at Kentucky. Lamb should fit right in as the ugly duckling on a Bucks squad who had the second most field goal attempts in the league last season. Considering Lamb’s back court buddies are Ellis and Jennings I hope Doron likes defense because there’s no way in hell he gets a shot off all season.

The re-signing of Ilyasova was expensive yet warranted given his production last season (13 points, 8 rebounds) and the Dalembert trade was a bargain pickup at Daryl Morey’s summer garage sale. Dalembert fills a need and only cost the Bucks two guy’s named “Jon” who you’ve probably played pick-up ball against down at your local Y, and point guard Shaun Livingston who has had his knee rebuilt more than the Bucks have had rebuilding years.

Summary: Five years from now Andre Drummond could be starting in an All-Star game or be responsible for having 57 different coaches fired. We’ll be calling him “Asterisks” Drummond until further notice. “Asterisks” has the physical gifts to be a dominant centre in the league but at the same time possesses the passive nature that could see him follow in the footsteps of mega busts Kwame Brown, Stromile Swift, Michael Olowokandi, Tyrus Thomas and Rafael Araujo. That last name you might have to Google.

Last season the Pistons were an impressive 3-33 when allowing their opponents to score 96 points or more. Considering the league average was 95.87 points per game It’s no surprise that a loss happened more often than not. Detroit also ranked twenty-ninth in the league for defensive rebounds and twenty-sixth for blocked shots. It would be nice if Asterisks Drummond could fully develop before the end of this paragraph.

By doing a reverse Joe Dumars and shredding a year of salary via the Ben Gordon for Cory Maggette trade, Joe Dumars has opened up cap space and given Joe Dumars another shot at overpaying a small forward without a true position to a long term deal in next years free agency period. Be that as it may (it will) with a core of Greg Monroe, Brandon Knight, Rodney Stuckey and Asterisks Drummond the Pistons future prospects look healthy. Just keep Joe away from the cheque book and It’ll be ok.

Summary: Apart from anyone with a pulse who would have predicted that Miami would end up winning a title before Cleveland?

You can colour me shocked as well, Dan Gilbert.

The positive for the Cavs post-LeBron fallout has been the emergence of Rookie of the year Kyrie Irving. Irving came into the league with a ton of question marks given his collegiate career barely broke into double figures. That was all put to rest within about 41 seconds of Irving taking the floor in his first NBA game. Kyrie not only dazzled with his skill set,  he went on to produce one of the most underrated and statistically pretty seasons in modern day basketball. I don’t care if Luke Walton winds up starting on this Cavs team, as long as Irving is healthy this franchise is in good hands.

Just like a year ago the Cavs made another head scratching choice with the fourth selection in this years draft when opting for Syracuse sixth man Dion Waiters. There’s no crime in utilising a top five selection on a guy who followed the same path as Marvin Williams and built his reputation playing against second units at the collegiate level. It’s just that Harrison Barnes looked to be the more appropriate pick. Yes, I’m still bitter.

The addition of Jon Leuer and rookie Tyler Zeller should further add to an already scrappy and offensively incompetent front court which every Cavs fan should be salivating over.

The Cavs made the right decision when choosing to preserve their current cap space as opposed to getting all New York Knicks on us and blowing it all just for something to do. Regardless, I can’t see any major developments (Kyrie excluded) coming out of Cleveland this year.

NBL coach delivers the most hilariously savage spray ever

Conner Henry was none too happy with his Adelaide 36ers during a fourth-quarter timeout! 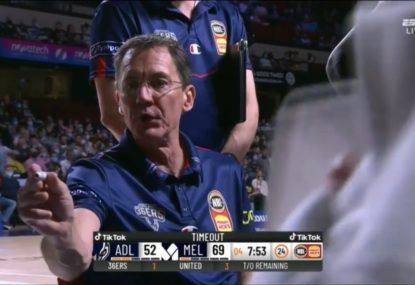 NBL coach delivers the most hilariously savage spray ever

We have had a wild week in the NBA so far, from James Harden teaming up with Nets, to games getting postponed due to conavirus protocols.

The NBL season begins on 15 January with the Adelaide 36ers and Melbourne United going into battle in Adelaide, the beginning of an intriguing season for more reasons than just the effects of COVID-19. 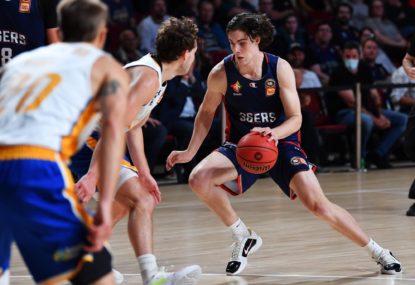