Can Bosnia break their hoodoo?

While traditional heavyweights such as France, England and Spain garner most attention surrounding the European section of the 2014 FIFA World Cup qualifiers, it is a lesser-known side in Group G who look set to become one of the stories of the campaign.

Bosnia and Herzegovina have never qualified for a FIFA World Cup, let alone any major football tournament, yet currently sit atop of their UEFA qualifying group midway through the campaign, three points clear of the second-placed Greece.

Should the ‘Dragons’ — as their followers affectionately know them — maintain their spot in first position, they will go directly into the draw for the FIFA World Cup Finals scheduled for Brazil next year.

It is an exciting prospect for a nation still struggling to find its feet following the bloody 1990s war involving the break-up of Yugoslavia.

Bosnia’s declaration of independence in March 1992 led to a four-year armed conflict that saw around 100,000 people killed and over 2.2 million people displaced, confirming it as Europe’s most devastating war since World War II.

Nearly two decades on since the conclusion to fighting, the replacement of damaged infrastructure across the country remains slow and ongoing.

Combined with the fact the nation’s unemployment rate sits at an estimated 44.54 percent, it is little wonder Bosnia is considered one of Europe’s poorest countries.

For many of its three-and-a-half million inhabitants (as well as, arguably, its several million diaspora), the performances of the national side provide a much-needed distraction from the struggles of everyday life.

Unfortunately, for its loyal supporters, qualification to major tournaments has eluded the Dragons to date – often in cruel circumstances.

First, there were the qualifiers for the 2004 Euros.

Bosnia had one foot in the door when it faced Denmark in the final qualifying match in Sarajevo.

A win against the Scandinavians would have guaranteed progression to the tournament, however the Dragons were forced to settle for a heartbreaking 1-1 draw, sending the side tumbling to fourth position in the group and out of contention.

Then, more recently, there was Portugal: the Cristiano Ronaldo-led line-up who would douse Bosnia’s hopes not once, but twice.

Despite earning a second-placed group finish for qualification to the 2010 FIFA World Cup – their best effort to date – the Dragons were bundled out at the final hurdle when they commendably succumbed 0-2 to the Portuguese across two play-off legs.

Two years later, and Portugal again played the role of villain, this time in the qualification play-offs for the 2012 Euros in Poland and Ukraine.

Although the Bosnians held their opponents to a 0-0 stalemate on home soil in Zenica, they were ultimately dismantled 6-2 by a superior Portuguese outfit during the return fixture in Lisbon.

If such disappointment was not enough to raise the ire of Bosnians, many felt the Dragons were initially cheated out of a first-place group finish – and, thus, direct qualification – and should not have been forced to battle it out in a knockout tie against Portugal in the first place.

In a tense match to round out Euros qualifying in Group D, Bosnia was on their way to taking out top spot as they led a star-studded French side 1-0 at the Stade de France.

As fate would have it, in the 77th minute of the match, and with Bosnians daring to dream, Scottish referee Craig Thomson awarded a controversial penalty to France, allowing the home side to level the scores.

The match ended 1-1, with the result sending the French top of the group and knocking the Dragons into second place, forcing the latter into an ultimately fateful sudden-death play-off.

With new tournaments and opportunities, however, comes new hope.

The signs for Bosnia are looking ominous, too, with the side not only unbeaten to date in qualifying, but dominating almost every opponent they have come across.

Aside from an impressive goalless draw against Greece in Athens, Bosnia has recorded convincing home victories against Latvia (4-1), Lithuania (3-0) and Greece (3-1), as well as an 8-1 demolition of group minnows Liechtenstein on foreign soil.

Yet, the run home for the Dragons is not going to be an easy one.

While the side should have little trouble claiming maximum points against Liechtenstein at home, they face testing trips to Latvia and Lithuania, on top of a home-away double against Slovakia in the space of four days in September.

If Bosnia is serious about making the most of its campaign, it cannot settle for claiming anything less than a win and a draw from its three away fixtures.

In addition, it cannot afford to be complacent and underestimate Slovakia – nor Liechtenstein, for that matter — during their clash on Bosnian soil.

While the Slovaks currently lag behind in third position on eight points – five behind the Bosnians – they are a dangerous side with a proven record, which recently includes progression to the Round of 16 at the 2010 World Cup.

A loss in Zenica on September six has serious potential to plant a roadblock in the way of Bosnia’s plans and throw Group G wide open. A draw would, at least, keep the boat steady.

There is little doubting the Dragons will be relying on captain Edin Dzeko to lead the way.

The prolific Manchester City striker has been instrumental to the outfit’s success thus far, having scored an accumulative seven goals in each of the side’s victories.

Fortunately, for the Bosnians, he is not alone.

The trio have scored 11 goals between them across the five qualifiers to date.

Such an imposing attack force has coincided with a defence of steel: for the 18 goals Bosnia and Herzegovina has scored so far, they have conceded just three.

With an average age of 26, and several of its squad playing regular top-flight football across Europe, it seems as though Bosnia has never been better positioned to finally qualify for a major tournament.

After all the nation has been through, both in social and sporting terms, it is anyone’s guess what qualification to the World Cup would do for the morale of the Bosnian population.

Play to the whistle, not the flag! 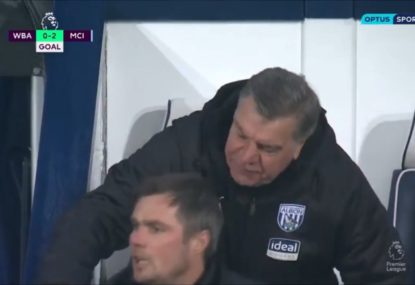 Tasmania has had bids to join the A-League before and the last round of expansion had the Robert Stamoulis and Robert Belteky group. They were still said to be interested late as last year, but out of the blue has emerged a competing bid from a new consortium of anonymous backers. Stamoulis and Belteky are […]

Milan crowned winter champion in Serie A, but is it enough for the Scudetto?

The chances to see the tricolour stitched on a different jersey than Juventus’ black and white stripes is very high, but it remains to be seen if the those stripes are red and black or blue and black.

Milan crowned winter champion in Serie A, but is it enough for the Scudetto?