David Beniuk
3rd May, 2013
1
Join the conversation
Advertisement
Write for The Roar

Bookmakers have installed the Kangaroos at $1.38 for the Bellerive match despite their 1-4 record in the opening five rounds of the premiership.

Port are enjoying their best ever start to an AFL season at 5-0 but are rank outsiders at $3.05.

“I was probably a bit surprised to see that,” Swallow told reporters on Friday.

“We feel like we’ve got a bit of work to do to get to where they are.”

In North’s favour is the quality of opposition they have faced in the opening rounds, which have included narrow losses to big guns Geelong and Hawthorn.

By contrast, the Power’s scalps include strugglers Melbourne, GWS and Gold Coast.

Last week’s win over West Coast was arguably the Power’s most impressive of 2013 and their credentials as potential finalists, after they finished 14th last year, will go on the line in their first outing at Bellerive.

Stand-in coach Alan Richardson said he was not surprised by the odds.

“We think (the Kangaroos are) incredibly unlucky to be where they are,” he said.

“Who we’ve beaten are certainly not on the same ladder position as who the Kangaroos have played.”

Swallow said his side had pinpointed the reasons for their near misses, which included a capitulation after leading the Cats by 41 points in round two.

“We know our method’s been really good,” he said.

“There’s been a couple of things that have let us down in each of our games, just small things but they add up to a small loss.

“There’s a few little things that we can do, a couple of little tactics we think we can employ.”

The battle between two of the competition’s emerging midfields is shaping as crucial and Swallow said his side would need to match the likes of in-form Port skipper Travis Boak and Hamish Hartlett.

“Port have been super impressive,” he said.

“They’ve got a few guys in from other clubs and a couple of young guys who have come into their side and really given them some run and dash.

“Their midfield’s starting to look really deep so we’ve got to match it.”

The Power will be without defender Jackson Trengove (foot) who has been placed on the club’s long-term injury list, and coach Ken Hinkley who did not make the trip to Hobart after suffering a virus midweek.

Coaching and strategy director Richardson said preparation had been unaffected.

“Most of our planning had been done anyway but so far it looks pretty normal,” he said. 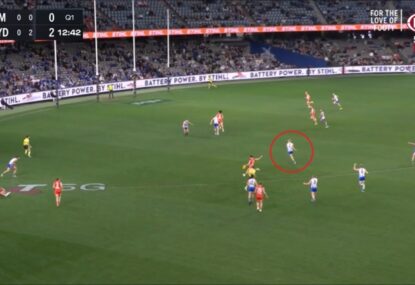 The Bomber wasn't happy about the contact of the tackle, and he gave the umpire a serve. 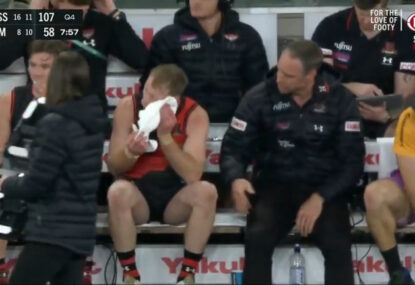 The umpires seemed to miss the fact that the ball went outside of the behind post, but left everyone wondering what they were reviewing. 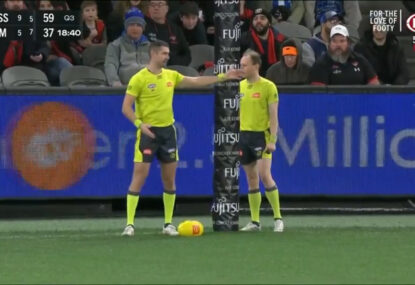 Matt Guelfi looked to enter the protected zone after a mark, but the umpire put the whistle away after giving the Kangaroos a 50… 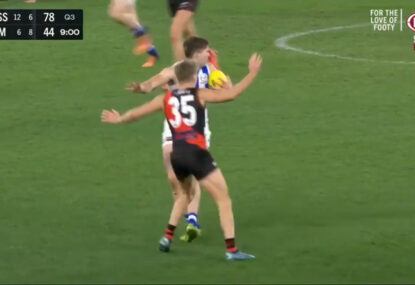