If sport's a drug, then hook me up

Sometimes I need to turn my brain off. I think too much and most of this thinking is non-productive to the point of being counter-productive.

I long for knowledge and read, view and study, with some hope of understanding – but trying to do this all the time can make you crazy.

So every week, I give myself a break. I put the injustices of the world and its geo-political and economic uncertainties to the side, and sit down to watch the footy.

Yes, you can dismiss it as a pointless distraction, but on some level, everything is.

As the writer of Ecclesiastes stated:

“I applied my mind to study and to explore by wisdom all that is done under the heavens. What a heavy burden God has laid on mankind! I have seen all the things that are done under the sun; all of them are meaningless, a chasing after the wind…For with much wisdom comes much sorrow; the more knowledge, the more grief.”

It was coming to understand this, that lead me to re-discovering my love for rugby league.

It’s magical, and I love it. I still can’t switch it off to the point where Ray Hadley is anything but a blustering bigot and a bully – but I can turn the volume down and still enjoy those games too.

Watching rugby league has been the best thing for me, as someone who takes himself, and his life so seriously, sitting and watching two teams run around for 80 minutes is a great form of relaxation therapy.

I remember deciding I no longer cared about rugby league. It was when the Balmain Tigers became the Sydney Tigers. I felt so betrayed when they hired the traitorous Terry Lamb as coach – the man who I still think caused the Tigers to lose the ‘88 grand final through foul play.

Betrayed, I resolved myself to not following any team, and only watching State of Origin and the grand final.

The Super League war did little to restore my faith in the code, but I remember watching the 1997 grand final, Newcastle versus Manly, even though I didn’t support either team – I knew that I did not want to see a Geoff Toovey, Craig Field, John Hopoate, Mark Carroll and Terry Hill side win the grand final.

I liked Menzies, Gillespie and Cliff Lyons, but I loved Paul Harrigan more than anyone else playing at the time, so secretly, I wanted Newcastle to win.

The Darren Albert try with seconds remaining was a perfect way for it to play out. As Albert ran to score, I was on my feet cheering, I was so happy, joy had taken over. I was almost as ecstatic as an ecstasy fuelled Andrew Johns.

Instead of embracing it, after the game, I reminded myself that sport was a trivial distraction aimed at keeping the masses stupid and distracted from “the real game”.

I re-committed to not allowing myself to get back into rugby league.

“Sport is the new opiate of the people,” friends would say, decrying how sport in Australia gets much more funding than the arts.

When people quote Marx’s “opium of the people” line, I immediately think they are just dealers of other drugs, saddened that there drug isn’t more popular with the masses – a word used for a cohort of people who they dismiss as ignorant fobs that aren’t “their audience” anyway.

But really, the arts is just another form of opium, and usually an expensive and unfulfilling opium if we were being honest.

Marx was referring to religion as the “opium of the people”, and while it is not a new idea, let us replace “religion” with “sport” in Karl Marx’s writing:

“Sport is the sigh of the oppressed creature, the heart of a heartless world, and the soul of soulless conditions. It is the opium of the people. The abolition of sport as the illusory happiness of the people is the demand for their real happiness.”

Remove religion/sport and replace it with real happiness – in the form of a book of Karl Marx’s essays, maybe some Tolstoy, a splash of Chekov and ta-daa! The population would really be happy.

Rubbish. Marx has no more claims on the real than sport or religion, especially when it comes to happiness. If opium and ignorance are both bliss – rugby league is my drug of choice. Take that ASADA!

Remove sport and suddenly everyone will be truly happy, lining up to go and watch their local theatre society’s production of The Seagull. No, no they won’t.

I’d rather they (and me) be happy at least some of the time, then forcing them down some ‘path to knowledge’ determined by intellectual snobs, that might ultimately make people more miserable.

Why force them to watch Samuel Beckett’s Endgame? Let them watch the big game and think that Sammy Beckett used to be halfback for Newtown in the 70s.

It might be that it is best for all of us, if we allow people the sense of control that comes from holding the remote control and swearing at the TV.

Allow them to truly love the simple pleasures of watching their team go around each week, bragging about the achievements of teams and individual players as if they are collectively theirs somehow.

Marx might say it isn’t real, but I say he isn’t anymore either, so let’s not get too carried away.

Usually it comes about for the simple reason that someone they cared about greatly also supported the team. Now this means that these supporters can take a slice of the victory, they can mourn the losses, celebrate the battles – wear it like a medal, or carry it like a scar.

Yes, it might ultimately be a meaningless distraction, but I don’t believe that it is always a bad thing. Some distraction is necessary and helpful.

Yes, it is a form of opium, but as a member of the “people”, can I say, that I love it when I can get some opium. I’m against drugs in sport, but as a drug, sport is a pretty healthy one – just don’t take it too seriously.

I still don’t follow a team (which makes me a ruthless tipper), but I love watching the games. Rugby league has given me something that I needed as a person. A distraction, a healthy distraction. 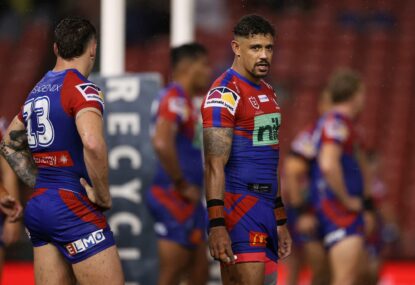 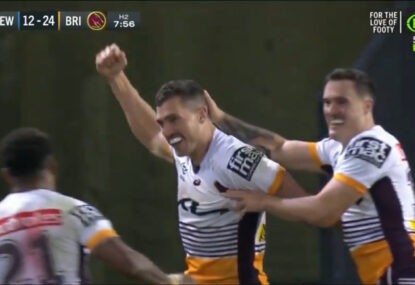 The commentators were not happy - and neither were the Knights players and coach. 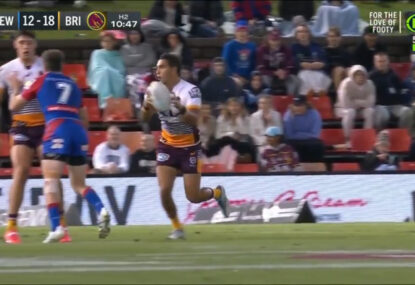 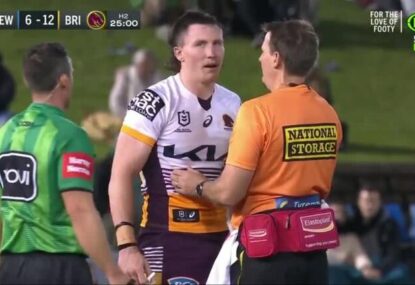 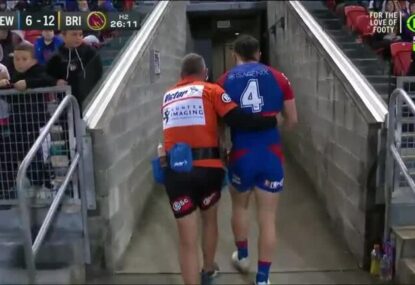