Cometh the 2013 tour of Australia by the British and Irish Lions, cometh a tour book, The First Lions of Rugby by Sean Fagan.

This new, enthralling and most complete account of the first rugby tour of Australia by a British team will entrance and enthrall Wallaby supporters in Australia and Lions supporters, whether they are on tour with the ‘boyos’ or back home in the United Kingdom.

I would make the claim that Sean Fagan knows more about the early decades of rugby union and rugby league in Australia than anyone alive. His research is meticulous and detailed, even down to the origin of the ‘rah, rah’ description of rugby types.

His story of the first Lions tour back in 1888, 125 years ago, is a rattling good yarn, a meticulous record of the tour which ends in a way in the tragedy of the death of the team’s captain, Bob Seddon, in the Hunter River at Maitland during the tour, and the suicide of the team’s star player, Andrew Stoddart, the first of the brilliant Lions centres and Seddon’s successor as captain of the First Lions, in 1915.

Both these episodes are told in some detail and put into the context of their times which gives them a poignancy that makes both deaths hard to forget. The Lions are going to visit Seddon’s grave next week when they are in Newcastle to play a NSW Country side.

At some stage of the tour there should be a ceremony celebrating the achievements on the tour of Stoddart, the first superstar of rugby in Australia.

Stoddart is the only man to captain England at cricket (where he was a dashing, swashbuckling batsman and led England to an Ashes series victory in 1894/95) and at rugby. He was also the first captain of the Barbarians, which gave him a link for both sides in the Lions – Barbarians match in Hong Kong.

Among the many excellent illustrations in Fagan’s book is a cartoon of Stoddart with 17 caps on his head. There is another drawing of an athletic ‘Mr Stoddart Passing The Ball.’

This an era when teams played with nine forwards and only six backs. Two of the backs, the halves, stayed very close to the  packs. This meant that the outside backs had huge areas of the field to run in, if they could get the ball to these runners.

Stoddart was a great runner and a clever passer of the ball. This later skill made him the star and the indispensable player on the tour for the Lions. In the space of a couple of months he played in 28 of the 35 rugby matches (there were also 19 matches of Australian Rules football) for the Lions.

He never played in a losing side for the Lions, and he amassed 73 points including 20 tries. What a player!

Fagan makes the case, and proves it with his documentation, that the First Lions revolutionised the way rugby was played in Australia and New Zealand.

Before the Lions made their tour, rugby was a hacking (kicking violently at the shins of opponents) game. The ball was caught up in seemingly never-ending scrimmages. Only occasionally was the ball hacked clear for a back to pick it up and run with it.

This is why the numbers of forwards was stacked over the number of backs. The First Lions, Fagan points out, introduced the principle of ‘heeling back’ in the scrimmages. In Australia and New Zealand it was thought that heeling back in the scrimmages and scrums put the other forwards ahead of the ball and, therefore, offside.

By heeling back, the First Lions were able to get the ball out to their backs, especially Stoddart. Their passing skills bamboozled their Australian opponents. Tommy Haslam, a lively fullback, intensified the confusion by developed a trick called the ‘dummy pass’ which local players found impossible to resist.

‘Utterly unselfish, passing before being collared,’ was said by The Referee to be a feature of the play of the First Lions.

I chatted with Sean Fagan a week or so ago about his excellent book and the consequences of the tour. He told me some wonderful little pieces of colour from his research:

The steamship Kaikoura which brought the First Lions to Australia on a six weeks voyage also carried 300 stoats and weasels bound for the farmlands of New Zealand to get rid of the rabbits. Also in an ice chamber were 400,000 salmon ova packed in moss which ended up in the rivers of Tasmania and created the export trade of salmon farming.

The Waratahs team that played the First Lions at the SCG wore maroon jerseys.

Among the players in the Waratahs was Charles Wade, later to become a Premier of NSW.

The tour lost 900 pounds, which was recouped by its promoters Lillywhites with the sale (abut 20,00 pounds worth) of its sporting goods products throughout Australia and New Zealand.

The words ‘barracking’ came from the contests played in the 1880s between resident players and the soldiers from the local barracks.

In a last letter home, written the night before he drowned, Seddon wrote: “…Every man is thoroughly enjoying himself and to look at their faces is to see the great good it has done most of our team.”

As far as the history of the football codes in Australia were concerned, the tour of the First Lions, with the excitement generated by the way they played and where they had come from, a led to a revival of the rugby code in NSW and Queensland.

Australian Rules retreated for 90 years or so behind the Barassi Line, a geographical entity that ran along the borders of Victoria, South Australia and up to the Northern Territory. Rugby, in its union and league incarnations, flourished and continues to flourish in Queensland and NSW.

“After 1888 there were exciting and revolutionary new ways of playing Rugby,” writes Fagan. “The game dramatically, radically, and irrevocably changed for the better – for the players and the spectators.”

This brings us to tonight’s match between the Western Force and the Lions. An obvious point to make is that this is an important rugby match, with a sell-out crowd in Perth, that will be played in the former enemy AFL territory well behind the Barassi Line.

If ever there is a sign that John O’Neill’s brave move to have four, and then five, Super Rugby franchises in Australia is a winner in the short and long term for Australian rugby, this game provides it.

The last time the Lions played in Perth, they scored over 100 points. This sort of outcome is not likely to ever happen again.

Another point is whether the Lions will keep to the passing game that was pioneered by the 1888 side and has been the glory of Lions rugby ever since.

The 2013 Lions side does not have the classy halves that have been an invariable feature of Lions side over the decades. There is power and pace in the centres and among the loose forwards.

How Warren Gatland melds these strengths and weaknesses into an attractive and winning team will be a fascinating study during the tour. And tonight’s match will start to give us clues as to how or whether this is going to happen.

I reckon there is no better way, though, to get into the spirit of this Lions tour than to immerse yourself for some hours in the fascinating history of the First Lions. And then go on to enjoy the latest pride of the Lions as they follow in the path set out so splendidly by the pioneers of 125 years ago.

Read the book and enjoy the tour!

The First Lions of Rugby by Sean Fagan (slatterymedia.com) 2013 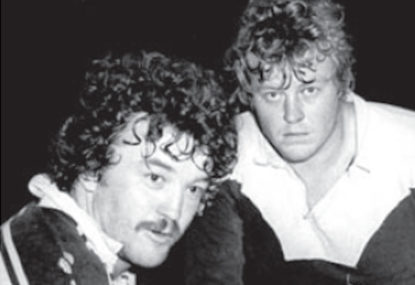