The Tigers played tough in their win against Penrith on the weekend. The chips were down, they were missing their best player, but they showed a lot of heart and courage and managed to claw out a 20-18 win.

A team cannot thrive while its marquee player is so out of form. Marshall is more than just the face of the Tigers, he is one of the faces of the game.

If I just mentioned a player named “Benji” there is no doubt everyone would know who I mean. For such a big name to be so out of sorts is bad for Wests and bad for the game.

Personally, I think Marshall is burned out and lacking ideas. His ongoing form loss since the 2011 finals series has been abrupt, and one that could have easily been prevented earlier in his career.

The root of the problem is simple. Ever since Scott Prince left for the Titans at the end of 2006, Marshall has not had a real halfback.

No Scott Princes in that group. The best football Marshall has ever played was in 2005, when Prince was running the show, and in 2010 and 2011, when Rob Lui was briefly able to plug the gap.

Marshall is not, and has never been, an organising half. His strengths are the flashes of sublime skill he shows, whether it be a wild sidestep, an outrageous pass or a deft kick.

When Prince and Lui were able to run the team and call the plays, Marshall was able to float in and out of the games as he saw fit, applying his skills and unpredictable brilliance wherever they were needed.

It is highly uncommon for a successful club to go for more than a few seasons without either developing a young halfback, or poaching one from another club.

As a Canberra fan, I am required by law to believe that Tim Sheens is a coaching genius, but the failure of such an innovative and experienced coach to develop an adequate partner for his greatest attacking weapon is plain bizarre.

It is my belief that Tim Sheens wanted to show how clever he was, and build a successful team without relying on having a traditional halfback. He tried to use Robbie Farah in the playmaking role, but mismanaged the team appallingly and the repercussions of that decision are now being felt.

Don’t get me wrong, I love Robbie Farah. I think Cameron Smith, Robbie Farah and Danny Buderus are the three great hookers of the NRL era. Smith and Farah are possibly the most skillful hookers of all time, and both play a significant role in the structure of their teams attack.

But Farah cannot do it all. As good as he is, he can’t run the team from the middle of the scrum. The concept of a spine has become common parlance in the past decade or so, and without the right combination at fullback, five-eighth, halfback and hooker it is difficult to remain competitive.

The baffling part of the whole episode is that it would have been easy to fill the gap. All the team needed was a relatively competent halfback who would take a little pressure off Marshall, act as a link between Farah and Marshall, throw a good pass here and there and steer the team round the park (There are so many candidates for this role it’s ridiculous. Luke Walsh, Daniel Mortimer, Isaac John, Brett Finch and Liam Foran would all be perfect)

Sheens tried to fit a square peg into a round hole by turning Marshall into a organising half, committing the classic error of weakening a strength to strengthen a weakness. The ill-fated experiment of placing Robbie Farah at halfback is another example of Sheens’ inability to adapt.

Of course, there are other mitigating factors. Marshall has developed a tendency to crab across the field, to the point where it becomes a major detriment.

This is balanced out by having Blake Ayshford and Chris Lawrence as his centres. Both are direct runners of the ball, and Lawrence in particular developed a deadly combination with Marshall.

But ever since Lawrence dislocated his hip early in 2011 he has not been the same. The pace, the zip, and acceleration that made him such a dangerous weapon are now diminished.

Joel Reddy can tackle, but on his best day he is not half as dynamic as Lawrence.

Marshall still has a lot left in the tank. He is 27, and could potentially play until his mid-thirties. But he needs a proper halfback and he needs one soon.

Curtis Sironen, for all his potential, will be a back-rower before long. He should be hitting holes off Marshall passes on the fringes of the ruck, not feeding him the ball from the scrum-base.

Perhaps the answer is Luke Brooks, an 18 year-old prodigy who is tearing the under-20s apart. I saw him play in a trial match early in the year, against fully grown men, and he more than held his own.

Then again, people said the same of Jacob Miller, who has since been shipped off to Hull without a second thought.

The bare facts are these: Since the 2005 premiership, the Tigers have made the finals just twice. I would hate for the last years of Benji’s great career to be wasted due to more mismanagement and coaching deficiencies.

So the Wests Tigers are holding onto Michael Maguire. I’m pleased with that. Coaches are convenient scapegoats and on most of the occasions they are sacked, the decision is objectively unjustified.

In a week of tantalising semi-finals, basement dwellers Wests Tigers have somehow conspired to break into the news cycle. What’s more, they’ve done so simply by standing still.

Michael Maguire’s tumultuous tenure at the Wests Tigers continues after a board meeting to decide the coach’s future was postponed. 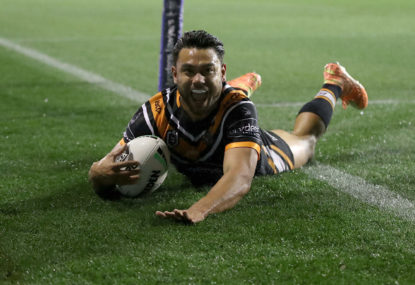