Sally Pearson has discovered her form and mojo in the nick of time to defend her world 100 metres hurdles title in Moscow at the 14th IAAF World Championships starting Saturday 10 August .

Pearson, who has struggled to recover from a hamstring injury all season, finally got a win on the board at the London Diamond league meeting on July 27.

While the time of 12.65 seconds was sluggish by her 2011 and 2012 standards, it was the win that was the important confidence boost for her.

“I think I have just as big a chance as everyone out there and I can’t wait to see what I can produce. Everyone knows I’m a big time performer and that is what I thrive on.” she said.

Pearson is the captain of the 46-strong member Australian team, the second biggest behind the 54 sent to Sevilla, Spain in 1999, and one more than sent to Deago, South Korea in 2011.

While so much gloom and doom has been written about Australia’s sporting performances this northern summer, especially when competing against Great Britain, one victory over Britain recently snuck under the radar.

The Australian 4 x 100 metre relay team defeated both British teams at the London Diamond League to confirm their qualification for the World Championships.

To be fair to the British A team, they did drop the baton.

What is so encouraging about the quartet of Jarrod Geddes, Nick Hough, Tim Leathart, and Josh Ross is that only the latter, is a relative household name.

The team was very slick in their baton changes and not only were up with the field the whole way in London, but the long back straight run by Ross, had Australia on the shoulder of the Jamaicans.

That was until Usain Bolt took the baton of course. Game over.

Josh Ross is an athlete reborn. After a couple of dark years struggling with depression and motivation issues he appears to back to his very best and has qualified for the 200 metres in Moscow.

Judging by his efforts in the London Diamond League, a semi final, if not better, is within his grasp.

Tallent, is such a big time performer and thrives on the occasion. The conditions in Moscow should suit him well.

Potential finalists include Collis Birmingham in the 10,000 and perhaps the men’s 4 x 400metres relay team.

It is perhaps time for Steve Solomon to leave the selection controversy of the London Olympics behind him and step up to the plate and lead from the front in this event, although disappointingly he has not qualified to run the individual race.

20 debutants make up the 46 member Australian team, who are competiting in their first international senior event.

This is very encouraging for the future of the sport especially on the back of the outstanding World Youth Championships results in Ukraine in July.

WATCH: Runner found to have only covered 185m in 'breaking' 200m World Record

An unfortunate blunder has taken the shine off the athletics world getting back up and running. 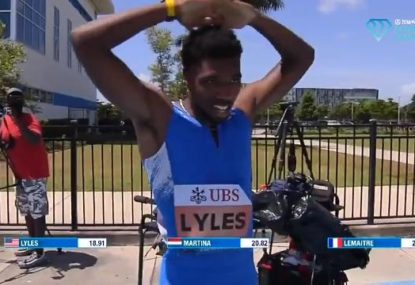 WATCH: Runner found to have only covered 185m in 'breaking' 200m World Record