Premiership could be anyone's to win

The top four is all but shut for 2013 and we have four really good contenders for this year’s AFL premiership.

Hawthorn, the Geelong Cats, the Sydney Swans and Fremantle will make up this year’s top four and, judging by their performances on a whole this season, deserve their place at the top echelon of the AFL. However, exactly where they will finish this year is still yet to be decided.

Even at this late stage of the season it’s hard to really predict who will win this year’s premiership.

Hawthorn are still very hungry to win back the premiership many believe was stolen from them last year, and I believe they are in a better position to contend than this time 12 months ago.

The Hawks have led the competition for much of the season and since April last year only three teams have been able to crack the code and beat them (Sydney, Geelong and Richmond).

Their performance against Collingwood on Friday night was a very professional display of their premiership credentials in a match which didn’t lack finals intensity.

The Hawks proved to be too good for the Pies again, having scored at least 119 points against them in their last five matches and at the same time remaining undefeated against them since Nathan Buckley took over as their coach at the beginning of 2012.

But if the Hawks are to ultimately win this year’s flag, they may have to somehow overcome the Kennett curse. It is very likely that the Hawks may face the Cats in either the preliminary finals or on the last Saturday in September.

The curse is well documented and it stretches back to the last time the Hawks won the premiership in 2008.

The Cats were the hot favourites to win that year’s flag after they had only lost one match for the entire season (against Collingwood in Round 9).

However, just as it seemed that a Cats premiership was a formality, the Hawks gate-crashed the party, played a defensive game and won by 26 points.

To this day the Cats have not forgotten that grand final loss and are undefeated in eleven subsequent meetings against the Hawks.

Which leads me to the Cats.

What is it about odd years and the Geelong Cats?

The Cats have won the last three flags contested in odd years (2007, 2009 and 2011), and if the trend continues, then you can confidently tip the Cats into saluting on September 28 this year.

Chris Scott has done a magnificent job in keeping the Cats in contention, when the media have repeatedly declared the club’s time at the top over following the departures of Mark Thompson and Gary Ablett.

There has also been the gradual loss of Matthew Scarlett, Cameron Mooney, Darren Milburn and Cameron Ling, and the fact that the Cats crashed out in the first round of the finals last year.

The media have also branded the Cats as being “too old and too slow.” This year, despite some hiccups (such as losses to the Brisbane Lions and Adelaide, in which they coughed up good leads), the Cats have proven to be too good.

Geelong’s defence was on show in their 66-point mauling of West Coast in its own backyard, and part of their defensive game plan was keeping Coleman Medal leader Josh Kennedy goalless, which they did successfully.

Scott’s men currently sit second on the ladder and can all but lock up two home finals if they beat the Sydney Swans in next Saturday’s showdown of the heavyweights.

The Swans are the only team to have saluted at the AFL’s graveyard since 2007, when they pulled off a famous 13-point victory in the penultimate round of the 2011 season.

That would be the last time that the Cats were defeated that year, as they would eventually streak all the way to a third premiership in five years.

There is no need to panic if the Cats are beaten on Saturday (an unlikely outcome), as they can always look back to what happened at the back end of 2011 for inspiration.

Now to the Swans, who continue to deliver week in, week out. There have been a few slip-ups this year, such as unexpected losses to Port Adelaide and Collingwood since May.

By virtue of its crushing victory over St Kilda, the Swans locked up a top-four finish for the second consecutive year, and while it’s certain the Swans will play their first final at the MCG, just who they will play out of Hawthorn and Geelong will depend on their performances against those two teams in the final fortnight.

The Swans showed the Saints no mercy in the second half, finishing with exactly double the score of their opponents (118 to 59), who will now finish 16th, their lowest placing since they claimed the wooden spoon in 2000.

Now that the Swans have beaten their fallen rivals, it’s time for the Swans to prove that last year’s premiership victory was no fluke.

And who better than to flex their premiership muscles against – the Cats and the Hawks.

A loss to Geelong will all but end their chances of a top two finish, regardless of how they fare against Hawthorn in the final round. Thus, it’s crucial that the Swans beat them both within a fortnight.

It’s not impossible, but the Swans will have to step their game up an extra notch if they are to remain in contention for a top two finish.

The Swans will take on mission impossible when they travel down to Geelong this weekend, but they were able to prove that this trip is anything but when they pulled off the aforementioned famous victory at the Cattery two years ago.

On that last Saturday in August two seasons ago the Swans forced the Cats into a barrage of unforced errors as they performed for their vice-captain, Jarrad McVeigh, who lost his newborn daughter Luella to a heart condition during the week.

John Longmire’s men have what it takes to beat the Cats, but the question will be can they beat them when it matters most?

That is then followed by a final round showdown against the Hawks at ANZ Stadium, in what will be the first ever Friday night regular season match played at the Olympic venue.

The decision by the AFL to schedule that match for Friday night is for two reasons: the Hawks, likely to be crowned minor premiers for a second straight year, must be given the maximum possible time to rest and prepare for its first final, likely to be against the Swans, and such a big match between two heavyweights (this is a rematch of last year’s grand final) deserves the Friday night stage.

Should the Swans enter this match on the back of a loss to the Cats, then this match could potentially be played out in two legs – first, the match in Sydney, and then the qualifying final in Melbourne, where the Hawks will have more support.

The difference will be that the matches won’t be decided on aggregate – and that the qualifying final match will matter more.

Now let’s take a look at the Fremantle Dockers, who for only the second time in their history will finish the season with a double chance.

A controversial decision by the Dockers to sack Mark Harvey and replace him with Ross Lyon has paid dividends, and this has been proven by their results over the last two years.

In the process, he has also turned them from premiership pretenders to contenders in the space of two years and they prove to be the dark horse of the competition.

Their 95-point victory over Melbourne, the Dockers’ biggest ever marginal victory outside of Western Australia, represented a strong indication that this team is serious about challenging for a maiden premiership, although two of their key players, Aaron Sandilands and Hayden Ballantyne, suffered injuries and could be in doubt for the premiership bid.

And with the West Coast Eagles struggling at the moment, the Dockers’ ongoing season of success could give Western Australia fans some joy as they hope for the state’s first premiership since 2006.

Ross Lyon’s men have a dream run home, although they do face finals aspirants Port Adelaide at home this weekend, followed by another trip across the Nullarbor to face St Kilda in the final round.

Barring major slip-ups from Geelong and Hawthorn, both of whom face the Sydney Swans in the run home, the Dockers may have to travel east again in the first week of the finals, to face either the Cats or the Hawks at the MCG.

But nevertheless this year is proving to be a successful one for Fremantle, and Ross Lyon deserves all the credit for turning the Dockers into premiership contenders.

The victory over Melbourne was their 15th for the year, equalling their best effort which was achieved in 2006. Including their draw against Sydney in Round 8, this is currently their most successful season ever, premiership points wise.

Two victories from their final two matches, both expected, will make for the most successful season ever by the Dockers.

It’s set to be an intriguing finals series this year. Who do you think will win the premiership this year?

'On the angry pills': Could Buddy cop a week for this incident?

Buddy’s wait for 1000 goals could be delayed after this incident with Luke Ryan. 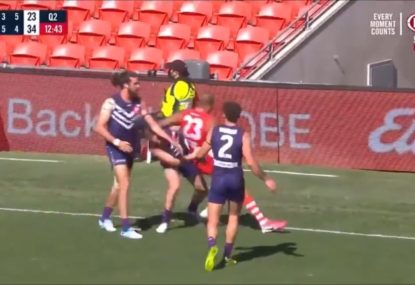 'On the angry pills': Could Buddy cop a week for this incident?

Freo defender's hilarious reaction to being 'stepladdered' by Isaac Heeney

Mark of the Year? 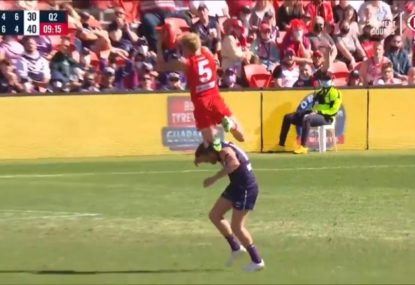 Freo defender's hilarious reaction to being 'stepladdered' by Isaac Heeney 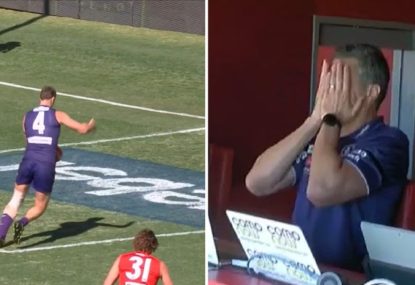 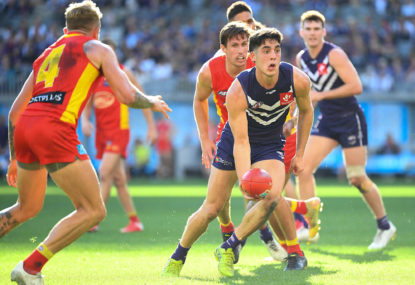