Born in France, 1819, Jacques Offenbach was a master cellist, conductor and wrote dozens of operas during his lifetime.

Oh how he was adored by the public, for whom he dedicated his life to writing witty, satiric pieces of musical comedy.

But sadly, his life was cut short. On his return home one day from the shops, he unlocked his front door and dashed upstairs to continue work on his latest opera, but would never live to see its completion.

For standing before him was a figure shrouded in blue, red and yellow (which was bad enough), shining mystically as the afternoon sun washed across the polished hardwood floor of his study.

“What are you? And how did you come to be?” cried Offenbach, completely forgetting to put the milk away first.

The figure stepped forth from the light and it was fearsome to behold; his eyes deep-set and beady, his head a grotesque amalgamation of man and bird. Then he spoke:

“I am Claude Crow, but you may call me Curls, and I have come to reward you with a glimpse of the future, so vast is your responsibility for what is to come.”

He then opened his beak and music poured forth – music from more than a century beyond. It was called ‘The pride of South Austrlia’.

And when it was done, Curls said “Whaddya reckon?”

Offenbach, who was on the floor clutching his ears, begged to know what the song was, for its hideousness it sounded hauntingly familiar.

When Curls responded it was based upon the music and melody from Offenbach’s ‘Geneviève de Brabant’ he felt so guilty he died there on the spot from heart failure.

Fast-forward to 1992 and new kid on the AFL block was looking for a theme song. It had been a long time since the early 60s, when the last of the VFL teams that survive today had their tunes locked in.

With this in mind, the Eagles had tried, and failed, to compose a new contemporary piece to compete with the classics. So with this misfire in mind, it’s understandable the Adelaide brains trust got together to pick an old timey tune and cobble together some new lyrics.

It’s so awkward – adding syllables where they don’t fit, and stretching out words to cover places where they should have fit. And that rushed ‘go crows!’ at the end? Sheesh.

Some may be familiar with the tune from one the US Marines have used for a century now, and they may find ‘The pride of South Australia’ an inspiring tale of camaraderie and strength.

Sadly, though, its original use (and one made familiar to me through participation in the grade seven choir), was a story of two bumbling members of the French police whose intension was to avoid as much hard work as possible but prey on the weak and helpless while taking bribes and generally bludging off.

Now tell me this tune doesn’t more closely resemble humorous, blundering incompetency rather than bravery and feats of daring.

Playing this song when the Crows win a match seems to be rubbing it in the face of the club they beat, with a musical “Ho ho ho – we didn’t even know the rules and we still beat you!”

Okay, so I can hear what you’re saying, “Jeez… don’t write new songs, don’t copy old songs… this guy is hard to please!”

Well, yes. I am hard to please. But really only if you keep writing crappy footy songs.

He wanted a score review! 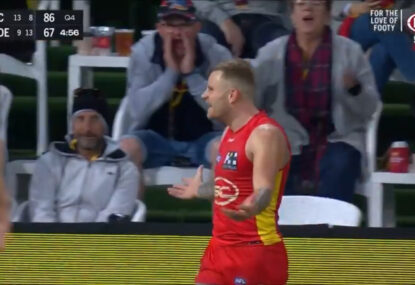 "I try and get Count Dracula off any charges, but that is well worth a look at." 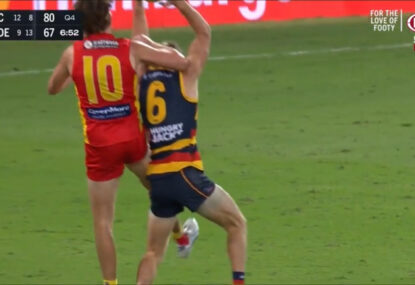 It took the umpires a minute - and the stretcher having crossed the field - to finally halt play. 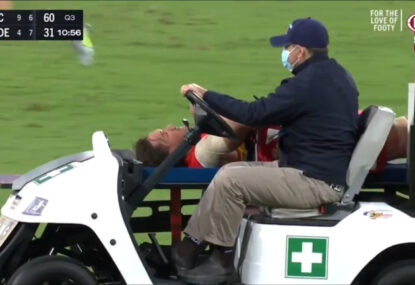