Australian coach Tim Sheens is leaving no stone unturned ahead of the rugby league World Cup with a surprisingly powerful side named to represent the Prime Minister’s XIII later this month.

Normally a squad containing a mish-mash of youngsters, established stars and veteran journeymen, the PM’s XIII to take on Papua New Guinea in Kokopo on September 29 contains no less than nine players with Test experience in the starting line-up.

With Sheens to take a squad of 24 to the UK and Ireland in a bid to reclaim the World Cup, a number of players will be out to press their claims.

No position is more open than centre, with incumbent Justin Hodges sidelined with a ruptured Achilles.

Veteran Brent Tate and Canterbury’s Josh Morris were both named in the PM’s side to be coached by Laurie Daley, while the likes of Sydney Roosters flyer Michael Jennings and Newcastle bolter Dane Gagai would also be considered candidates.

Jennings and Gagai were not considered for selection in the team to play in PNG, with their NRL sides still involved in the finals series.

“There’s no doubt, the two boys playing in that game (Tate and Morris) will be considered, they’ve both played for me before in the Australian side,” Sheens told AAP.

“It’s also a game that everybody needs given it’s still quite a few weeks until we play the Test against England.

“It’s ideally placed to give them a little bit more match conditioning in between their last game and the first match at the World Cup.”

Parramatta’s Jarryd Hayne was named at fullback but shapes as a wing option for the Kangaroos, while Canterbury five-eighth Josh Reynolds will be given a chance to push for the utility role in the squad given the absence of Kurt Gidley with a foot injury.

“Those guys are all in consideration for the Kangaroos squad, some more than others obviously,” Sheens said.

“But given there’s a lot of footy to still be played, injuries and other issues can still be a worry for us by the end of the finals.”

Along with Tate, James Tamou and Gavin Cooper being named to play in PNG, North Queensland co-captains and Kangaroos certainties Johnathan Thurston and Matt Scott were also added to the Kangaroos train-on squad following the Cowboys’ controversial finals exit.

Round 22 is done - it's time to rank the whole load of them. 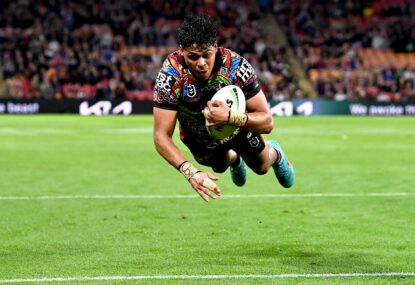 A few teams are switching to finals mode, while NRL Round 22 saw stragglers finally have the curtain close on their finals hopes. Here’s…