Welcome to the business end of the footy theme songs chart! The first tune with the dubious honour of featuring in the top 10 is another in the “why do I like it?” vein, as discussed at length yesterday.

On first listen, the tackiness of ‘We are the Suns of the Gold Coast sky’ is hard to stomach – much like the unveiling of their jumpers.

After a few listens, it quickly graduates from hard to stomach  to entertainingly bad, leaving their jumpers behind at this point. Once you’re in that dangerous territory of entertainingly bad, you’ve automatically jumped above the putrid (#15-18 in the chart) and the dull (#12-14).

As with the Freo one, it is hard to go into detail about exactly what it is that I enjoy about it.

And I would like to note that the only reason this pips Freo’s song is because this at least feels like an actual, though short, song. ‘Way to Go’ feels a bit like a couple of sections stuck together, which is a real shame.

History time: around the same time as his failed Freo theme song bid, Rosco Elliott wrote up this essentially traditional song for the Gold Coast.

It follows the verse/trumpet section/verse set-up of all the VFL classics, and sonically it suffers only from the synthetic-vibe of its modern production. I think this is what must bug people most about the song, as this is what grates on the ears on the first listen.

In defence, I reckon if you shipped the tune back to 1972 and had it recorded with the bulk of the rest of them, there’s not a huge difference. My hat goes off to Mr. Elliott for managing this.

Mr. Elliott, by the way, is a hard man to track down information on.

He has a website (at least, I think it’s his) that doesn’t appear to be working. His Twitter bio defines him as “Working to promote AFL/Aussie Rules as Australia’s biggest + best commodity.” (And nobody could argue with that noble pursuit.)

It also mentions he has a new album out soon. I wonder if “…Gold Coast Sky” or “Mighty Freo” will make the cut…

Back to the task at hand. The lyrics are just as good or bad as any other in the league, although I don’t love the “red gold and blue” line in the song (or the colour scheme for that matter). And it’s lovely of them to mention that they’re playing to win the flag for you. Very sweet of them.

So I don’t love it, I don’t hate it, but it does make me laugh. I will be the first to say how cheesy it is (highly, in case you were wondering), but in some good ways.

If I was to, say, pick an AFL song as the soundtrack to a Rocky-esque video training montage, this one would probably be it. It’s even almost spot on the same tempo as ‘No Easy Way Out’ from Rocky IV.

Actually, I could probably leave this article at that.

That scrapes it into the top 10.

Broadcasting great Bruce McAvaney has been inducted into the Logies Hall of Fame, in a fitting tribute to an icon of Australian sport. McAvaney,… 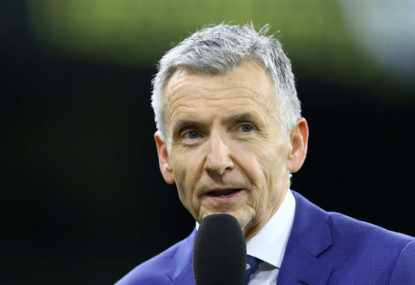