From USA Today to The Goulburn Post, the news hit widely as if Michael Jordan had announced a comeback: Andrew Bogut feels 100%.

It’s good to know, but not exactly groundbreaking.

The NBA offseason is known to produce these sorts of juiceless items, which handily fill sports pages when the box scores won’t.

For Golden State Warriors fans and Aussie sports nuts who have long followed Bogut however, the centre’s health is meaningful, mainly because he’s rarely 100% fit.

This is a guy who’s battled the full gamut of injuries, from a sore back to crook knees to a horribly dislocated elbow. That last one’s not a YouTube highlight I recommend after dinner.

Lately, it’s mostly been his ankle, which was surgically repaired last year.

All this is nothing new for big men, who have struggled with nasty niggles since before Converse began turning canvas into sneakers.

So after missing 50 of 82 games last season, and a majority of the past two seasons, Bogut says he’s feeling the best he has in a while.

“It was hell for me the last 12 months, to be honest,” he said last week. “I’m just happy that that light is getting brighter and brighter for me in the tunnel and it’s at the stage now where I feel like I’m driving out of that tunnel.”

Presumably much of the light is the glare from those impossibly yellow t-shirts Warriors fans wear at Oracle Arena. They’d set an Alaskan airstrip aglow in the dead of night.

Or maybe it’s just the idea of playing in front of Warriors super-fan Jessica Alba that’s boosting his spirits.

Either way, Bogut’s physical status and overall mood will be key for the Warriors in the upcoming NBA season.

This was a team that surprised a few people during their recent playoff run and showed they would a force to be reckoned with in the future.

Bogut is the anchor.

He ably manned the middle in the playoffs, blocking shots, ripping down rebounds and dissecting defences with his nifty passing. Until the Warriors encountered the superb and efficient San Antonio Spurs, they were rocketing toward the finals.

In a first round game that knocked off the formidable Denver Nuggets, Bogut supplied 21 rebounds, four blocks and three assists.

Now he’s in the final year of a five-year contract worth $65 million, which is possibly why he sounds confident about his health and is touting himself as being among the best centres in the NBA.

He doesn’t really have anything to prove to the basketball world after excelling at college, representing his country and posting solid pro numbers.

This is partly about business. He’s only 28, so you can understand the earnestness. With plenty of basketball still left in the legs, it’s surely on his mind to play the bulk of the next season and win another contract.

Fortunately the Warriors give him a good chance to succeed.

Golden State finished 47-35 to earn the Western Conference’s sixth seed last season and will figure to be in the playoff mix again next June.

Their consistency will be an advantage because it’s a much harder thing to come by in today’s hyperactive NBA rostering. Blink on a fast break and you might forget who you’re cheering for.

Stephen Curry, Klay Thompson, Harrison Barnes and David Lee are all returning for the Warriors.

The club also added the athletic and powerful Andre Iguodala, who can start at a couple of positions.

This team, led by superstar scorer Curry, is in championship contention. Hopefully Bogut is therefore spurred on to beat the aches and pains and reach great heights.

And if not, maybe we can call on Ms. Alba to trade in her yellow shirt for a green and gold one.

Golden State Warriors remain alive in the NBA Finals after a late scoring burst by Steph Curry and Klay Thompson powered the defending champions to a courageous win over the Toronto Raptors. 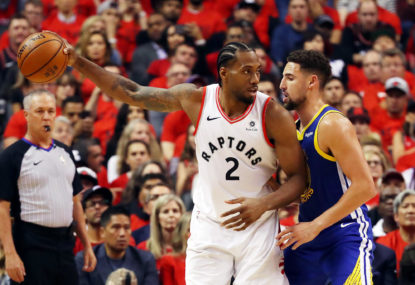