Just days out from their first sudden-death game of 2013, South Sydney have been forced to defend themselves against accusations of dirty play in a bid to end 42 years of premiership futility.

Having enjoyed a week out of the limelight as they took a low key approach to Friday night’s NRL preliminary final against Manly, the spotlight was back on the Rabbitohs pack on Monday – and in particular the tactics employed by forward enforcers Jeff Lima and Sam Burgess.

The pair were suspended for their involvement in unsavoury on-field incidents in the lead-up to the finals, with speculation the Sea Eagles will be out for retribution for Lima’s leg twist on Anthony Watmough in the last meeting between the two sides.

Watmough came into the round 23 game off the back of a knee injury, and was subjected to an ugly leg twist in the opening exchanges by Lima, who capped a one-game ban for the incident.

Watmough missed the ensuing two matches as his knee injury flared – and while the pair will no doubt meet again on Friday night – veteran Roy Asotasi said fellow prop Lima should not change his style game against the Sea Eagles.

But Asotasi was adamant the Rabbitohs were not a dirty team.

“We can’t play dirty and that’s not how we’ve played our game all year,” Asotasi said.

“We’ve played our game pretty clean you’d like to think.

“Jeff won’t be changing the way he plays. He had a great game against Melbourne last game and that’s all we expect from him, to go out there and do what he needs to do.

“I don’t think he is a dirty player.”

The round 23 encounter between the two sides also enjoyed a spiteful build-up, after Rabbitohs superstar Greg Inglis was dumped on his head three times when they clashed at Brookvale Oval in round seven.

Asotasi expected a tough, yet above board, encounter on Friday.

“You go out there and try and bash each other as much as we can,’ Asotasi said.

“It’s a contact sport, you’re not going to expect anything soft, especially in the finals series.”

Luke Burgess was also forced to launch an impassioned defence of brother Sam, who was banned late in the season for grabbing at the crotch of Melbourne’s Will Chambers.

Sam Burgess admitted on his return after the Chambers suspension that he had been getting frustrated and had to eradicate some of the silly stuff from his game, but his older sibling played down the furore.

“I don’t know what all the niggle talk’s about really,” Luke Burgess said.

“Sam just plays the game hard, he’s a real competitor … I don’t necessarily see him being a niggler.”

Like Asotasi, Burgess played down the prospect of revenge being on the minds of either set of players at ANZ Stadium.

“I honestly don’t think it does – the game’s past that now,” Burgess said.

“Players these days, especially this time of year, it’s all about performing, it’s not about getting one over on someone that you mighty have had a bit of a niggle with in the past.” 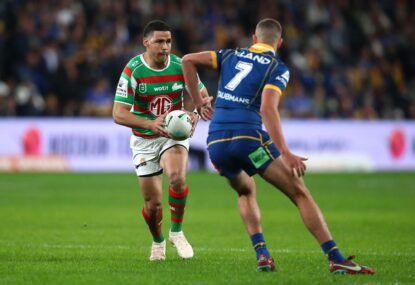 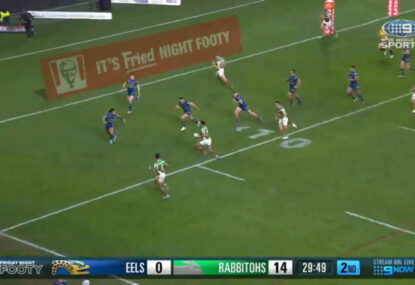