Congratulations, New South Wales! You seem to have snuck in and pinched the last two spots, although, yes, the Swans song has changed precious little since moving from South Melbourne. Still, you should all be proud.

This song radiates brilliance. It’s what any sporting club would wish for. What perhaps explains why this is a masterpiece of the genre, is that it was written specifically for sport.

The original song was called ‘Victory march’ and composed for the University of Notre Dame football team and is probably, if there was any way of proving this sort of things, the most famous song written for a sports team in the world.

Some of this publicity should be credited to the 1940 movie ‘Knute Rockne, all American’ which brought the song to the attention of a global audience.

Sometime during the 50s, Larry Spokes, a recently retired South Melbourne player, used the tune to write his old club a new song. It was an instant success, and lasted until the club moved to Sydney in the 80s.

After the move they took up a re-written version of ‘Up there Cazaly’ titled ‘Up there for Sydney’. It’s awful. If you’ve forgotten it, don’t look it up.

Thankfully they returned to the South Melbourne song, simply swapping ‘South’ for ‘Swans’ in one line.

It’s engaging and exciting and has some of the best lines of all the clubs we’ve looked at over the last two weeks.

Musically it just roars along, and even has a key change! Not the tacky, run-out-of-ideas musical bowel-emptying key changes of X-Factor/The Voice etc., but a genuine song-lifting, team-lifting piece of sonic exhilaration.

With nothing major to complain about, why do the Swans place second, not first? Well, in such a close race between a top three, you’ve got to pick between them somehow.

A coin toss would have been unfair (plus, they only have two sides [well, yes, technically they have three…]), so I needed to find something about the last three songs to set them apart from each other.

If they are all equals when compared to one another intellectually, then it must be something emotional, something not to be over-analysed, but simply one small aspect that either disappoints or excites in some way.

I picked the Sydney song over the Tigers’ based partly on the fact the Swans’ tune has passed the ultimate test of the sporting anthem – I found myself bitterly humming it on the sad walk home after seeing the Swans beat my team in the saddest moment of my football-watching life.

But the song deserved to get hummed, such is its strength.

So why not first then? Well, it’s an almost arbitrary reason – but a reason had to be made: it’s not all that original, compared with most of the other songs.

I know what you’re saying – if originality is the key factor, then give it to West Coast.

Well, no, it’s got to be a great song, and ‘The red and white’ is light-years away from the songs at the bottom of this list.

I also understand we’re comparing songs that have almost all just pinched catchy tunes from various sources and spruced up with some new lyrics, but my issue was the slightest of disappointments of knowing the Swans’ tune changed only a few of the lyrics from ‘Victory march’.

Only the lines “Honour the name by day and by night / Lift that noble banner high” are original to the South/Sydney version (apart from changing out the instances where ‘Notre Dame’ appears), all the rest are exactly as you’ll hear Notre Dame sing today.

Maybe if the line “Shake down the thunder from the sky” belonged to Larry Stokes I would have backed that right to the top (is there a better single line than that in the AFL, anyone?)

So this does place it second to St Kilda, only for lyrical laziness.

Consider them both first, or choose your own if you like. However, I had to put one up today and one up tomorrow and after writing up both articles, this is the one you’re getting now.

Think of it like a Brownlow tie, where ‘The red and white’ was suspended for a game at the start of the season.

But let’s not dwell on this as a sour note – this thing is brilliant, and it’s what every club should be aiming for. We had to pick first and second somehow, and it’s exciting to know how close the top tunes all became.

It shows that not only is AFL the greatest sporting code in Australia, but is represented by some of the most impressive club songs going around – a truly impressive standard of excellence. 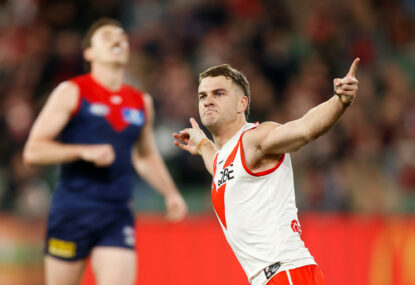