Souths' collapse under pressure of the past

South Sydney coach Michael Maguire often insisted this year that the Rabbitohs NRL premiership drought did not weigh around the necks of his players, but with each passing year of near misses the expectation only grows.

The Rabbitohs bowed out at the penultimate hurdle for the second straight year on Friday night with a 30-20 preliminary final loss to Manly at ANZ Stadium – the barren stretch now 42 years and counting since the club’s record 20th and last title in 1971.

Throughout a campaign during which the Rabbitohs were regularly reminded that they could be the ones to end the drought, Maguire would defend his troops by saying they could not be held accountable for past failures.

This was a group for now he would say, not about the four decades that passed previously.

But as a team that now challenges regularly for a title, expectation comes with the territory for Maguire and the Bunnies.

After all, how many times during the four seasons which preceded Maguire’s arrival – when Souths finished 14th, 10th, ninth and 10th respectively – was the issue of South Sydney’s long wait for a premiership raised?

That title is now within touching distance for the Bunnies, but Maguire knows from what he saw on Friday night, there is still a way to go on the journey.

“… we’ll learn a lot. I’ve got a tough footy team in there,” Maguire said.

“To have the fans, the people that keep turning up for us, we would have loved to have given them the joy of next week.

“We’re getting stronger and stronger as club and we’ve got to keep working hard at that.”

With no significant recruits for next season, that improvement will have to come from within.

Maguire said after the game on Friday night that the occasion didn’t get the better of his side, but it was a match that was the Rabbitohs’ for the taking when they had Manly on their knees at 14-0 after 12 minutes.

Souths failed to step on the throat of their opposition, two Issac Luke knock-ons and a forward pass – two of those errors coming within ten metres of the Manly line – indicative of wasted chances.

Halfback Adam Reynolds was solid without making the impact expected of the NSW No.7 heir apparent, while Greg Inglis was epic in defence yet quiet in attack.

And so the wait goes on.

“We’re a growing team,” a dejected Sam Burgess said after the game.

“Tonight is not what we’re after as a group.” 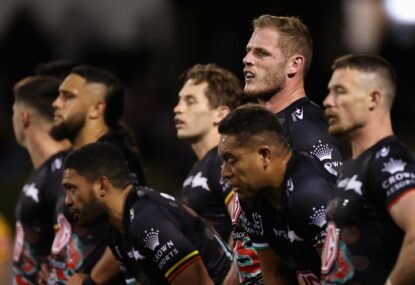 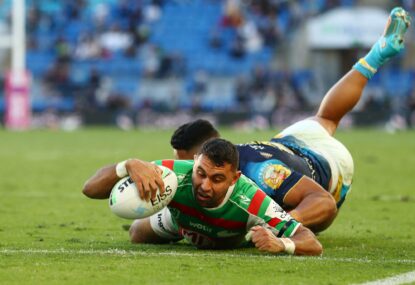 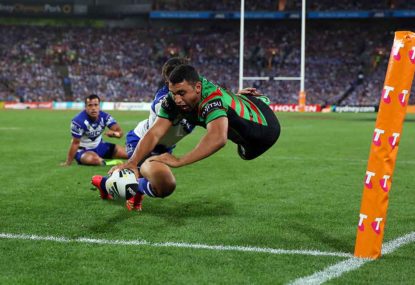