“I think the lightest I played at was something like 110 and I felt like a feather,” the Manly prop recalled.

“It didn’t quite feel right. I do enjoy playing big.”

And big has been the word to sum up Rose’s career at the Sea Eagles, which comes to an end in Sunday’s grand final against the Sydney Roosters before his move south to Melbourne in 2014.

In an age where footballers indulge all manner of holistic and raw food diets in a bid to get every possible edge on the field, Rose has never allowed his girth to become an issue.

“I can’t help myself, I love a good steak,” Rose said, “I probably eat more than the (recommended portion) palm size.”

When he runs out on Sunday the No.17 jersey he has grown to love will again be riding up the generous belly.

It’s all part of what makes George Rose the footballer he is and a player who has made some NRL fans do the unthinkable – support Manly.

There’s likable larikin in Rose, but the man himself says it’s because fans can relate to him.

The difference is he competes at the highest level week after week.

His efforts for the Sea Eagles this season have helped the club out of a hole, after they lost regular props Jason King and Joe Galuvao to long-term injuries.

Rose stepped into the breach and delivered a series of performances that have some Manly fans asking just why they have let him go.

And the secret to being able to battle lean, muscle-clad footballers week-in week out?

“He’s had some big battles with me over the years.

“I think he came to accept as long as he has me doing the right thing on the field, that’s all that matters.

“I’ll sit down and have a good chat to him after this game and come clean on all the lies I’ve told him over the years.”

But maybe one more favour of Singe, like a phone call to Storm coach Craig Bellamy before the start of next year’s pre-season training?

“I’d love it if he did that but I don’t think l’m going to avoid that,” Rose said.

“Once I get down there (to the Storm) it’s going to be unavoidable.

“Who knows, I could end up with a six-pack down there.”

Haumole Olakau’atu stole the show for Manly as Brent Naden was sent off in an eventful start to Brett Kimmorley’s coaching career at the Wests Tigers. 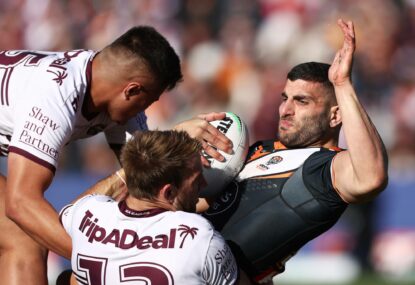 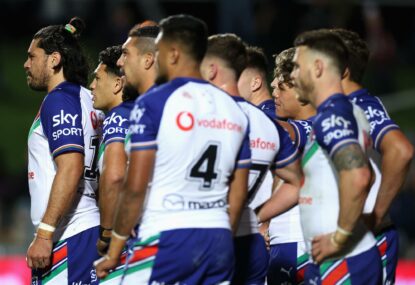