2013 Caulfield Cup: Where have the Kiwis gone?

Saturday’s Caulfield Cup is further proof the race has progressed from a mere lead-up to the Melbourne Cup to become a target race on its own.

While it may not be a Caulfield Cup for the ages, it is a highly competitive race with many winning hopes.

With half the Melbourne Cup field expected to include hit-and-run international visitors, this is a crucial race to determine whether to push on to the race that stops the nation.

However, it is also notable for another reason – the dearth of Kiwi stayers in the field.

This year, there is only one New Zealand-trained galloper in the field – Silent Achiever for Roger James – while Mr O’Ceirin is the only Kiwi-bred to line up.

They have been eclipsed by Irish-bred imports, with five – Glencadam Gold, Kelinni, Moriarty, My Quest For Peace and Julienas – to start. A sixth, Nicky Henderson’s Forgotten Voice, needs a scratching in order to gain a start.

And five years ago, in the 2008 Caulfield Cup won by All The Good, there were three stayers who represented trainers from across the Tasman – Nom du Jeu (2nd), Red Ruler (6th) and Boundless (11th) – while Master O’Reilly (7th), Maldivian (9th), Guillotine (14th) and Fiumicino (17th) were bred in New Zealand.

To be fair, the Kiwis were also supposed to be represented by Sangster (spelled after finishing last in the Turnbull Stakes) and Quintessential (retired after a lacklustre track gallop on Saturday). But still, the fact Kiwi-breds are sparse on the ground is indicative of the shift in recent years towards European imports.

So why have New Zealand stayers fallen out of favour?

For many years, the best source of staying blood for Australians was found in New Zealand, and every trainer who wanted a stayer – from Bart Cummings down – would head to the Karaka yearling sales in earnest every year.

They would also examine hours and hours of race footage, looking for the next superstar.

But the New Zealand breeding industry in recent years has looked to Asia to survive and prosper, with big money from Hong Kong and Singapore usurping offers from Australia.

In addition, the quality of racing in New Zealand, particularly amongst the older brigade, seems to have dropped significantly, perhaps as a result of prizemoney in New Zealand dropping markedly.

After their three year old season, the best gallopers either cross the Tasman or are sold to Hong Kong.

The Spring Classic, formerly the Kelt Capital Stakes, was one such example of the poor depth in New Zealand recently.

A race which had been won by the likes of Shez Sinsational, Jimmy Choux, Wall Street, Princess Coup and Xcellent in the last decade alone looked rather weak this year in comparison.

The race was won by Ransomed, a horse who had never looked like measuring up to weight for age in the past. In fact, the only horses who looked genuine weight for age contenders were Nashville, who beat Ocean Park in the Haunui Farm Classic earlier this year, and Survived, who started favourite in the Queensland Derby won by Hawkspur.

For a race with such a top honour roll, it was further proof that New Zealand is perhaps no longer where it used to be on the pecking order.

In the end, the move away from Kiwi stayers can perhaps be attributed to a New Zealander – Sydney’s champion trainer Chris Waller.

His move to buy cheap European gallopers to conquer Sydney’s staying races was a remarkable success, with almost every horse purchased from Europe winning at least one race in Australia.

While trainers like David Hayes and Lee Freedman had been bringing out top-notch imports for years, it was Waller who proved it was possible to buy winners with a limited budget.

Therefore, it may be ironic that of Waller’s four runners in the Caulfield Cup, his two Australian breds (Hawkspur and Royal Descent) head the market while his two imports (Moriarty and Kelinni) are big odds.

For the Kiwis, though, it may be a case of quality as opposed to quantity in this year’s Caulfield Cup. Silent Achiever’s form has been better than it looks on paper and she looks a top chance of giving New Zealand their first Caulfield Cup since 2001. 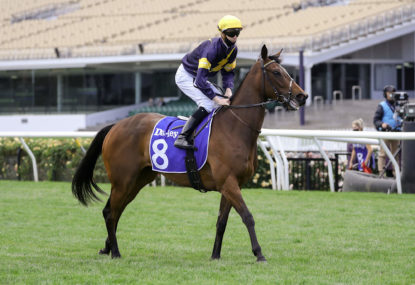 It started as 124 first acceptances, it now lays at 35. With the capacity field size being 24, 11 unlucky horses will drop out of the contention for the 2021 Melbourne Cup on Saturday evening. This year’s race shapes up to be a fascinating edition of the race that stops the nation with dominate Caufield […]