Video referee for the A-League? No thanks!

Is it time the A-League introduced a video referee following howlers in the Adelaide United versus Melbourne Victory match?

That was the question bandied about by Fox Sports after an abysmal display of refereeing in the first 45 minutes of Friday night’s clash.

To which my reply stands at a firm and comfortable no thanks!

With it, the result would most likely have fallen the way of Melbourne Victory, but I honestly believe more harm than good would come of it.

During the midway point of the 2013 NRL season, the complete opposite was asked by TripleM’s radio show The Offload.

They wanted to know if the excessive use of the video ref was potentially damaging the product of the game.

I was lucky enough to get on the line that day and offered my two cents. It went something along the lines of this.

“I support both the Brisbane Broncos and Brisbane Roar, two great sports with great appeal, but a significant difference in the match day experience to which the use of the video ref damages the atmosphere generated by the fans of rugby league.”

As I was on a league show I stuck to using the term football to please the panel and listeners.

“At a soccer match, when a goal is scored you can enjoy the moment for what it is. A well worked period of play in which your team is rewarded with the scoring of a goal.

“You can lose yourself in the emotion of it all and not have the worry of going up stairs to check the replay to see if it was a goal.

“In footy I am constantly bombarded by the KFC logo doing its rotation to spin up the words of ‘Try’ or ‘No Try.’ And even when I’m convinced its a try, I’m left gobsmacked as to who in the world it wasn’t awarded.

So if former rugby league professionals such as Gorden Tallis and Ryan Girdler are concerned as to the extensive air time video refs with their KFC replays are afforded then why even think about bringing it into our wonderful sport?

Is it to prevent horrendous decisions such as the ones we saw on Friday night?

• To support the team I love.
• To watch a quality match.
• To experience a vibrant atmosphere.

I have no problem with the first reason and never will but when the flow of a match is constantly interrupted to check a goal, penalty, offside or even a yellow card, then points two and three can be pretty much thrown out the window.

Now obviously if any rule like this was to be added it would have to gain the approval of the governing body FIFA.

However, when you have A-League coaches like Ernie Merrick saying “often games are won by one goal, so why wouldn’t you use technology that’s available” and “every league of the highest professional level should use goal-line technology. Even for offsides they should have replays.”

You have to ask yourself why?

Why take away the emotion, suspense and drama that has made the game what it is?

Thanks but no thanks! I’d rather leave it to the balance of power in that everything eventually evens out. 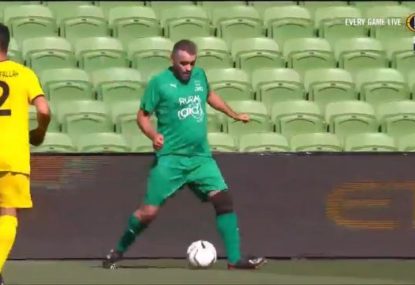 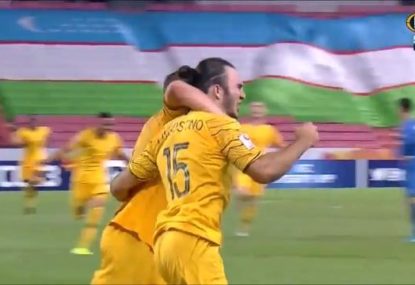 The Olyroos have qualified for the Tokyo Olympics after a 1-0 win over 10-man Uzbekistan in the third-place playoff at the AFC Under-23 championships.