Eight on-field trends to watch for in 2014

The performances of Sydney in 2005, Hawthorn in 2008 and Collingwood in 2010 show that innovative game plans can help a team win a premiership.

The Dockers moved from seventh place in 2012 to a grand final in 2013, largely due to their new game plan. Strategies matter. Here are eight strategies, started in recent years, that will rise to prominence in 2014.

As tackling pressure gets hotter all over the ground, there’ll be less time to handball. By the end of the season, some players, particularly in the forward half, will be using ground level knock-ons so frequently and creatively that analysts will be arguing that game-day stats need to include ground level knock-ons.

2. The centre half forward who leads wide.

So the main ingredient now for a centre half forward is constant movement, continuously providing a long range target on the wing or forward flank on both sides of the ground.

Goodes and Podsiadly may no longer be able to play this role. Jonathan Brown certainly can’t, and in another year or two, even Nick Riewoldt and Pavlich will be unable to play the modern Centre Half Forward role.

‘Numbers behind the ball’ has been the catch cry of recent years, in an attempt to cluster the opposition’s forward line. With the midfielders dropping back into defence, they still need someone to kick to.

This has necessitated forwards working up the ground and, following a successful rebound, sprinting back into the open forward line. Of course forwards also need to chase and tackle more than in the past. With all this running, forwards nowadays need to be fitter than ever before.

Minsen, Grundy, Maric, Naitanui and Mumford are quick to follow up their work in the air with second efforts at ground level, and this will give them the edge over traditional lazier rucks like Bellchambers, Cox and Trent West.

Sandilands may remain an exception who doesn’t get dirty knees, purely because his work in the air is so dominant.

5. Rise of the rebounders.

Defenders nowadays must have creative foot skills to set up attacks. Gone are the days when unskilled desperados could get a game in the backline.

Veterans like Nick Maxwell and Michael Firrito may well be the last of this great tradition of battlers.

This will have implications for coaching too, because it was the ‘battling back pocket’ tradition that bred many of the great coaches of modern times: Malthouse, Sheedy, Pagan, Worsfold, Laidley and Bomber Thompson.

6. Rise of the defensive marks.

Not so long ago, defensive talls like Prestigiacomo, Gibson and Merritt were being lauded for their defensive spoils.

But it was Geelong’s Taylor, Scarlett and Lonergan – with their defensive marking – who were winning the premierships. The growing value of rebounding as a source of goals meant it was worth the risk for defenders to attempt to mark instead of spoil.

This trend was not lost on Longmire and Clarkson. When Richards added more defensive marking to his game in 2012, the Swans won a premiership and when the king of defensive marking, Lake, was recruited to the Hawks in 2013, he won the Norm Smith medal.

In 2014, tall defenders who don’t take marks will be spoiling down the bottom of the ladder.

In congested games, a particular kind of rebounding capacity will be required. We’ll call this ‘burst capacity’. Most teams, when the opposition gets a run-on, will send their forwards into the back half.

The teams that lack burst capacity will then simply be stuck defending for long periods, and not be able to get the ball back past the centre line.

However the teams that do have burst capacity will still be able to score by bursting out of the congested back half. This requires running the ball out of congestion in waves (a strategy that can’t be sustained for four quarters) or pin-pointing high-risk short passes across the ground that find a player in the clear. Both involve a high degree of risk and skill – ‘taking the game on’.

Hawthorn had burst capacity through a glut of highly skilled foot passers working from the half back line, and Geelong wasn’t far behind them.

The Swans relied heavily on Malceski and McVeigh for creative foot-passing out of congestion, and when these two were covered, they resorted to Dockers-style footy, stopping other teams’ burst capacity and slugging out a low-scoring game.

There’ll be plenty of experimenting with swingmen in the first half of the season. Poor tactics in modern footy – even for five minutes – can cost a side dearly, and the more players a coach has that can slot into multiple positions, the more flexibility he can have with his tactics.

On the other hand, the increasing speed of the game means that players are playing more and more on instinct, and instinctive teamwork is easier when player combinations in defence, the midfield and attack are more settled.

Coaches will want to use the first half of the season to find out which players are their best swingmen, and to get backmen and forwards comfortable with the particular players who will swing down there from time to time.

In the second half of the season, those teams with finals aspirations will be looking to have more settled combinations in defence, the midfield and attack, and will therefore use a smaller number of swingmen.

If there’s a broader trend behind the above trends, it is that every player is becoming an all-rounder. It’s no longer sufficient for the rucks just to compete in aerial contests, for the forwards just to attack or for the defenders just to defend.

Most of the above trends were actually iinitiated by Ross Lyon and Bomber Thompson but then recently taken to new levels by Malthouse, Clarkson and Longmire.

Collingwood veteran Travis Varcoe’s AFL pre-season program has suffered a major setback, with the speedy midfielder to have shoulder surgery. The 31-year-old was hurt during a pre-season training drill on Monday and must undergo a shoulder reconstruction. “While Trav will miss some early rounds of the season, we’ll have a better idea of his return […] 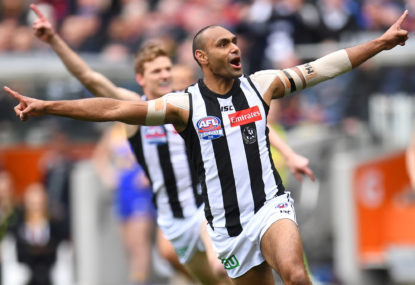 Collingwood veteran Dayne Beams has taken an indefinite break from the AFL to concentrate on his mental health. 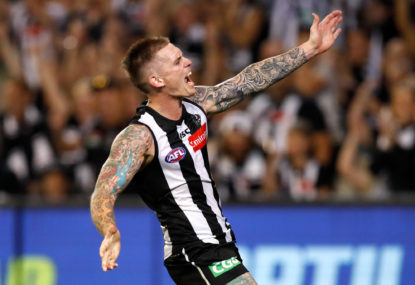 Following a disappointing finals series after a top-four finish in 2009, Collingwood entered the 2010 decade as one of the teams to beat, boasting high-profile recruits Darren Jolly and Luke Ball.

One of the biggest free agent sagas of 2020 could be completed well ahead of schedule, with multiple outlets reporting on Tuesday that Collingwood had offered star ruckman Brodie Grundy a monster seven-year deal.

We’ve got plenty to discuss on The Roar’s Game of Codes podcast.