Swans Nation, I promise, the sky isn’t falling – although it seemed like it was on Saturday at about quarter time, and again a handful of hours later.

Clearly, the GWS Giants were the best team on Spotless Stadium, and deserve their first triumph in the sixth renewal of the Sydney rivalry.

It is a rivalry which, up until probably about seven-thirty on Saturday night, had been mostly a manufactured one, without the real angst and hatred you see in games between Richmond and Essendon or Adelaide and Port Adelaide.

The Giants famous win, delivered on the back of six straight fourth quarter goals, has given the twice-annual contest between the established Swans and the fledgling western Sydney franchise, horribly named ‘The Battle of the Bridge’, a signature moment.

It is one that will be remembered, with varying degrees of fondness (depending, of course, on whether you were wearing red and white (as I did) or orange on Saturday evening) for some time to come.

The best win in the history of the Giants comes on the first game of their third season, and it showed that their off-season moves have delivered the much needed veteran support that the young, developing list has needed.

Amongst others, notably Shane Mumford in the ruck, Heath Shaw in the midfield seemed to give their junior comrades some direction. Boy, did it work well.

For me, the most disappointing aspect wasn’t that the Swans lost. It’s football. As in all sport, losses happen.

The Swans have had their fair share of tough ones over the years, and they all leave a certain mark on you.

However, there have been very few like the one we witnessed tonight, when – particularly in the fourth quarter – the Swans seemed uninterested, undisciplined and largely without spirit.

That is an alarming thing to see.

The result, and the way GWS rolled over the Swans, kicking six unanswered in the final term, could be looked at in the following manner: Sydney didn’t do the little things right, the things that they’ve done right again and again, en route to premiership glory.

They fell off tackles, lacked vision down and across the field, at times seemed completely unable to bring the football out of their defensive arc, and, worst of all, apparently un-learned how to kick straight in front of goals.

It was a maddening thing to watch because you know the Swans can be great.

You know they’re warriors who, on pretty much any other week can be relied upon for that extra effort, that little moment at the bottom of a pack in a struggle for the ball that allows them to get ahead of their opposition.

Not tonight. Nowhere to be seen, either, was the ferocious pressure that has stunned opposing teams and been lauded by the media for so long.

Tonight, it was the Swans smashed and smashed again in the last quarter, something that they’ve done to other teams for years.

It was hard to watch, that one-way stream of traffic, though in the midst of the GWS surge, there were chances to steady the ship.

Gary Rohan missed a shot midway through the final quarter, clanging the wood work, and from that blow, the Swans never seemed able to recover.

It was over, the Giants racing to a thirty-two point win. A win by a better team, well deserved. It hurts to say it, but it’s the truth.

Yet, one game a season does not make. Things happen in the first round that you don’t expect. Granted, this was one from so far left of field that it was extraordinary both to Swans and Giants fans.

The fact, though, remains: the first week of the season is not likely to be a barometer of how a team is going.

A win, that’s great. A loss…well, you can work on things and get better.

The interesting outpouring on social media from the Swans faithful (some who are apparently not so faithful, as they want to hand in memberships and sell their jerseys on eBay for $1) has been generally along two tracks:

a) The Swans played badly, were undisciplined and cocky
Now, the former is a true statement, at least to a degree.

The lack of discipline was there, alongside some questionable skills, and perhaps there was some cockiness there, too.

Not being inside the rooms, none of us will know for sure, but the way the press narrative has been in this city over the summer perhaps it was thought by some players that all they needed to do was jog onto the field, kick the footy to #23 as often as possible and walk away with a 1-0 record to start the season.

Sometimes, it’s hard not to read your own press clippings.

If there is a time for a wake-up call, it is at the start of the season. Doubtless, the players will be disgusted with their efforts, and with two weeks exactly before their second game (against Collingwood at ANZ Stadium) there is time for change.

And there is time to realise that it won’t be smooth sailing because Buddy Franklin’s stalking the forward line.

It’s heads down, butts up time from now until the next game against the 0-1 Pies. As bad as the loss was, there is time to correct it. It’s a long season.

The Swans can – and likely will – bounce back, and this loss is likely to become a constant reminder of what getting away from the ethos of Bloods football can do.

b) The Buddy Franklin trade is a disaster – trade him and get Jesse White back
As I said above, one game – especially not in Round 1 – should not be used to decide whether an acquisition of a player or coach is a good thing or a bad thing.

Wait eight or ten weeks, or even a season, and then make up your mind. Sure, the high-profile recruit wasn’t good, but then again, neither was most of the rest of the team.

It is downright ridiculous to claim that one of the most dominant players in recent AFL history is no good based off of one game, his first with a new club, and one that was affected by a weather delay.

Even the best players have bad days.

Yes, there were times when Franklin looked at sea, but it will take some time for him to get used to the way things are done at his new club. At other times, like his goal from outside 50m, he looked like the Buddy of old.

There were flashes and glimpses, and you would imagine those become more prevalent as the season progresses.

A parting message to my fellow Swans fans: yeah, this one hurts.

It hurts a lot to be beaten so soundly and it hurts even more to see our boys lacking application and their usual manic pressure, but there is a long season ahead of us, and plenty of time to correct what mistakes were identified tonight and still challenge for a flag.

The list the Swans have is very capable of winning a premiership.

Who knows? The bitter GWS loss might be just what the doctor ordered.

I look forward to our next meeting with the Giants, this one on our home turf. Hopefully, it will be a different result and the performance of a far more committed team.

GWS coach Leon Cameron has revealed that Toby Greene made an emotional apology to the player group in the lead-up to Friday night’s semi-final loss to Geelong.

Third-quarter blitz sees Cats past Giants and into prelim

A run of five unanswered goals in the third quarter has seen Geelong run away from Greater Western Sydney and book their spot in the preliminary finals with a 35-point win. 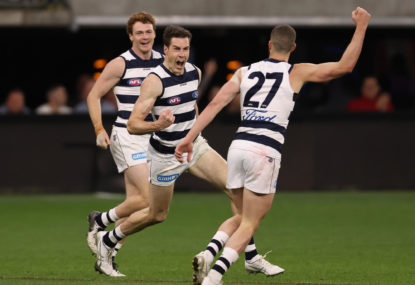 Third-quarter blitz sees Cats past Giants and into prelim