Australia and France first clashed in 1928. Since then the two countries have played 42 Tests with Australia winning 25 times and France 17 times, while two matches have been drawn.

Here are five of the best matches between the two sides, have there been any other encounters worthy of inclusion?

The 1947-48 Wallabies won 35 out of 41 matches during their European tour. They remain the only Australian team not to concede a try against the home unions, earning the nickname, “cleanskins”.

The side was captained by 21-year-old Trevor Allen – the youngest player in the team – after Bill McLean tragically broke his leg in the sixth game of the tour. Allen became an inspiration figure in Australian rugby, but he was overshadowed in this game by French captain Guy Basquet.

France scored all their points in the first 40 minutes as they beat Australia for the first time. Basquet captained France in 24 of his 33 Tests matches and led them to their first ever wins against England and Wales. He later became a national manager, selector and administrator.

This match was so violent that Australian captain John Thornett threatened to take his team off the field. Thornett was left with a two-inch wound on his head after being head-butted in the scrum. Alan Cardy suffered brief memory loss after being stiff-armed.

Australia started strongly and led 5-0, blowing two other chances to score tries. Halfback Lilian Camberabero struck back with a try in the first-half, before the combination of French violence and Guy Camberabero’s kicking won over.

Guy Camberabero scored 110 points in 14 Tests. He scored 27 points against Italy in 1967 which was a French record until his son Didier passed it with 30 points against Zimbabwe in the 1987 World Cup.

In the 1999 World Cup final, won 35-12 by Australia, John Eales threatened to take the Wallabies off the field for foul play. In that match Matthew Burke scored 25 points, a record in a World Cup final. The record for most points in Australia versus France internationals is held by James O’Connor who scored 29 in 2010.

Debutant Russell Fairfax – later a league international – said, “It wasn’t a rugby match. It was a fight interrupted by rugby”.

Footage from the match shows French players grabbing the shoulders of their props and flailing kicks at the Australian players. France roared ahead 11-0, before Fairfax stiff-armed Jean-Louis Bérot on the chin which led to a fumble and a try for Rex l’Estrange.

Louis Bérot gained revenge on Australia by king-hitting Greg Davis and breaking his noise. However l’Estrange scored a brilliant try from a scrum move and then McGill kicked a 45-metre penalty to push Australia ahead.

Meeting fire with fire, Australia defended stoutly for the last 10 minutes and won for the first time in France.

McGill recalled the after-match function, “The French turned up two hours late and walked in with one arm under their blazers, in single file, singing… we’ve gone yes… Waterloo”.

The first four-point try in a Test was scored in this game by Jean-Claude Skerla. Though the Rugby Club in Pitt Street, Sydney had a framed jersey of All Black John Dougan on its walls with a note claiming that ‘Darcy’ scored the first 4-pointer!

Australia led 9-6 at halftime, but five lead changes in the second half saw scores tied 24-24 with two minutes remaining.

Scottish referee Brain Anderson missed a knock-on by French number eight Laurent Rodriguez and that was bad news for Australia. France scored an epic try which saw 11 players handle the ball and Serge Blanco fly in at the corner.

France was into the World Cup final and Blanco, born in Venezuela, had scored the most famous of his 38 Test tries.

In a brilliant game of rugby Michael Lynagh passed Paul McLean as Australia’s leading point scorer and David Campese broke the world record for most Test tries. Didier Camberabero scored 354 points in 36 Tests and wore a hairpiece for much of his international career.

Australian Rugby Union president Joe French, having watched Test rugby for more than half a century, described this performance as the best he had seen from the Wallabies.

Paul Carozza scored from a high-kick after 26 seconds. Six minutes later Campese crossed-kicked for Paul Cornish. In the 16th minute Tim Gavin rumbled over from a scrum as Australia led 18-0. France reduced the gap to 21-15 by halftime, but Australia on the back of a record 24-point haul from Lynagh won easily.

Blanco scored a stunning try to rival his effort from 1987, but Australia, by virtue of their 21-9 win in the first Test, claimed the three-match series with a game to spare.

During the series Abdelatif Benazzi and Philippe Gallart were sent off for France. Lynagh passed 500 Test points and Campese reached 50 Tests.

Koroibete is a major loss for the tour, but Rennie is confident he can be replaced. 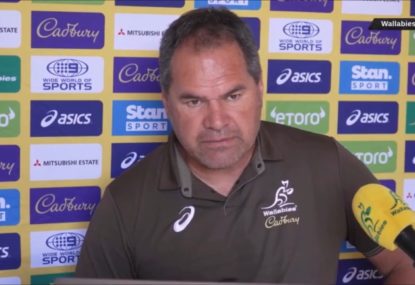