I didn’t even see the first Test, I only saw the replay. There I was, walking off the Eurostar at Gare du Nord, with the morning Parisian sun streaming through it’s majestically stained antique windows.

It was 7.30am, though it felt like mid-afternoon, as crowds gathered in the terminal arriving from all corners of western Europe.

My hotel was three stops away by the metro, but the warm spring weather enticed me to venture on foot, and take in the sights and sounds of one of the world’s most romantic and sports-mad cities.

I had a few hours before kick off was due in Queensland, and didn’t really fancy sitting with a bunch of Kiwis and English to watch the first of their Test matches, so explored the streets.

After checking in I set out to find a cafe, bistro or pub that would be showing the game as I had a few hours before I was to head out to Roland Garros to attend the Women’s French Open Final, the main reason why I had crossed the English Channel.

I strolled the streets of South Pigalle, a new burgeoning district adjacent to the artistic hub of Montmartre, past countless bakeries, delicatessens, and cafes filled with families enjoying their petit dejeuner.

After bypassing my fourth boulangerie, I began to realise this was not the place to hope to catch an international Test match.

There wasn’t a pub in sight, no flags draped over a blackboard reading “free sky sports”, and when I asked a shopkeeper where might be showing the game, he shrugged his shoulders, offered me a taste of his best selling goat’s cheese, and some olives.

Rugby was the last thing on their mind, and who could blame them. I grabbed a copy of L’equipe (the french sports paper), an espresso, and followed the score updates online.

I was somewhat bewildered, as the French are passionate sports fans, and parochial supporters of their beloved le bleu, that not one place had the game showing. Matches in the Top 14 are often sell outs and the atmosphere within their stadiums is one of the best I’ve come across.

However I’ve come to realise if you think one thing of this nationality, they will pose something new and different every time, surprising your stereotypical view of them.

This is no more evident on the rugby field, where we have all heard the question “which French team will turn up?” They are sublime one minute, then bizarrely amateur the next.

As I sat in the stands and experienced one of the fiercest, competitive women’s finals in recent memory, on the other side of the globe it was anything but, as the French went about nonchalantly, mixing the slick offloading flair with the awful, stuttering, fumbling inconsistencies.

It was a demolition job, as the Wallabies opened up their 2014 Test campaign with a seven-try romp of a French side who lacked any of the spark shown in this year’s Six Nations.

The first Test was always going to be a challenge for Philippe Saint Andre and his men, coming off the back of a long and arduous top 14 season whose final was the previous week, meaning some players were unavailable for Test duty.

At fly half, Freddie Michalak, the one player who epitomises the topsy turvy inconsistencies of the French, was playing his first game in a month.

Watching from the stands as the Jonny Wilkinson farewell tour encapsulated the world rugby fraternity had given him too little time to take up the role of on-field director, made all the harder by being low on match fitness.

They looked disjointed, passes not going to who they were meant to and gifting the Aussies try after try.

Let’s not take away the performance of the Wallabies, who although in the middle of their Super season and individually in-form were coming together for the first time since last year’s European tour. They were also without experienced heads Will Genia and incumbent fly half Quade Cooper, and were forced to turn to a 22-year-old to captain the side, after Stephen Moore left the field in the first five minutes.

It could all have gone pear shaped. But the performances of especially Hooper, leading by example, as well as Bernard Foley confidently directing the team around with experience well beyond his years, shows that the future of Australian rugby is in good hands and the depth of our squad is strong, which is crucial going into next year’s World Cup.

The other pleasing part was the impact from the bench. All players contributed to the cause, and with the injuries mounting up and striking at any time, it’s nice to know that players like Kurtley Beale and Pat McCabe can be an influence off the the pine in a number of different positions.

If you’re expecting the same story to unfold in Melbourne tomorrow night, you obviously don’t know the history of French rugby.

It’s the unpredictability of the French that is their most dangerous weapon. Time and time again, they enter tournaments without a glimmer of hope, showing no signs of form. Then, out of the blue there it is, that one outrageously stunning performance that makes us all sit back and say “you got to love the French”.

Perennial World Cup semi finalists, they came within a whisker of beating the All Blacks on home soil in 2011. It shows that this team has the ability to turn things around when they want to.

The signs are already there in selection. In comes Morgan Parra and Remi Tales in the halves, who will provide a more structured kicking game and less off the cuff play. Matheiu Bastareaud in midfield will be a huge threat, not just for his ball carrying ability, but as a decoy to suck in the Australian defenders as well as having a slick pair of hands for a big guy.

At fullback Brice Dulin has been France’s best players all season and will pose another threat on the counter attack.

The most influential inclusion is that of captain Thierry Dusautoir, the one player that has been there on all those occasions when the French turn up. He has a cool head on the field, and is a born leader, instructing and demanding a performance from his teammates with both his actions and words.

His battle with Hooper at the breakdown, the new Wallabies captain, will be crucial in determining which team plays on the front foot, giving their respective set of backs the quality ball they need.

Hooper will lead his team more with actions than words. His outstanding work rate and ability to get his head where no one else can will prove more important than the captaincy decisions he will make, as he will have the help of other senior players around him.

The Wallabies will be wary of the wounded French, given that for the first and last 10 mins of last week’s match they were the better team.

I’ll be home in Sydney for the second Test, so there’s no way I’ll be missing this one.

As I write in that in a small square in South Pigalle in the centre of Paris, a big screen is being set up. Locals are walking around with the tri-colour painted on their faces, ready to support and watch their team.

Like I said. You just never know with the French. 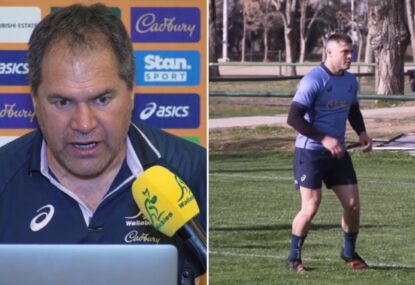