No World Cup, but Steven Pateman is an unknown champion

Ok, it’s a bit less glamorous than Brazil, but on Sunday jockey Steven Pateman completed his seventh jumps win for the season, a significant accomplishment for a first-class Australian sportsman.

Never heard of him? Probably because his win came in the Finns Food Maiden Hurdle, Race 2 at Hamilton, Victoria.

It’s a pity that so few of the hundreds of thousands of people who attend horse races each year have the opportunity to see for themselves the riding skills of one our champion jockeys.

If you look for Pateman at Flemington, you won’t find him. You have to travel to country Victoria or South Australia to see him in full flight, or share the lonely grandstands at Morphettville or Sandown Park. When they do schedule a jumps race it is usually first thing on the card.

His strike rate would be the envy of Damien Oliver or any other jockey who rides on the flat. Last year Pateman was first home in every third outing, and was placed in two out of every three. He was placed in ten of his eleven city starts. So far this year his winning rate is just under 30 per cent.

The best of the flat-race jockeys struggle to reach 17 per cent. Of course as a jumps jockey Pateman has many fewer rides: there are not even a hundred jumping events in close to 20,000 races held in Australia each year. The only other rides available to these heavier jockeys are in a handful of country highweight handicaps.

While Steven Pateman is 67th on the Victorian jockeys’ premiership for the racing year, he’s number one when it comes to jumps. He has been number one nationally in six of the past seven seasons.

Numbers or percentages alone are not the measure of a champion jockey. Pateman shows a winning combination of horsemanship and sportsmanship. He is a vigorous, balanced rider displaying affinity with his horses.

In the Mosstrooper Steeplechase at Bendigo in mid June he was riding an old favourite, ten-year-old Bashboy. Pateman and Bashboy had twice combined to win Victoria’s Grand National Steeple.

At Bendigo, Pateman knew Bashboy well enough to sense something was amiss and eased the horse out of the race despite being odds-on to win. A lesser jockey might have tried to carry on.

Pateman is best known for his association with Black and Bent. Who wouldn’t love Black and Bent, a chunky, muscular horse with a small white star on his forehead, who achieved a pretty good success rate of his own over the fences? 14 wins and five placings from 22 starts.

Pateman rode him in eight of those victories, enthusing about B&B’s personal qualities. “An extremely intelligent horse,” Pateman told the press when Black and Bent retired to the paddock last year. “Behind the gates he used to march around like a heavyweight prize fighter and give you enormous confidence.”

Last week Pateman spoke eloquently at the launch of Mosstrooper’s biography. You have to be a pretty smart horse to get a biography, especially one as good as this. Reading it, you’ll find the differences between then and now are stark.

Mosstrooper belonged to the golden age of Australian racing. He was superbly bred from the lines of Carbine and St Simon but failed to win on the flat. Over the jumps it was a different story. He won three of the big four jumping races of his era during the winter that separated Phar Lap’s 1929 AJC and Victoria Derby wins from triumph in the 1930 Melbourne Cup.

Peter Harris is a retired Sydney journalist, son of a jockey, nephew of Bob Harris who rode Mosstrooper in several of his big races. Peter is even more in love with Mosstrooper – a horse he never saw – than Steven Pateman is with Black and Bent. He’s dedicated years to getting this story right.

It’s the story too of Mosstrooper’s breeder and first owner, Richard Turnbull, and the man who made the horse a superstar, Gus Powell. And of their times.

You can tell whether a book is the work of opportunism or devotion. This one is a beauty. Who cares if jumps racing is no longer big time in Australia? Harris wants you to travel with him on every step of the great horse’s journey. You’ll be pleased to know it has a happy ending.

Mosstrooper was a knockout-handsome horse with charisma, and a spectacular jumper. His exploits made headlines in an era when racing was promoted heavily by the media year-round, thanks in part to the shadowy vested interests of illegal off-course betting.

Fans wrote letters to Mosstrooper as well as to his owner and trainer: piles of mail so big, as they used to say, ‘that even Mosstrooper couldn’t jump over.’ Harris shows us the humanity and love for horses in the jumping game that is so often overlooked by its detractors.

Mosstrooper in his day could become a national steeplechase celebrity and never leave Melbourne, so strong was the interest and competition. Only once in his jumping career of 11 wins did he venture further afield – to Sydney, without success, in the last days of the AJC Hurdle and Steeple at Randwick.

Pateman and his fellow jumps jockeys in Australia today are few. To compete they have to travel – to Mt Gambier, Coleraine and Casterton, Oakbank, Warrnambool, Bendigo, Hamilton.

So he will never become a household name or deal with the dubious privilege of national adulation. Athletes who require much less courage and dedication will be thrust into the spotlight ahead of him.

I’m not trying to say he’s the greatest. I wouldn’t want to start the argument of comparing him with champion cross-country riders whom I admired forty years ago such as Tom McGinley or Ted Byrne. They rode in a different world.

What I am saying is, well done and good luck Steven Pateman. You deserve credit for your sporting accomplishments. Some of us are watching.

The Mounting Yard goes to Caulfield this week for a fantastic program of Group 1 racing.

What a great start to spring!

Usually I listen to, rather than watch, the races on a Saturday afternoon, discreetly using vital outdoor tasks like cleaning the gutters or pulling weeds as cover for my clandestine activities.

We head back to fabulous Flemington this week for Group 1 racing.

Supercars reaches the end of its four consecutive weekends of racing, as another round at the Reid Park street circuit in Townsville sees out a chunk of the 2020 championship. 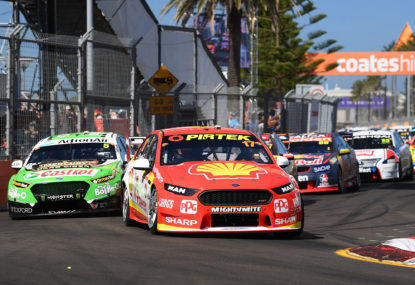 Welcome to spring, we got here.