North Melbourne victories over the AFL’s big guns have skipper Andrew Swallow refusing to write off 2014’s premiers coming from outside the top four.

Swallow’s side sit seventh heading into round 17 and with a relatively favourable run to the finals.

“It definitely is hard (to win from outside the top four),” he told reporters in Hobart.

“I don’t want to say you can’t do it but we want to give ourselves an opportunity to get there (and) we know we’ve still got a lot of work to do.”

“We’ve been inconsistent in our performances and probably, at the moment, we don’t deserve to be there but we’ll try to rectify that over the last seven weeks of the year.”

The other consistency in a bumpy season for North has been their ability to crash to strugglers.

A devastating four-point loss to Brisbane two weeks ago was the low point, with the Kangaroos desperate to prove last week’s rebound against the Hawks was a permanent turnaround.

A loss to last-placed St Kilda at Bellerive on Saturday would represent the ultimate eviction from the penthouse to the doghouse.

The Saints make their first trip to Hobart having lost 10 straight by an average of 63 points.

“We’ve been burnt before, this year, quite a number of times,” Swallow said.

“We’ve scratched our heads and we’ve gone through everything and I think it comes down to the mentality of the group.”

Swallow said the 20-point win over the Hawks had shown his side the level they needed to perform at.

“We were really disappointed with the loss against Brisbane,” he said.

“We think if we can match that (against Hawthorn), we can really set ourselves up to have a good crack at the finals.”

The Kangaroos are 2-2 from their first two seasons in Hobart, where the club is reportedly considering basing three games per season from 2015.

They continue to be without Jack Ziebell (knee) but welcome back Aaron Mullett for Liam Anthony.

Veteran Saints defender Sam Fisher will play his first AFL game in 13 months after a horror run with hamstring injuries.

Lenny Hayes and Tom Hickey also return for the Saints, who are $14 outsiders to snap their losing streak. 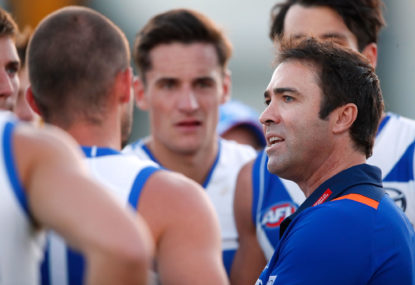 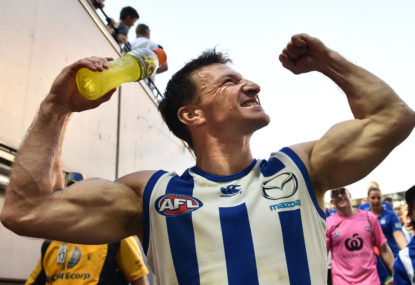