Warriors at the crossroads

If the Warriors had become dark horses and a dangerous team to play over the past few weeks, Saturday night was something of a setback.

The team from Auckland could not have had a better start, a 12-0 lead after 10 minutes, however much like the losses to Souths and Penrith, a terrible period cost them victory.

The fast start in Brisbane had some expecting a similar result to the Warriors’ last-start thrashing of the Eels.

The main difference was the performance of playmaker Shaun Johnson. Against Parramatta Johnson made line breaks, tackle breaks and assists with ease. Against Brisbane a couple of line break assists were all he could muster.

The Warriors’ hot form has been on the back of Johnson playing with maturity and guiding the team. While he wasn’t as dominant in this game, it was pleasing to see Chad Townsend really step up, making five tackle breaks and two line-breaks. Townsend looks to have seen the reemergence of Thomas Leuluai as a challenge to his spot, and he doesn’t want to give it up.

Under Andrew McFadden, the Warriors had been conceding an average of 17 points from a previous 22, so conceding 28 points was uncharacteristic. The most disappointing part was the one-on-one misses that led to tries. Ben Hannant going through the middle of the defence and Dale Copley leaving Ben Henry in his wake were two glaring misses.

Another was Sam Tomkins, who looks better and better on attack but defensively isn’t offering enough. His backing off on Dale Copley instead of coming forward was the difference in getting Copley over the sideline instead of Copley scoring the try before going into touch.

Manly will be an incredibly tough assignment. They may be at war with management, but they always but in 100 per cent and have class all over the park. The Warriors will want Johnson back to his best, and hope the Broncos game was an aberration.

The performance of Steve Matai for Manly will be intriguing. Matai wants a release to come to the Warriors in 2015, which has been denied, but he will want to show his prospective employers he is worth pursuing.

In recent games the Warriors have had to defend for several sets in a row. Against Penrith, South and the Broncos, an inability to complete sets put themselves under unnecessary pressure. The Broncos game included a fifth tackle option of going the short side and getting tackled on halfway. It may be a mental problem, but the Warriors need to address this as Manly will punish any prolonged periods of attack on the Warriors line.

Sunday should bring a cold but clear afternoon, perfect conditions for a open game of footy. Manly will be looking to continue their strong run, and the Warriors want to get back into the winners’ circle.

Those of you who have read my previous articles will know that I’ve always had a soft spot for Nathan Brown. 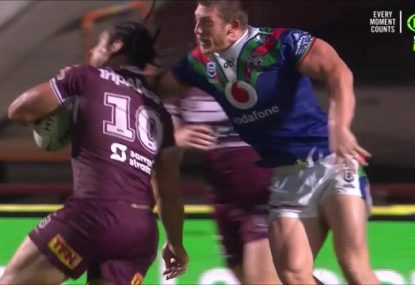