Why 1999 is my favourite year in sport

Pre September 11, pre Kim Kardashian being a celebrity, pre sharing pictures on an iCloud, 1999 was a great year. The world’s biggest threat wasn’t terrorism but whether our electronic devices would survive the Y2K Bug.

In sport it was a year where the extraordinary happened. I will never forget staying up with my brother to watch the 1999 British Open, even though Frenchman Jean Van de Velde had a big lead for the last few holes.

His three-stroke cushion famously evaporated with the biggest brain fade in sporting history on the 18th. His triple bogey forced a play-off but he would lose that to Paul Lawrie to complete the choke of the millennium.

It was a year where Sir Alex Ferguson’s brilliance as a manager shone like never before. Manchester United completed the unprecedented treble (Premier League, Champions League and FA Cup). Time and again he made the big calls with matches on the line, including introducing super sub Ole Gunnar Solskjaer to snatch the 2-1 win over Bayern Munich in injury time.

Aside from those two moments it was a golden year for Australian sport.

Stadium Australia – The Olympic Stadium – had just been completed more than a year out from Sydney 2000. The headlines weren’t about the ground being ill suited for rugby league but how it would surpass record crowd numbers. And it did, the NRL season opener double header had more than 100,000, which was bettered by the grand final.

Two years after the disastrous Super League war, rugby league finally felt like it was getting back on its feet (that was unfortunately ruined at the end of the season with the exclusion of South Sydney).

State of Origin helped, as the three-match series tied for the first time in the concept’s history. Game 3 ended up a 10-10 draw, with Queensland claiming the shield courtesy of winning the previous year. The Gorden Tallis versus Terry Hill face-to-face shirt pulling photo became immortalised as a symbol of Origin.

The fairy-tale story was the Melbourne Storm. In just their second year in the comp, the side won the premiership in a thrilling grand final – with Bill Harrigan making the right call to award a penalty try.

In Aussie Rules, Tony Lockett booted his way into history by surpassing Gordon Coventry’s record of career goals. Just like Shane Warne, Plugger was always one for theatre. He passed the magical 1300 mark at the SCG and despite pleas from security, no one could stop the ground invasion which followed.

Essendon appeared to be the team to beat all season but fell in the preliminary final to rank outsiders Carlton by one point. It was the first time since 1983 the minor premiers had failed to make the last day in September.

A desperate tackle by Fraser Brown prevented Essendon from having one last chance to tie up the scores. The Blues felt like they had just played a grand final and were unable to secure the premiership against North Melbourne a week later.

Aside from domestic highlights Aussie national sides pulled off some of the most memorable performances on the world stage. The semi-finals of the cricket and rugby world cups – both featuring South Africa – still give me goose bumps, and no doubt there’s still post-traumatic stress for South African fans.

The Cricket World Cup tie was enough to see Australia through to the final. The side had spent a bonding session at ten-pin bowling and it came in handy for Damien Fleming. His roll down the pitch perfectly lined up for Gilly to run-out Allan Donald, who temporarily forgot about needing to run in the game of cricket. As for rugby, all that needs to be said is Stephen Larkham. His first drop goal for the Wallabies is what legends are made of.

Speaking of legends, who could forget Sharelle McMahon’s efforts in 1999. The fierce rivalry between the Aussies and Kiwis continued on the netball court with the World Championships producing another classic. McMahon scored the winning goal with one second remaining. Her reaction after realising she’d won the game was priceless.

While we have some great talent to look forward to on the tennis court Australia has struggled to make an impact in the Davis Cup since it last won the trophy in 2003. Four years before that no one gave the Aussies a chance against France in the final. Playing away from home on clay, the tie was locked at 2-2. Enter Mark Philippoussis, who played the match of his life to beat Cedric Pioline.

As well as those unforgettable moments the Wallabies also won the Bledisloe Cup that year, the Kookaburras and Hockeyroos both won the Champions Trophy, the Kangaroos won the reformed Tri-Nations series, Mark Occhilupo and Lane Beachley were both surfing world champions and Susie O’Neill broke one of the oldest swimming records in the 200m butterfly.

The year 1999 was one of those rare years where miracles and amazing performances just kept happening.

Despite the odds the Australian never-say-die attitude came to the forefront and reinforced our world beater reputation.

His time of 12 minutes and 51 seconds was 27 seconds quicker than the previous mark. 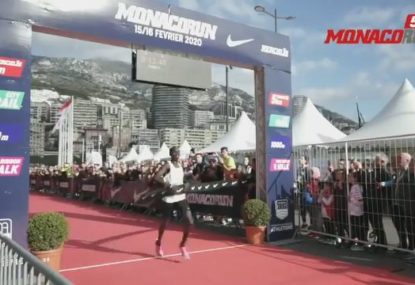