They say you need everything to go right to win a Melbourne Cup, and the same applies to the horse racing fantasy game Star Stable, which kicks off this Saturday.

Star Stable goes for five weeks and often has a field of more than 30,000 people lined up. And that makes it incredibly hard to win.

Star Stable is free and requires an equal dose of luck, skill and understanding how the competition works.

How the game works?
There is a $1m salary cap and you must select a team of 10 horses. Every horse available for selection is individually priced. The best horses, like Silent Achiever and Lankan Rupee, cost as much as $250,000 to bring into your team.

Unheralded three-year-olds and restricted-grade Saturday handicappers can be picked up for the basement price of $25,000. There is very little quality under the $150,000 mark, which means you must mix Group 1 winners with battlers to ensure your team fits under the salary cap.

The points your stable scores match the prize money your selected stable of horses earn on the track. But with the most important races worth as much as 50 times more than the least important, the key to Star Stable is having your stable peak on the big day.

Really, it’s what Bart Cummings has been trying to do with his stable for nearly 60 years.

Each week you can trade two different horses into your team. And on two different occasions, you can bring in a third horse by using a wildcard. This means you need to plan who you will bring in, and react to unexpected results.

You also choose a jockey and trainer to represent you, and take a cut of their real-life winnings as points in the game. They too can be swapped each week.

This year, you must nominate one member of your team to be the ‘Stable Champion’ each week and that horse will score double points for that meeting. That means having the Melbourne Cup winner as your Stable Champion will net you $7.2 million. That’s almost as much prize-money as there is available throughout the rest of the competition.

To make things interesting, the prices aren’t fixed. Horses will increase in value if they run in the top five of a Group 1, top three of a Group 2 or 3, or win a Listed race.

If you leave Silent Achiever out of your team on Saturday and she wins the Turnbull, it will cost you $325,000 to bring her into your stable before her next start. That’s almost a third of your starting budget.

For the first time ever in Star Stable, price increases aren’t capped at a maximum of $250,000. If you plan to bring a horse into your team just before their grand final race, it is now more risky than ever.

That means planning ahead is crucial. As a Star Stable veteran, here are some tips to help you out.

Only focus on the rich races
Every race counts but only focus on races that give a minimum of $600,000 to the winner. Every $600,000 race is important and you should look to have at least one representative in each of these races. $600,000 ($1m in prize overall) is a number I’ve used in Star Stable over the years and it seems to work.

Much like the 2014 autumn edition, what makes this spring’s Star Stable competition difficult is the cheap horses (25k or 50k) are woeful compared to what we have come to expect over the years. Essentially, if a horse older than three years old has shown Group potential it is an expensive commodity.

Don’t fall into the trap: Not every Group 1 race this spring counts
The Spring Champion meeting at Randwick on October 11 is not part of the game and neither is the Manikato meeting on October 24. That means horses won’t earn prizemoney or price increases for their performances in these races. But for the first time in a few years, the Thousand Guineas, now on Caulfield Guineas day, is part of Star Stable.

The middle day of the Caulfield carnival, much like the Geelong and Bendigo Cup meetings, remains outside of the game. In other words, no midweek meetings before Cup week count for Star Stable.

The beauty is that a lot of cheap horses will be running in the Caulfield Classic. If you’re looking to fill your stable with cheap horses to fit under the salary cap, look no further than Saturday’s UCI Stakes at Flemington. It is the main Caulfield Classic lead-up and key chances like Atmosphere and Light Up Manhattan are $25,000 in Star Stable.

Who are some of the better bargain basement buys?
Three-year-olds are the way to go here. I’ve earmarked Sweynesse, Atmosphere and Light Up Manhattan as the three best $25,000 shots. Be careful with Sweynesse. He might be undefeated but he’ll be running in the Spring Champion next weekend which doesn’t count. A trip to Melbourne for the Derby and $900,00 first prize, however, is probable.

At $50,000, Caulfield Guineas chance Shooting To Win leads the way.

Star Stable are expected to add more horses into the game after the time of writing this article on Thursday night so keep an eye out for horses running on Saturday in races like the aforementioned UCI Stakes.

I was a big wrap for Husson Eagle and Tudor at $25,000 but I expect both to run Wednesday week at Caulfield in the rich Blue Sapphire. That race isn’t part of the game so I had to pass on both promising three-year-olds.

The key to a cheap buy is ensuring they add something to your stable. You won’t have a high finish if you’re carrying more than one horse that does not have a big Group 1 aim. And by big Group 1 aim, I’m talking about the races that offer more than $600,000 to the winner.

Which horses should every stable own?
Hallowed Crown at $100,000 should be in everyone’s stable. He should win the Group 2 Roman Consul at Randwick on Saturday and earn a $50,000 price increase for doing so. He can then be traded out to a leading player in Group 1s on Guineas Day.

I wouldn’t hold Hallowed Crown for the whole game because his next run after Randwick will be on Derby Day in the $300,000 to the winner Coolmore Stud. And that is too long to hold a middle-priced horse.

I’d expect most stables to select Rich Enuff. This horse is the Caulfield Guineas favourite and at $75,000 is heavily under-priced. Rich Enuff possesses a world-class turn of speed. He is definitely a freakish talent.

What races should you be targeting already?
The Caulfield Guineas ($600,000, 11 October), Caulfield Cup ($1800, 18 October) and Cox Plate ($1800, 25 October) should be at the forefront of your mind when selecting your stable. The Caulfield Guineas comes up fast next weekend, so make sure you have at least one Guineas hope in your team.

The Caulfield Cup should be a prime focus for smart Star Stable players. The race often gets lost. A lot of players will have stacked Cox Plate teams because weight-for-age horses attract the eye, and it is also likely that at least one popular Guineas elect will back-up in the Cox Plate, further bolstering people’s attack on the race.

But, in recent years, a horse at double-figure odds usually wins the Caulfield Cup and that means you often need a solid number of Star Stable representatives to jag the winner. Start the game with at least one horse aiming for the Caulfield Cup.

Better still try to pick Caulfield Cup horses that will have their final Cup lead-up on Saturday. That way you’re killing three birds with one stone – getting your stable off to a good start, increasing your team value and getting your Caulfield Cup team up and running. Horses that qualify are the likes of Lucia Valentina, Rising Romance, Hawkspur, Who Shot Thebarman, Junoob and Spillway.

Start your stable with your top pick for the Cox Plate. My Cox Plate tip at the moment is Fawkner, whose next start will be in the Caulfield Stakes next week. I think he’ll win that race.

I’ve started him in my team at $225,000 because my focus next week will be on ensuring I nail the Caulfield Guineas and my trades will be spent on three-year-olds. I want Fawkner in my Cox Plate team and to avoid having to pay a ludicrous $300,000 for him after Guineas day, I’ve started him.

I’ve also got Happy Trails in my stable. He’s running in the Turnbull on Saturday and will be hard to beat. At $225,000 he’s expensive but he’ll be even more expensive on Sunday if he runs to my expectations.

A few final rules
For this spring, don’t pick too many Sydney-based horses unless they are confirmed for Melbourne. Only one Sydney meeting counts for Star Stable and it’s Saturday’s Super Saturday meeting at Randwick.

As I said above, don’t have more than one horse in your stable that you think is not a Group 1 horse or at least has Group 1 potential. This game is called Star Stable for a reason. You need power.

Make sure you have a few horses running on Saturday. You cannot do well in Star Stable, or at least your best, without a decent start. But it is more important to be looking to the future.

Don’t load your stable with Melbourne Cup horses. Yes, the race is worth $3,600,000 to the winner but there are more important races to nail before the Cup in a month’s time. Keep one on the race but don’t go overboard with selection. Otherwise you’ll run the risk of having to do what Kiwi did in the 1983 Melbourne Cup – come from last to win the prize.

Save at least one wildcard trade for Derby Day. By that stage of the competition, with the critical Melbourne Cup looming on the horizon, most stables will be hard-pressed to put out a competitive Derby Day team (remember there’s four Group 1s including the rich Derby and Mackinnon on the November 1 card). A wildcard will be a necessity come the Derby.

The Mounting Yard heads back to Caulfield this Saturday for an action-packed winter race day, with the Group 3 Bletchingly Stakes headlining the program for which Virdine opens as the $3.40 favourite. 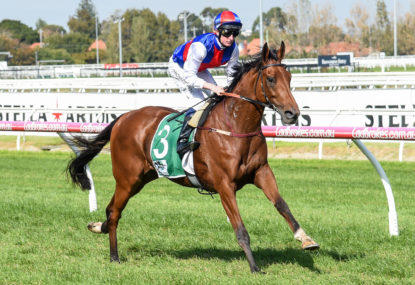 After another small win last week, winter racing isn’t that bad after all!

The Mounting Yard heads back to fabulous Flemington this week for a nine-race winter program.