After benefiting from an easy draw last year to return to the finals for the first time since 2007, many predicted that Port Adelaide would suffer the dreaded second-year blues under the coaching of Ken Hinkley.

But they eventually got to within a kick of the grand final after finishing fifth at season’s end.

It was a season full of many highlights for the Alberton faithful, who not very long ago were forced to endure years of underperformance which included losses to the Gold Coast Suns and Greater Western Sydney Giants.

Let’s now take a look back at Port Adelaide’s 2014 season and see what went right and wrong for the club.

What went right?
The Power built on their strong 2013 campaign, shooting to the top of the ladder after Round 6 after defeating the Geelong Cats by 40 points. They also enjoyed a strong victory over Hawthorn a month later, officially closing the chapter on the darkest period in the club’s history.

Chad Wingard backed up his All-Australian season with a number of strong performances, including taking the mark of the year against St Kilda in Round 12.

And not to be outdone, Matt White kicked the goal of the year against his old side, Richmond, in Round 17.

Jay Schulz presented well up forward, being the club’s leading goalkicker for the season including kicking a bag of eight against the Western Bulldogs in Round 14.

The club also celebrated the 10th anniversary of its 2004 premiership, replicating its main guernsey from that year and dishing out more pain to the Brisbane Lions, their victims in the grand final that year, defeating them by 113 points at the Adelaide Oval in Round 4.

What went wrong?
A few losses in the second half of the season saw them drop from top spot after Round 14 to fifth after Round 17, and that was where they would remain until the end of the regular season.

During this stretch, there were narrow losses to the Sydney Swans (four points), Essendon (two) and Collingwood (six), while they also lost the match against Fremantle which decided who finished with the double chance (eight).

They also suffered a 23-point loss to cross-town rival Adelaide, who then had a victory over Port as far as the average home attendances were concerned, despite failing to reach the finals for the second year running.

Best win: defeated Fremantle 15.15 (103) to 11.17 (83) in the first semi-final at Patersons Stadium
Port Adelaide may have enjoyed victories over Geelong and Hawthorn during the regular season, but it’s hard to go past their come-from-behind victory over Fremantle in the second round of the finals series.

Entering the first semi-final at Patersons Stadium, only three teams had finished outside the top four but reached the preliminary final.

Ken Hinkley’s men became the fourth team (and second after North Melbourne the previous night) to achieve the feat, and they did it very impressively, coming back from 31 points down in the second quarter to win by 22 points.

Robbie Gray stepped up when the team needed him to, kicking four goals in the third quarter, the last of which put the Power up by two points at the final change.

Eventually, it was the inaccuracy of the injury-hit Dockers, and Port’s never-say-die attitude, which earned Port Adelaide victory and a first preliminary final berth since 2007.

That was against the Swans and was caused by inaccurate kicking, whereby they could only manage 7.16 (58) from 23 scoring shots, just one less than what Sydney (12.12 (84)) had for the match.

That said, the Power missed many opportunities in front of goal, including some gettable shots. Coach Ken Hinkley said in the press conference that the team failed to convert when it mattered most, kicking away their chances of victory in the process.

The future
Having improved on their performance in each of the last two years, the next goal for Port Adelaide would be to reach the grand final, which they got so close to achieving when they fell to Hawthorn by only three points.

The only notable departure from the club is that of former captain Domenic Cassisi, who led the club through its most difficult times before relinquishing the captaincy at the end of 2012, with Travis Boak inheriting the armband in 2013.

It’s hard to believe that this is the same team which three years ago only just avoided the wooden spoon when it defeated Melbourne in the final round of the regular season.

But flash forward and the team coached by the no-nonsense Hinkley has the potential to add another premiership to its lone success in 2004. Without a doubt, they will be the team to watch in 2015, with the narrow season-ending loss to Hawthorn spurring them on. 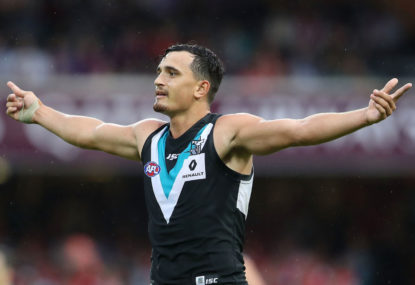