Victoria’s Scott Boland celebrated career-best bowling figures as NSW finished 8-266 at the MCG on day one of the Sheffield Shield season.

Kurtis Patterson and Scott Henry shared a fluent 99-run stand, while Ben Rohrer top-scored with 70 for the visitors.

Boland, who kept it tight all day, snaffled four wickets in a destructive five-over spell with the second new ball.

It was sweet reward for a paceman who has worked hard on his fitness since debuting in 2011.

“If that was two years ago I would have been pretty cooked. It was quite a hot day out there,” he said.

“I was pretty tired, but once you get a wicket you always get your tail up a bit. Once I got one and knew we were getting down to the tail I was happy to keep bowling.

“All the things I’ve been doing for a couple of years has been leading up to this and it’s nice to get a little bit of a reward.”

“He was really patient … he’s come along in the last year,” Rohrer said of Boland, who boasted figures of 2-3 from eight overs at lunch.

“They throw him the ball when they’re under pressure … that’s how highly he’s regarded in those sheds and he showed why today.”

Rohrer was one of three NSW half-centurions that failed to take control of the game after Bushrangers captain Matthew Wade sent them in.

“It’s been a thing we’ve spoken about, even through the one-dayers, guys are getting starts and getting 40 to 70-80 and nobody’s making a big score,” he said.

“That’s definitely a concern within the team and something we’ll be looking to rectify pretty quickly, hopefully in the second innings.”

Debutant Nick Larkin and Ryan Carters looked relatively comfortable against the new ball, but Boland dismissed both to reduce NSW to 2-30.

Legspinner Fawad Ahmed dismissed both Patterson and Henry, clean bowling the latter with a short ball. 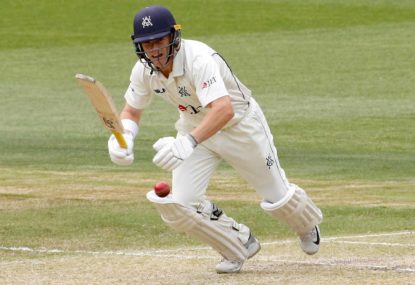