From blown opportunity to facing up against Jerry Collins

I always wanted to be a rugby league player.

My early childhood years were spent glued each weekend to my heroes on show in the Winfield Cup, my father taking me to Parramatta Stadium to sit on the hill and watch my beloved Eels play.

I had a huge framed picture of Peter Sterling above my bed, and the pockets of all my jeans smelt of the bubble gum you used to get in the packets of playing cards that I collected each week from the local newsagent.

After three years of playing soccer (the usual go to introductory ball sport for parents to put their kids through, as it contains less contact), I was ready to embark on what I would hope to be a successful career in the 13-a-side game.

I went to my father and explained to him of my intentions to play league, to follow in the footsteps of my idols of Kenny and Sterling and get involved with a local leagues club.

In no way did I expect the response I got. To my surprise and extreme disappointment, he suggested that I should change my focus to rugby union, explaining that it was a more worldly game, and that in the future, it would open up more opportunities for me.

I couldn’t believe what I was hearing.

Here was a man who was rugby league through and through. Growing up in Eels heartland, a stones through away from the ground, even working at the car park of the stadium with my grandpa.

It was also in the pristine enclosure of the Parramatta Leagues Club, amidst the stench of Victoria Bitter and Winny reds, that he first met my mother.

After a few tears and even a few more tantrums, I sought to explore and learn more of this union game that I knew nothing about.

I joined Beecroft/Cherrybrook junior rugby club, then was enrolled at St Joseph’s College. It was here that my education and love for the game would blossom, as league would become a faded memory in the back of my mind.

Looking back, after over 15 years in the game, the last five being my full time profession, the advice from my father was invaluable, and the catalyst for the most enjoyable period of my life thus far.

Like he said all that time ago, It has opened up countless opportunities to travel, meet incredible people, while at the same time shaping the way I live my life and how I am as a person.

In no way am I downgrading the power of rugby league to do exactly the same thing, as it has provided many with the same opportunities that I have been given, but in my personal experience, it was union.

Fulfilling my new dream of being a professional rugby union player didn’t come easily. I had to overcome several challenges and setbacks before signing my first professional contract with the NSW Waratahs in 2009.

After finishing school at Joeys, I spent five years playing Shute Shield in Sydney with Norths and Manly, completing a University degree in media at the same time, and also working full time. There were a couple of trials at the Western Force, but nothing concrete that gave me the confidence to fully commit to rugby as a profession.

As I sought to give myself stability for the future, an office job seemed like the best option, it would give me a steady income and seemed like less of a risk than continuing to pursue a professional rugby career.

I took a job at a media company at the beginning of 2009. Like all entry level jobs, I started at the bottom and was ready to begin my climb up the ladder, when only two months into my new role, I was offered a professional development contract at the NSW Waratahs.

I didn’t know what to do. As is the case with development contracts, I was offered a small monthly salary, much less than what my new media role offered. It required me to train full time with the professional squad, which meant there was no possibility of holding on to my current job while training.

After many conversations with friends and family, I chose to take the risk. I left my media role and began pre season training with the Waratahs in the summer of 2009.

After my initial week with the ‘Tahs, I immediately thought I had made a huge mistake. I was so far out of my comfort zone and out my depth, training alongside seasoned veterans who had been in the game so much longer than me.

My fitness, strength and nutrition scores were well below that of even the average player, and the intense competitive environment was like no other I had ever experienced.

This is a challenge all debutants a faced with when stepping up from amateur to professional. It’s not an easy task but that’s what pre season is for, six to eight weeks to get you primed and ready for the competitive season.

By the end of the training period of pre season, my strength had improved, I was much fitter, and through a few tweaks in my daily nutrition, cut down my body fat composition by over 50per cent. I had met and conquered my first challenge.

Up next were the pre season trial matches. For unknown and new names like myself, these were so important in showcasing why I was given a contract in the first place, and the only chance outside weekly club competition that the coaches would see me in action. If there was ever a time to put in an eye-catching performance. now was it.

In the first trial match against the Queensland Reds I had an absolute nightmare of a game. Whether it was nerves or just bad luck, I dropped the ball numerous times and made mistakes that I would never make week in week out at club level.

The following two trial games against a Fijian touring side and the Brumbies went much better than the first, but the damage had already been done. I’d had my chance, and I’d blown it.

Back came the questions of whether I’d made the right decision choosing rugby, and the next six months were spent training with the squad while playing club rugby in the Shute shield with Manly in the hope of getting a crack at Super Rugby.

Unfortunately the knock on the door never came, and while I loved playing for the Marlins each Saturday with a great bunch of guys, I wanted to play at the top level, and at the age of 24 this was becoming less and less likely.

However within the space of a month, my rugby career and life was turned upside down. After one game down at Manly Oval, I was approached by Les Kiss, an ex-North Sydney Bear, and at the time defensive coach for the Irish rugby team. He sought to know more about my Irish heritage (my grandfather hailing from Tipperary in south Ireland), and mentioned there might be an opportunity to play in Europe.

While excited by what Les was proposing, I didn’t truly believe that it would be a reality, until I got a call from David Humphreys, the director of rugby at Ulster, a club based in Belfast, Northern Ireland.

He asked me to come over for a two-week trial, to train with the team and partake in the pre season fixtures before the start of the 2010 Magners League competition. If all went well, a full time professional contract was waiting.

With only an overnight bag and some boots, I left Sydney four days later, and arrived in windy, wet Belfast and got acquainted with my new teammates and down to business.

I was training well, but the real test was to come in the first pre season match against Leeds the coming weekend. My mind was flooding back to the memories of that horror night against the Reds.
Things couldn’t go any worse than that could they?

Fortunately they didn’t. I performed well and the next week was offered a one year contract with Ulster.

In the space of three weeks I’d gone from lining up against Gordon at Chatswood Oval, to coming face to face with Jerry Collins and the Ospreys in the first competition match at Ravenhill.

I went on to play 24 games in my first season, including a Heineken Cup quarter final, and re-signed with the club for a further two seasons before leaving for a trip around Europe in our four-week break. After leaving Ulster, I spent a season at Bristol in England, before returning home in June 2014.

I returned a more experienced, confident individual on and off the field than the one who nervously boarded that flight to Belfast four years ago. I’d overcome the tough challenges of being away from friends and family, as well as the daunting task of being a smaller player competing against Europe’s finest rugby players in at times atrocious conditions.

Through my mistakes, I became more aware of what I needed to do to succeed. I learnt to relax and enjoy the moment, as what I was doing few people get the chance to do.

If you would have told me when I left Sydney all that time ago, or after my horror night against the Reds, that I would return having played a Heineken Cup final, travelled throughout most of Europe, met and made lifelong friends from all four corners of the globe, as well as tapping into rugby’s profound network to aid in the next stage of my career, I would have laughed at the thought.

Sometimes you just have to realise that you’re stronger than you think, and that nothing, no matter how unrealistic it seems to be, is impossible.

Oh and I almost forgot, thanks Dad. 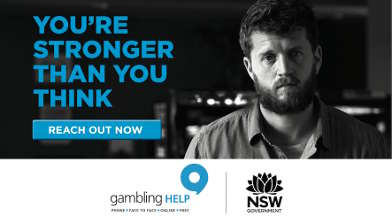 We’ve all faced setbacks that were tough to overcome. Problem gambling can feel like that. It feels like that to thousands of Australians every day.

But we’re all stronger than we think and help is just a mouse-click away.