25 players to light up the Asian Cup

With the Asian Cup just two and a half weeks away, what better way to get the ball rolling than with a countdown of the 25 players set to boil in the Australian heat?

A look at the latest FIFA rankings reveal that not one Asian team is currently ranked in the top 50, with Iran (51), Japan (54) and South Korea (69) leading the way.

The Socceroos rank a measly 100th (behind renowned powerhouses Mozambique and Belarus), just two places better off than the lowest position they have been ranked since the ratings began in 1993.

Therefore, the players on the following list could be aptly described as the ‘best of a bad bunch’.

They will aim to not only restore Asia as a competitive force in World football, but more importantly create an unexpected deterrence to the emblematical Australian summer of cricket and tennis.

These are the pick of the men who will be showcasing their talents on Australian fields this summer (well just the east coast – sorry Adelaide and Perth).

Owner of probably the second-best attacking header in Asian football behind Timmy, Hazazi has a phenomenal return of 22 goals in 25 games for Al-Shabab. Having starred in Nike’s first ever Middle Eastern advertisement, Hazazi will be aiming to deliver Saudi Arabia its first Asian Cup triumph since 1996.

Has the potential to become what Quade Cooper was to New Zealand in the 2011 Rugby World Cup – public enemy No. 1. Al-Shamrani received an eight-match ban for spitting and head-butting Australia and Western Sydney defender Matthew Spiranovic in the Asian Champions League final.

Named Asian footballer of the year in 2014 despite the incident, he has netted 39 goals in 51 appearances for Al-Hilal.

Yoshida has been used sparingly in the Southampton side this season, with Jose Fonte and Toby Alderweireld the preferred centre-half pairing. However as the undisputed leader of the Japanese defence, he will be the man called upon to mark Tim Cahill from corners in the final (all going to plan!).

He goes into the tournament full of confidence after scoring a header in a win over Everton on the weekend.

Potentially the most important player in the Socceroos side, as Australia desperately needs someone not named Cahill or Jedinak to find the back of the net. After missing the World Cup with an ACL injury, Kruse is struggling for minutes at highflying Bayer Leverkusen.

If Kruse can rediscover his 2012-13 Bundesliga form (four goals, seven assists), he could prove decisive in turning around the Socceroos’ recent fortunes.

Shojaei played five seasons in La Liga with his compatriot Nekounam at Osasuna, registering eight goals and 14 assists. The dynamic yet injury prone midfielder is a joy to watch with the ball at his feet.

Currently playing in Qatar after turning down an offer from Real Zaragoza, Shojaei will be influential in an Iran side that should top Group C.

Australia’s incumbent number one hasn’t had the best of starts to his international career, conceding nine at the World Cup. However Ryan has received rave reviews in Belgium for his displays at club level, including being named the Belgium Pro League Goalkeeper of the Year in 2013-14.

His performances in the Gold will have to improve with Langerak and co waiting in the wings.

The Omani captain will have to be at his very best from the outset with games against South Korea and Australia on January 10 and 13 respectively. The Wigan man has been linked with an emergency loan move to Newcastle United in the past week.

An outstanding penalty saver – Al-Habsi has saved approximately 50 per cent of attempts since joining Wigan.

A two-time Asian Footballer of the Year winner, Djeparov’s natural playmaking and ability from free kicks will be on show in Australia. Captain of the side despite speaking fluent Russian and barely any Uzbek, Djeparov registered two goals and two assists last Asian cup.

Playing behind Okazaki at Mainz, Koo has three assists in 25 games. The former South Korea captain will look to provide flair with his agility and dribbling ability for Uli Stielike’s men.

A former German U-21 international, Dejagah pace and ability to dribble past defenders will provide Iran their best attacking outlet.

After never being selected for the German first team, the winger scored a double on his debut for Iran in 2012. Dejagah scored 19 goals and 25 assists in his Bundesliga career, and was voted Fulham’s player of the year in 2013-14.

The much-hyped Ali has been given the nickname ‘Asia’s Gareth Bale’ by Turkish media due to his superb left foot and ability from long range.

Named Asian Young Footballer of the Year in 2013, another strong showing at this Asian Cup will inevitably see Ali linked with Europe’s top clubs.

Despite plying his trade in the Championship for the last three seasons, new Bolton boss Neil Lennon said last weekend, ‘he’s world class and would grace any team in the country.’ After scoring twice in the 2010 World Cup, Lee’s fortunes took a dive in 2011, where a broken leg coincided with Bolton’s relegation.

In the form of his life, the Australian captain has come along leaps and bounds in recent years. Rated the seventh-best player in the Premier League this season, he was vital in keeping Crystal Palace up last campaign.

Highly regarded for his dogged tackling and intercepting, his stunning free kick goal against Liverpool last month was a pleasant surprise.

Heavily linked with Arsenal earlier this year, Uchida has been a regular in the Schalke defence for over four seasons. Named in the Bundesliga team of the season two years running (although it is a fan vote and Japan has a large population), Uchida also has the honour of voicing a character in a Pokémon film.

The Iranian captain is expected to be fully fit despite suffering a right knee injury training for Osasuna last Tuesday. A hero in his homeland, Nekounam will retire and join the national team coaching staff following the tournament.

Despite being injury prone, the talented playmaker has carved out an impressive career with 26 goals in 173 La Liga games.

Denisov was named as the left back in the 2013-14 Russian Premier League team of the season. His six assists helped Lokomotiv to third place in his first year in Russia.

A late bloomer like Jedinak, he spent the previous six seasons of his career in the Ukraine. Not selected in the 2011 squad, Denisov will provide pace and stamina as Uzbekistan aim to top Group B.

Kiyotake was given just five minutes of game time in Brazil under the now retired Alberto Zaccheroni.

His performances in the Bundesliga in recent years should warrant him a starting berth alongside Kagawa and Honda in Javier Aguirre’s side. The agile midfielder has contributed 10 goals and 21 assists in 78 league games for FC Nurnberg and Hannover 96.

After leading Uzbekistan to the semi-finals in 2011, Ahmedov will once again be integral to the hopes of the White Wolves. Noted for being strong defensively as well as for his long-range shooting, he moved to fellow Russian club FC Krasnodar following the relegation of former club, Anzhi Makhachkala.

He bagged a brace in his last outing for Uzbekistan in a 3-1 win over New Zealand.

After a couple of largely unsuccessful seasons at Stuttgart, Okazaki has been on fire since joining Mainz. Only Robert Lewandowski (27) has more goals in the Bundesliga than Okazaki’s 23 since the start of the 2013-14 season.

Strong in the air and a great sense of positioning in the box, coupled with Japan’s talented midfield should see him thrive.

The South Korean captain has started all 17 of Swansea’s league games so far this campaign, contributing goals against Manchester United, Crystal Palace and Hull. A fluent English speaker renowned for his vision and long-range passing, Ki completed three years of schooling in Brisbane before returning to South Korea.

He will aim to lead South Korea to their first Asian Cup triumph since 1960.

Arguably the greatest Socceroo of all time, this fine wine has shown no signs of slowing down. After a terrific showing in Brazil, Cahill has more goals than any other Asian player in World Cup history.

His longevity stems from his world-class heading ability and positional sense. While his MLS form has been down this season with three goals and two assists from 22 games, Cahill will look to once again save his best form for the green and gold.

The first Asian player in Inter’s history, Nagatomo has been a regular starter for his club’s backline since 2011.

His accurate crossing has led to 12 assists since joining his current club. Having played in every game in the 2011 Asian Cup triumph, Nagatomo will again be relied on to use his blistering pace to provide defensive cover and create attacking opportunities down the left flank.

A lethal finisher in front of goal, Australia’s maligned defence will have their hands full at Suncorp Stadium on 17 January.

Son has scored nine goals in all competitions this season, including three in helping propel Leverkusen to the knockout stages of the Champions League. Bought for 10 million euros in 2013, Son’s explosive pace and dribbling ability help make South Korea title contenders.

Voted Player of the Tournament in the 2011 Asian Cup, Honda has been a bright spot for an AC Milan team in decline this season.

With six goals and two assists in 15 league games, he has proven that he can perform in one of the top leagues in Europe after four seasons with CSKA Moscow. Japan will be counting on Honda’s dribbling and ability from set pieces to help them retain the cup.

However the 2012 AFC International Player of the Year’s vision, movement and deft passing still make him a formidable danger to opposing defences.

There you have it. An accurate list? Way off the mark? Let me know with a comment below!

The UEFA Champions League is the Holy Grail of club football and few have stamped their name on the competition like Cristiano Ronaldo. The Portuguese superstar holds almost every goal-scoring record in the competition and is the proud owner of five trophies – as many as Barcelona have in the club’s history. Ronaldo guided Manchester […]

Neymar Jr is perhaps the most heavily criticised footballer of the modern era. 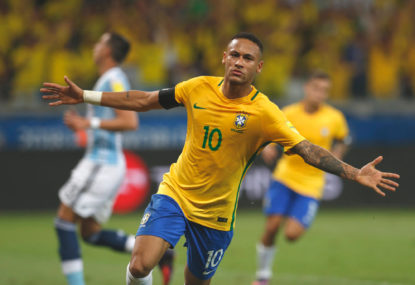