Ten years of Djokovic and Ivanovic at the Grand Slams

This year’s Australian Open will mark the tenth anniversary of the debut of two of Serbia’s most popular and established tennis stars.

It was at the 2005 Australian Open where Novak Djokovic and Ana Ivanovic made their debuts on the big stage, and both endured mixed fortunes as they launched their fledgling careers.

En route to qualifying for his first Grand Slam tournament, Djokovic defeated future rival Stan Wawrinka in the second qualifying round, but after making it to the main draw he would be pitted against eventual champion Marat Safin in the first.

Safin had come off a resurgent 2004 in which he had reached the Australian Open final, only to be beaten in straight sets by Roger Federer, who by winning the title claimed the world number one ranking for the first time.

The then 17-year-old Djokovic would be no match for Safin, who would carry his impressive form from late 2004, during which he won three titles, into the new year with a straight-sets thrashing, 6-0, 6-2, 6-1.

Safin would then go on to win the title, saving a match point against Federer in the semi-finals – going on to defeat home hopeful Lleyton Hewitt in the final in four sets to claim his second Grand Slam (and last career) title.

While Djokovic, who would later win four Australian Open titles, had it tough going, the younger Ana Ivanovic fared better in her Grand Slam debut. In fact, she entered the Australian Open having just won her first career title as a qualifier in Canberra the previous week.

Her first Grand Slam match saw her pitted against second seed and now-retired Czech veteran Iveta Melzer (formerly Benesova). She dropped the opening set and appeared set to exit the tournament when the second set went to a tiebreak.

However, Ivanovic would display maturity beyond her years to steal the second set, then take it in three, to advance to the second round.

She then thrashed Maria Kirilenko (who at the French Open the previous year managed to win a set off Serena Williams before losing in three sets), losing just two games before ultimately succumbing to second seed Amelie Mauresmo in the third round.

The French Open later that year would see Ivanovic advance to her first Grand Slam quarter-final, stunning the home fans when she turned the tables on Mauresmo in the third round by way of a three-set victory.

She eventually lost to Nadia Petrova in the last eight, while in the men’s division Novak Djokovic recorded his first match victory at Grand Slam level with American Robby Ginepri being his first victim.

Ivanovic’s impressive debut season saw her ranking rise from 97 at the start of the year to a very impressive 16. For that, she was named the WTA’s most improved player of the year, an award she would win for a second time two years later.

It was 2007 when both players started to garner some success for their war-torn country. Ivanovic made the final of the French Open, defeating Svetlana Kuznetsova and Maria Sharapova en route, but was overcome by nerves as Justine Henin dominated her mercilessly by winning in straight sets.

Djokovic, on the other hand, reached a pair of Grand Slam semi-finals, both his first, at the French Open and Wimbledon, losing on both occasions to Rafael Nadal.

At the US Open, with projected semi-final opponent Nadal out of the way, he went one better, reaching the final before losing to Roger Federer in straight sets.

The following year saw both players take it up a level.

At the Australian Open, Djokovic would avenge his US Open final loss to Federer by denying him a shot at a third-straight Melbourne Park title – he eventually won his first Grand Slam title by defeating Jo-Wilfried Tsonga in four sets in the championship match.

By doing so, Djokovic became the first Serbian man or woman to win a Grand Slam title. Ana Ivanovic had the chance to achieve this feat first when she opposed Maria Sharapova in the women’s final, but failed to do so, losing in straight sets.

Despite the disappointment, Ivanovic would then enjoy her moment in the sun, returning to the French Open final in June and overcoming a tough draw to win her first (and so far only) Grand Slam title at the expense of Dinara Safina.

The very next Grand Slam tournament would see both Djokovic and Ivanovic suffer unexpected early exits – the former was sent packing in the second round by Marat Safin, the very man who defeated him in his Grand Slam debut way back in 2005, while 48 hours later the latter was upended by Chinese wildcard Zheng Jie.

Both their conquerors went on to reach the semi-finals; for Djokovic, it was the second last time (to date) in which he would exit a Grand Slam tournament before the quarter-finals, while for Ivanovic it was only the beginning of her ongoing Grand Slam struggles.

Only twice since then has the current WTA number five gone past the quarter-finals at Grand Slam level: First at the 2012 US Open, where she was no match for Serena Williams, and secondly at last year’s Australian Open where she lost to Eugenie Bouchard after upsetting Williams in three sets in the fourth round.

Sadly, her lack of confidence, poor form and struggle to handle the pressure of being a Grand Slam champion saw her ranking drop from its peak of number one in June 2008 down to 65 just twenty-five months later.

But today she again finds herself ranked fifth in the world and as such will be seeded that high at the Australian Open which starts on Monday. It will be her highest seeding at a Grand Slam since the 2009 Australian Open.

With very little to defend at the three other Grand Slam tournaments, the opportunity to crack the top four will be one of the major goals for Ivanovic in 2015 as she looks to continue an impressive resurgence.

By contrast, Djokovic has continued to go from strength to strength since winning his first Grand Slam title seven years ago, staying in the top four ever since entering the bracket for the first time in mid-2007 and ascending to world number one upon winning Wimbledon in 2011.

The current ATP number one currently has seven Grand Slam titles and will have the chance to make that eight if he can regain his Australian Open crown this year.

He will be spurred on by his heartbreaking five-set loss to Stan Wawrinka in last year’s quarter-finals, which ended his bid for four straight Australian Open titles and a record fifth.

However, the main goal for Djokovic this year will be trying to finally win that elusive French Open title, which Rafael Nadal has the chance to win for a record-breaking tenth time this year.

Djokovic may want to seek some advice from Ivanovic, who won this very title on her second attempt in 2008 twelve months after losing to Justine Henin in her first final appearance.

Should Djokovic reach the final this year, it will be his third appearance in the French Open final, and he will be hoping that it is third time lucky after two previous losses to Nadal (both in four sets) in 2012 and 2014.

Winning this year will complete a Career Grand Slam for the Djoker, and see him join Nadal, Federer, Andre Agassi and Rod Laver among others in the club of players who have won each of the four Grand Slam tournaments.

For Ivanovic, on the other hand, time is running out for her to win a second Grand Slam title. While she did have a resurgent 2014, her Grand Slam struggles still remains a concern, and that is something she will have to work on if she is to become a contender at the major events once again.

A decade has now passed since these two names first graced the Grand Slam stage. We tennis fans hope that they continue to perform well not only at this stage, but also on their respective Tours.

The champions always find a unique way to prove their doubters wrong, don’t they? The greatest virtue of any champion is that they adapt to any conditions or situations to achieve the desired result. 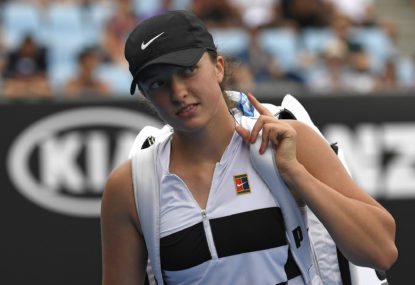 Spaniard Rafael Nadal has inflicted one of the most humiliating defeats on his great rival Novak Djokovic in the French Open final, thrashing the world No.1 6-0 6-2 7-5 to lift a record-equalling 20th Grand Slam men’s singles title. Tennis fans would have been salivating at the prospect of another epic clash in one of […]

Roger Federer may have seen his prized men’s record haul of 20 grand slam singles titles matched by Rafael Nadal – but if the Swiss great was feeling just a little peeved, he certainly did not show it as he was quick to offer his congratulations to his Spanish friend and rival.