Shark Watch Round 1: Is it too early to sound the alarm?

Last week I wrote that I thought the Cronulla-Sutherland Sharks would make the top eight.

Well, if the Sharkies continue to play like they did in Sunday’s 24-20 loss to the Canberra Raiders I think I’ll need to revise that prediction!

With a first up loss in a home fixture that many were considering their best possible chance to kick off their campaign with a win, it was a disappointing start to say the least.

But fans of the black, white and blue shouldn’t lose hope just yet, there were some positives to take out of the match, and while it was a very mediocre display, awful at times, they only lost by four points.

Here are some talking points out of the game from a Sharks perspective.

Ben Barba
While clearly a work in progress, and putting in a below par performance, Barba still had some nice touches, playing a big part in two of the Sharks tries. The cut-out ball he threw to Sosaia Feki to score in the corner was a beauty, and he created the opportunity for Ricky Leutele to get outside his man and bustle over.

Being a marked player, he will draw the attention of defenders, so if he can continue this kind of service to his outside men the Sharks should have some tries down the flanks in them. His kicking game was terrible and, while not a noted kicker, reeked of nerves.

I still think Barba can become the five-eighth the Sharks are looking for but it will take time. It was his first outing for a new team and the spotlight was on him, he will be all the better for that first run. But for a side that will be battling it out just to scrape into the top eight, fans will be hoping things click sooner rather than later.

Barba has said that knowing coach Shane Flanagan is going to stick with him at no. 6 and not shuffle him around gives him the confidence that he can grow into the role, and from what we saw on Sunday I think Flanagan should and will persist with him in the halves for the time being. A big game on Friday night against his last team, the Broncos, could be just the tonic for him to find his mojo.

Discipline
With a completion rate of just 64 per cent, 18 missed tackles, 13 errors (including two knock ons that led to tries), and six penalties (including some crucial ones late in the tackle count), it is no wonder the Sharks lost. That it was by only four points is a reflection of the Raiders’ similarly poor stats in these areas.

If the Sharks can improve their discipline alone they will be in a much better position to come away with a win.

In the press conference Flanagan spoke about poor discipline and errors costing them the game, and he will be doing all he can this week to ensure a significant turn-around from his players. I thought that Flanagan, while no doubt frustrated with the loss, sounded calm and composed after the game, acknowledging the problem areas and sounding comfortable that they would be easily resolved.

This is a good sign for fans, that the coach is still confident he has a team that can be competitive, and there is no need to panic just yet.

Kicking
With an accuracy of 83 per cent from Michael Gordon, goal kicking isn’t a problem for the Sharks. General kicks in play, however, are an issue. Jeff Robson’s short kicking game can occasionally produce results, but is average at best.

Barba has never been a noted kicker but assumed responsibility to start the game and the results were terrible – a penalty kick that didn’t find touch, kicking out on the full, and a low flying lob that led to Jack Wighton rushing back for a quick 20-metre restart and going all the way for a try.

All kicks released any pressure on the Raiders, the one out on the full gave them good field position leading up to their first try. The lob was after the Sharks first set following the Tupou try, where they charged 63 metres up the field and had all the momentum, immediately opening the door for the Raiders to hit back.

Robson took over the kicking duties and the end of sets improved, but neither Barba nor Robson possess a good long kicking game, shown by the Sharks only making 231 kick metres compared to the Raiders 378 metres.

Accurate kicking is crucial to winning football games – grubbers and pin point bombs create repeat sets and pressure, long kicks better attain good field position and can get a team out of trouble, and 40/20s can swing the momentum of a match.

If Barba and Robson can’t improve, the Sharks may need someone else with a good boot to step into the role. Who that may be is uncertain – a good old fashioned kick off at training may be required.

The forward pack
Once they finally got going, particularly in the second half, the Sharks forward pack did their job in terms of getting up the field, making 948 run metres compared to the Raiders pack’s 787 metres.

Chris Heighington also set up a nice try for Anthony Tupou by drawing defenders and popping a nifty offload.

Gallen, Fifita and co. eventually showed they will be tough for opposition sides to contain, and if they can cut down their errors should be able to provide the platform for the team to score tries and win games. With David Fifita making 75 metres from just four runs, he needs more game time than the 20 minutes he received on Sunday.

In fact, I think he should come into the starting line up in the front row with his brother.

Notable absentees
Many fans were frustrated with young guns Valentine Holmes and Jack Bird not featuring in the 17 for Round 1, lashing Flanagan on social media sites for depriving the team of the flair it probably needs. Mitch Brown being picked on the wing over Holmes was a particular sore point.

Brown is a solid first grade outside back, doing a job for the Bulldogs in their push to the grand final last year, but he lacks the individual brilliance Holmes possesses.

This was illustrated when Brown was denied a try out wide by Jack Wighton in the dying minutes that would have locked up the game. While it was a superb cover tackle by Wighton, it was the sort of chance the best attacking wingers in the game convert into points, and fans were lamenting what move someone with Holmes’ skill and speed could have put on to find the line in the same circumstances.

It wouldn’t be surprising to see Holmes in the side for Round 2. While typically strong running with ball in hand, Michael Gordon looked hesitant at times, not attacking rolling balls from kicks and letting a bomb bounce. If he continues to be tentative he may leave the door ajar for Holmes to force him into the centres or on the wing.

Blowing off the cobwebs
The NRL has been such a close competition in recent years, particularly for sides battling it out for places in the bottom half of the top eight, that every game is crucial and teams can’t afford to spend too much time getting into the groove. But with a new halves combination and some new faces, the Sharks were rusty.

There were a couple of opportunities to score throughout the game that with more polish through match practice might have seen the Sharks cross the line. In addition, two of the Raiders tries were very soft and should have been defended.

Sisa Waqa’s from dummy half where Robson received no back up and Wighton’s from the tap where the Sharks players were caught taking an untimely breather.

It’s a long season, but with a tough away game against the Storm in Round 3 the Sharks will want to turn it around this Friday night at home against the Broncos to avoid the prospect of being win-less after three games.

I think they’ll be very hungry to make amends and notch up their first win in front of the Sharks faithful, I see them getting home in a close one. What did you make of the Sharks first performance Roarers, and will they beat the Broncos?

Rick was not happy with this call! 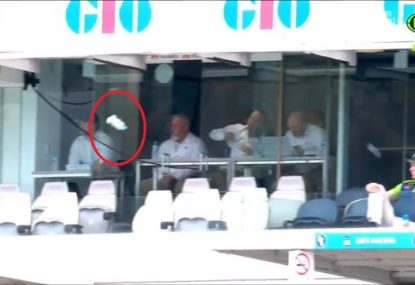 It seemed Lachlan Burr thought Josh Papalii had been pulling his hair in the scrum… but was it actually John Bateman? 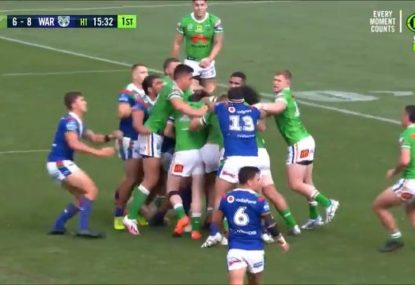 Sydney Roosters legend Mitch Aubusson is now the most-capped player in the club’s history but the celebrations were more than unusual in 2020.

Cronulla will be forced to dig into halves reserves this week after star Shaun Johnson suffered a suspected ruptured Achilles that will end his NRL season.

The Sharks star’s season is likely over on the eve of finals. 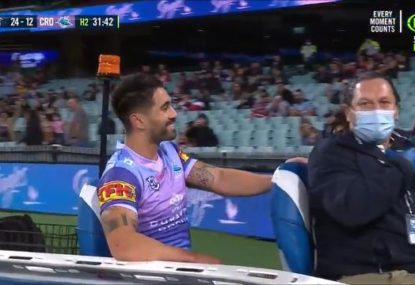 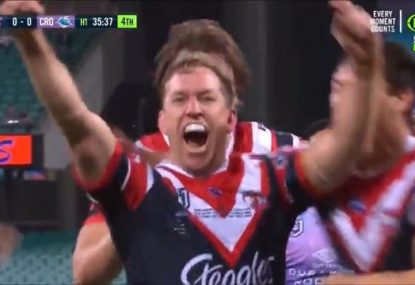