The NBL is in crisis, with just six teams confirmed for next season and among clamour from former greats to shelve the competition, basketball in Australia is arguably on the brink.

But perhaps there in an answer, and basketball’s NBL need look no further than baseball’s ABL for inspiration.

As reported in The Courier-Mail yesterday, the NBL is in serious trouble. The promised Brisbane-based team for season 2015-16 has been shelved and two current teams (Townsville and Wollongong) have entered administration.

Australian great Andrew Gaze has called for the league to be shut down, “shut it down, regroup and get the right model because the model is broken.”

Others have clamoured to save the league in its present form, including current Melbourne United player Mark Worthington, who outlined his passionate support in a series of tweets.

1/2 Another dark day. I refuse to think there won't be a league next season. C'mon Townsville and Wollongong support you team. basketball

2/3 lovers get behind the @NBL. We need this competition in Australia. The @AussieOpals are flying the @AussieBoomers are on the rise.

3/3 basketball needs our support now. I don't want to think of this country without this league. Support your local team. Support the @NBL

It comes on the back of news that Australian teenager Ben Simmons has been named the best high school player in the States – a massive honour for the 18 year old from Fitzroy. This puts him in the same bracket as legendary player LeBron James.

The 6’9” forward cannot match the feat of LeBron – who was drafted into the NBA as number one overall pick just three months later – as eligibility rules have changed, but the Victorian is expected to enter the draft in 2016 after a single season with Louisiana State University in the NCAA.

And Simmons is not the only Australian to make waves in American basketball.

These seven are part of a group of 17 Australians that have played in the NBA in recent years.

So is there a vested interest for the NBA to maintain basketballs popularity in Australia? Absolutely. And there is a precedent for American sports to step in and help out fledgling or failing competitions in Australia. Namely, baseball.

Australians have made as clear an impact on the world’s premier baseball competition as they have on the NBA.

There have been 31 Australian players play in the majors, with seven still listed as active: Grant Balfour, Travis Blackley, Liam Hendriks, Luke Hughes, Peter Moylan, Josh Spence and Rich Thompson. As such, the MLB realised Australian baseball was a strong enough breeding ground for the Americans to fund the Australian ABL to the tune of 75 per cent.

The original ABL was formed in 1989 and ran through to 1999. Financial and infrastructure problems caused the league – which in its final seasons ran at a $2million per year loss – to fold.

In 2009, in a nod to the breeding ground for talented Australian players who plied their trade in the Major Leagues, the MLB announced the formation of the Major League Baseball Australian Academy Program (MLBAAP) on the Gold Coast.

It was at this press conference that the MLB announced the plan to restart the ABL with government support.

The ABL is enjoying greater and greater success in recent years, albeit on a smaller scale than the other sports in this country, and is enjoying a growing profile nationally and internationally. The finals series this season was televised live across Australia and New Zealand, Asia and in the States on the MLB network and attendances at ballparks across the country are growing.

The central ownership model of the teams – common in American sports –helps to limit spending and maintain a sporting equality.

Why could this not work for the ‘other’ ABL with external funding from the NBA?

The NBA is looking to grow its international profile along with other US sports, as has been proven by playing regular season matches overseas in places like London’s O2 Arena.

So could this work?

As someone who does not watch much basketball and has never seen the NBL in Australia, I am not well placed to comment. But financial security and support from a global power in the game cannot hurt a league that clearly has issues with its current direction.

The NBA’s involvement could sure up the finances and secure the leagues future in the same way that the MLB has helped baseballs ABL.

And there is significant support for basketball in Australia. Tickets for the WNBL final in Townsville sold out in less than half an hour and tickets were just as hot for the sold out Cairns Taipans final against the New Zealand Breakers.

For the sake of basketball and basketball fans in Australia, I hope some arrangement can be made and that we can read more of home grown talent like Ben Simmons excelling in the States on the back of early exposure to the NBL. 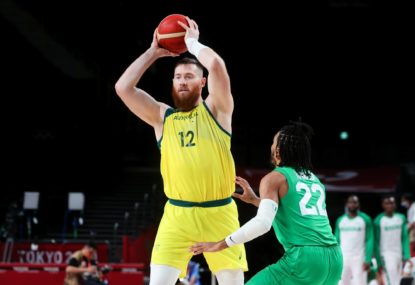