SPIRO: It's the coaches, not the players, that make the game great

Professional rugby has been with us, officially and not as inside the boot payments, since 1996. It has brought improvements to the way rugby is played.

There has been a massive explosion in the numbers of men and women players. Sevens Rugby is now (or will be at Rio) an Olympic sport.

There are widely watched tournaments in both hemispheres that provide terrific entertainment for the cable television networks.

But a historian of the code in decades to come might well decide that the most significant change has been to the status and power of rugby coaches at every level of the game.

The point here is that the mark of a truly professional sport is a coach’s influence on the production of great teams that win titles.

When rugby franchises want to become successful they need to understand this truth about professional rugby. It is the coach who is the most important person in any rugby franchise. It helps if the franchise has some talented players. But it is absolutely critical to have a talented coach.

You could call this argument the ‘Vince Lombardi Theory’ of creating winning sports sides. The Green Bay Packers were a battling NFL franchise before the great Lombardi came in as coach and created a franchise that won the first Super Bowl, and they have been a powerful force in the NFL ever since that fateful victory.

The Chiefs were a Super Rugby franchise that delivered much less than it promised when Dave Rennie took over as coach. In his first year Rennie won the Super Rugby crown with a group of players who had been a motley mob up until then.

Rennie built his Chiefs around the doctrine of the strength of the tribe: Kia Kaha (Be Strong, the first haka call of New Zealand touring sides in the 1890s). The Maori concepts of community were built into notions of team work and players playing for the team rather than for themselves.

Over the weekend the Chiefs bounced back from an unexpected and somewhat inexplicable loss to the Highlanders, at Hamilton, to beat the best South African side the Stormers at their Newlands fortress. Remarkably, the Chiefs achieved their victory despite the fact that their scrum cracked like a plaster cast as if it had been hit by a hammer.

The Chiefs had a game plan of running the huge Stormers pack ragged. Rennie was not afraid to select small backs, like Aaron Cruden and Tim Nanai-Williams, to torment the lumbering Stormers into confusion and ultimately defeat.

Contrast the success that the Chiefs franchise has had by ensuring they had a coach with a record of winning (Rennie was unbeaten with the Junior All Blacks in World Championship tournaments), with the conspicuous lack of success the Reds have had in the last two years under Richard Graham.

Graham, who is a decent man, has never enjoyed success as a coach. Why did the Reds select him and then retain him when it has been clear that he is not up to the job of coaching successfully at the Super Rugby level? The Queensland Rugby Union compounded their mistake with the coach by spending a huge amount of money on trying to buy super stars like Karmichael Hunt and James O’Connor.

A journeyman five-eighth, Mike Harris, was allowed to go to the Rebels where he has been excellent in kicking goals that win matches and filling in positions in the back line from number 10 to the centres and occasionally fullback.

I reckon a coach with nous would have kept Harris on, on the grounds that sides that win tournaments need players like Harris who can fill a number of positions and who kick goals when it matters.

Wayne Bennett has a saying that ‘great sides are predictable’. I think what he means by this is that sides that win trophies play to systems that they have rehearsed and that make sense with the type of players available to the coach to work with.

I can’t see any systems or patterns that the Reds play to. There does not seem to be much rhyme or reason to their methods. As a consequence, the players seem as bewildered as their supporters when plays break down and when their opponents, as the Brumbies did at Suncorp Stadium, expose weaknesses in their defensive patterns.

Instead of spending huge amounts of money on so-called star players, Queensland Rugby Union would have been much better off finding a coach who could restore some winning respectability to the franchise.

That decision was not taken for this year so 2015 is a lost year for the Reds. There will certainly be a new coach next year. Who could do the job?

There is Robbie Deans, plying his coaching craft in Japan and winning this year yet another championship title. I don’t know if Deans is interested or if Queensland Rugby Union is interested. But you would think that Deans would be more interested in coaching in Brisbane than in Japan.

Greg Growden, always a great source of inside information, has suggested that Pat Howard, a successful coach at Leicester, is in the mix. Also Todd Louden, now with the improving Rebels, and formerly a coach in Japan. Louden is a smart thinker about rugby as his columns in The Roar some years ago indicate.

The most interesting Growden suggestion is Ewen McKenzie. A quantity surveyor by training, McKenzie has been working on the Christchurch rebuild. He built the Reds into winning the 2011 Super Rugby tournament. Could he do it again? Should he be given the chance of repeating his earlier success with the Reds?

My feeling is that if he is motivated to achieve success with the Reds franchise and if Queensland Rugby Union embraces his return, a McKenzie second coming could be the sort of gamble that needs to be made.

Having said that, it is true that after 2011 things went downhill somewhat for the Reds before McKenzie left to take over the Wallabies at the end of 2013. But after 2011 it was clear that McKenzie’s energies were being directed towards positioning himself to take over from Deans, a plan that ultimately succeeded. 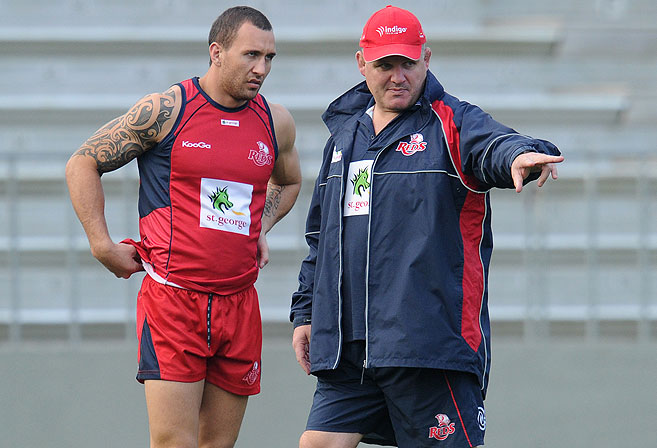 This brings us to the Waratahs and their surprise loss to the Highlanders at Dunedin. The point here is that last season – where they won their first Super Rugby title – the Waratahs were predictable. But what made their predictability work was a ferocious work ethic by all the players and high skills levels in decision-making and simple catch-and-pass plays to set up tries.

Against the Highlanders the predictability was there. The game plan of moving the ball wide and then smashing through with big runners off-loading and with Israel Folau coming into the line to make breaks and off-loads for other runners, this game plan so successful in 2014 was still in place.

The problem was that the efficiency of implementing the game plan was just not there. The Waratahs lost the battle of the collisions. The Highlanders gang-tackled the Waratahs’ big men and man-handled even Folau.

Malakai Fekitoa’s strip of the ball from a charging Folau and then his off-load to Waisake Naholo to run 60 metres to give the Highlanders an unlikely 14-12 lead at half-time was the turning point of the match.

The Highlanders identified, too, the Waratahs reluctance to commit players, especially Michael Hooper, who was used primarily as a runner, to the rucks and mauls. The result was that the Waratahs were forced to turn over ball. The Highlanders’ counter-attacks were often devastating and exposed tackling weaknesses out wide.

The Waratahs, too, made a serious mistake in deciding to harass Aaron Smith off his game, even if this meant illegally taking him out of play. Craig Joubert is a referee who is adamant about fair play, and rightly so. When Smith was taken out twice inside the Waratahs’ 22 in the same series of attacks, Joubert had had enough and Sekope Kepu was given a yellow card.

Up to this point the Waratahs scrum had been well on top of the Highlanders. But the eight Highlanders drove through the seven Waratahs and the momentum shifted to the home pack. Joubert, who had been penalising the weaker Highlanders pack, now started to penalise the Waratahs.

It seemed to be that taking Aaron Smith out of play was a deliberate ploy. Certainly, Joubert made this point when he sent Kepu to the naughty chair.

I always believe that this sort of tactic is self-defeating. It is demeaning of a side that prides itself, or should pride itself, on defeating opponents on their own positive terms and not be playing illegally.

All the Australian franchises should look at the Brumbies. They are the least penalised side in the tournament. They gave away only six penalties against the Reds, who gave away 12.

I like sides that try to play positively and try to win by forcing mistakes from their opponents. The Brumbies, coached by Stephen Larkham, who as a player was a terrific and legal competitor, do not take short cuts when setting up their victories.

The Brumbies, too, are predictable in their play in that you can pick when they are going to do a driving maul, say, because it will come at exactly the right time and be expertly performed. It is this excellence in execution that is the key to predictability.

You can know what the opposition will do, as the Lions did when the Crusaders did a number eight-halfback Kieran Read to Andy Ellis move from a five-metre scrum. But you still have to try and stop it if it is done expertly.

This expert performance of their systems suggest that the Brumbies are the best Australian side, right now.

How the Waratahs respond to the challenge of defeating this well coached, confident Brumbies side is going to tell us a lot about the coaching talents of Michael Cheika.

I am expecting a more focussed, smarter and tougher Waratahs side against the Brumbies at Allianz Stadium on Sunday than the flustered mob that was out-played in the last 50 minutes of their match against the Highlanders.

Cheika is under pressure to deliver as a coach, as well as his team to deliver as a champion side must when it is out-played by opponents who, on paper at least, seem to be their inferiors.