A beer with a British Lion: Robert Ackerman

Instead of quietly scattering his ashes, Ackerman hurled the ashes to the right and the left of where he was standing.

It was a symbolic gesture, recalling the day he carved up Gloucester for Newport.

In 1980, Ackerman scored a record six tries on the wing in that Welsh Cup fixture to capture nationwide headlines and catapult himself into the Welsh national side, aged 19 years and 244 days old.

“My father was secretary of Newport and an ex captain. He called me up and said I was playing for Wales on Saturday,” Ackerman says of his call-up.

“Gareth Evans (A British Lion in 1977 and ’80) had withdrawn injured. I met Stu Wilson at a dinner after Newport played the All Blacks on Tuesday. I was marking Stu in the Test and he reminded me about how I was a green 19-year-old.”

Wales got thrashed 23-3 in the WRFU Centenary Test.

“I was thinking, ‘I can’t play the All Blacks, I am a kid and they’re huge men!’ I was right, but it was still properly my best game for Wales.”

Ackerman survived his debut ordeal and was involved in two stirring victories in 1981.

A then-record 19 points by Dusty Hare wasn’t enough to see England to victory in Cardiff. Steve Fenwick booted 14 points and Wales hung on 21-19.

Later, Bledsoe Cup holders Australia were edged 18-13. Australia led by six points and outscored Wales two tries to one heading into the second half, but the dead-eye goal-kicking of fullback Glynn Evans proved decisive.

“Australia was a major scalp,” Ackerman says. “They had some class players like Paul McLean, Simon Poidevin, Paul Maclean, and Greg Cornelsen, who scored four tries against the All Blacks. It was really satisfying to beat them.”

Ackerman was capped 22 times between 1980 and 1985. Wales failed to win the Five Nations championship in that period and lost some long-standing records.

“It was a period of transformation for Welsh rugby”, Ackerman says. “Though it was hard to accept defeat and face your family feeling like you had let them down, it was a relief to lose some of those records. They were a huge burden to carry and once they were gone you felt you could play with more freedom.”

The freedom of France was particularly enjoyable. Glynn Evans booted six penalties to beat the tricolours in 1982, but Ackerman never won in Paris. However a good time was always guaranteed.

“The French would always put on a lavish after-match function,” he says. “In ’85 we exchanged gifts and they gave us a posh aftershave. We thought the champagne was better so rushed to the bathroom and emptied all the aftershave and replaced it with champagne.

“Debutant Gareth Roberts was out before he even hit the floor. The next morning when we assembled in the hotel foyer, Roberts came out with only a towel and bucket over his head.”

Ackerman laughs, “I don’t know why we ever turned up to those dos in white tuxedos. They changed colour pretty quickly.”

Ackerman says Frenchman Philippe Sella, the first man to play 100 Tests, was the toughest player he marked in international rugby.

“Philippe was the complete centre, a genius of a footballer. He was hard, but he had wonderful touches of finesse, speed and flair. It was a privilege to mark him.”

Ackerman scored his only Test try in an 18-9 victory against Ireland at Lansdowne Road, Dublin, in 1984.

There was a penalty to pay for such trickery.

“Our dressing room got robbed during the game,” Ackerman says, “The Irish rugby union was very embarrassed about it and offered to compensate us in cash before we left. Our captain, Mike Watkins, gathered the boys around and told us to make sure we put in a decent claim. I was a poor student and gained 500 quid, which was the smallest claim.”

During Ackerman’s career Wales wasn’t robbed of their unbeaten run against England in Cardiff. England went from 1963 to 1991 without a win in ‘The Land of Our Fathers’.

In 1985, England was beaten 24-15 and they were conquered by the same score a year earlier at Twickenham. Dusty Hare kicked five penalties for England, and Glynn Evans four for Wales.

“Our first-five Malcolm Dacey kicked two drop goals,” Ackerman explains, “the only reason he did that was because he refused to pass the ball to me.”

Ackerman described a win at Twickenham as the “best feeling in the world” and explains the rivalry between the two teams was even intense at the get-together after the game.

“In Ireland nobody wanted to sit next to Moss Keane because he drank too much. We used to call him the kiss of death.”

The euphoria of defeating England was a stark contrast to Ackerman’s experience in Romania. In 1983, Wales were humiliated 24-6 in Bucharest and outscored four ties to nil.

“We got off the plane and there were tanks rolling down the street. People were lining up for bread. We took our own bacon and eggs because the local cuisine wasn’t very nutritious,” he remembers.

“We thought the All Blacks were tough; these guys were on a different level. They were army men who looked like Die Hard villains.”

Ackerman marked Adrian Lungu – Romania’s most capped player with 76 Tests. “That guy was a monster. He made me look like a pigmy.”

Flanker Florică Murariu was an officer in the Romanian Army. He scored a try in this game, and was capped 69 times. In 1989 he was shot dead at a roadblock during the Revolution.

The relief to escape Romania was palpable: “Instead of exchanging ties at the after-match we gave them pencils and Mars bars; pencils to sign immigration forms to get out of there and Mars bars for dessert. The sweetest delicacy over there was horse meat.”

Ackerman was much keener to come to New Zealand. In 1983 the British Lions toured, so in 1982 Ackerman took a punt.

“My 21st birthday present was an airline ticket to New Zealand. I wanted to experience New Zealand rugby before the Lions were picked. I played for Suburbs in Auckland.

Ackerman made the tour and played in the first Test at Lancaster Park, Christchurch. The Lions lost narrowly by 16-12. Ackerman was made a scapegoat for the defeat.

“We were attacking inside the All Blacks 22 and I hit a gap. I had Roger Baird outside me and didn’t pass. I maintain to this day I made the right call. When I was the only Test player named in the team to face West Coast the following Tuesday, I figured it might be a long tour.”

Legendary Irishman Willie John McBride (the only man to make five British Lions tours as a player) was manager. Ackerman recalls McBride fondly: “Willie John was a hard man, a legend, a free bar. He said he was always available and his hotel room became a revolving door.”

The Lions discipline lapsed after losing the second Test in Wellington, and dietary choices were regulated. Ackerman explains:

“Coach Jim Telfer banned us from ordering dessert while eating together so we used to chat up the hotel staff and get it on room service, hiding it like you would an adult film: ‘Honey please send a couple of chocolate cakes to Room 81.’

After the third Test loss in Dunedin frustration completely boiled over and a massive food fight erupted at the black-tie dinner after the match.

“It was cold and the service of the food was delayed. As you can imagine the guys were getting restless and then all of a sudden a piece of bread flew across the room and it was all on, total chaos!

“Tables were toppled and gravy was splattered on the wall. I remember Bernie Fraser with two bottle tops in his eyes. I got hit on the head with a potato by All Black halfback Dave Loveridge and haven’t been the same since.”

Even worse was what happened after the Lions game against Counties, in which Ollie Campbell kicked 21 points to secure a hard-earned victory.

“Gerry McLoughlin replaced Ian Stephens and joined the tour party in Pukekohe. We won that game. It was a tough one. All Black Captain Andy Dalton scored two tries for Counties. We enjoyed our victory long into the night.

“The next morning we were assembled in the hotel lobby to depart and Gerry had lost his blazer, a prized possession. We walked down the street and there was Gerry’s blazer hanging in a tree about 200 yards away from the hotel. ‘Ginger’ still doesn’t remember how it ended up there.”

Ackerman emerged from the rubble to earn a recall for the fourth Test at Eden Park, Auckland. The Lions were walloped by a record score and sent home with their tails between their legs.

Ackerman says, “We might have lost the rugby, but we won the drinking and the food fight.”

Ackerman switched to rugby league in 1986 and played professionally for Whitehaven, Salford and Wales. In 1993 he retired.

A long-time physical education teacher Ackerman taught at the American school of Doha Qatar, Christ’s College in Christchurch, and currently works at St Patrick’s College, Silverstream in Wellington, where He has coached the first XV and first XIII to local titles.

“When I tell my friends in the northern hemisphere first XV rugby is televised in New Zealand they can’t believe it. When I told them St Kentigern’s had half a dozen masseuses they were even more floored.”

Ackerman concludes: “Rugby is a game with great challenges, opportunities and friendships. I am very proud I was an international. I love working with young men and helping them become better rugby players and better people.”

Did you know?
Tom Pryde is the youngest player to play for Wales. He was 18 years and 25 days when he played against Italy in 2010.

Ackerman went to school in Wales with Mark Evans, now the chief executive officer of the Melbourne Storm.

The Wallabies skipper will break George Gregan’s record for most Tests as captain against the Springboks. 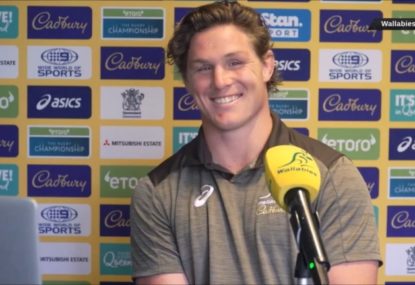 In his press conference ahead of his record-breaking 60th Test match as captain of Australia on Friday, 29-year-old Michael Hooper referred to 25-year-old Andrew Kellaway as “a kid”. 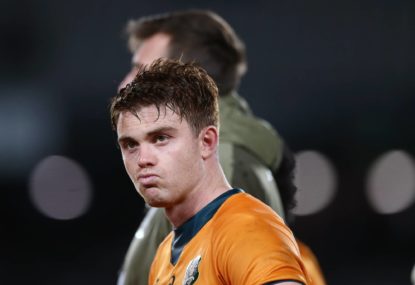 Wallabies captain Michael Hooper has brushed off his coach’s suggestion that more fans would consider him a “great” if he’d been fortunate enough to play in a more successful team, saying he’s “loved” being the main man in the current crop. 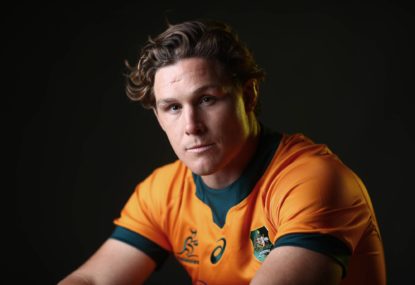 Thanks to all who contributed a question at call-out time. They kept the All Blacks quiet for the first quarter of the match but the floodgates opened for Argentina last week and they’re looking to sure up their defence when they take on New Zealand again in Brisbane tomorrow night. 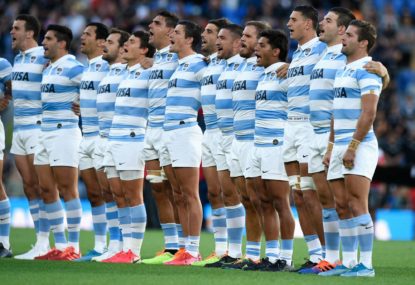 Rugby Australia has confirmed the Wallabies will take on Japan in Japan next month en route to the United Kingdom for the traditional Spring Tour.