Where the World Cup final will be won and lost

Who is going to bowl an underarm delivery for the penultimate ball? Who will put a squash ball in their glove and score a century? Who will win the World Cup final? The answer to these questions and more in this breakdown of Australia and New Zealand.

New Zealand have been the best team in the tournament, winning all their matches and getting contributions from one to 11. But the final will also be their first game outside New Zealand for the entire tournament – not an ideal preparation.

Admittedly, Melbourne’s drop-in pitch won’t hold too many demons for the Kiwis, however the surface won’t produce as much side-ways movement as home conditions. If anything there should be more bounce on offer.

Everyone seems to be comparing the size of the MCG to Eden Park, pointing it out as a weakness for the Kiwis. I’d be more worried about the pitch as opposed to the dimensions of the ground. Boundaries might be harder to hit but there will be a plethora of gaps to pick off.

I did previously have question marks over Grant Elliot’s position in the middle-order but last week’s semi-final against South Africa comprehensively erased those doubts. The South African native was superb in guiding the co-host’s chase.

One favour the Proteas did do Australia was exploit a weakness in the bowling unit. While Trent Boult, Tim Southee and Daniel Vettori have been terrific, the fifth bowler has been exposed. On Tuesday, Corey Anderson went at more than 11 runs per over, as AB de Villiers, Faf du Plessis and David Miller went after him. If Australia can get through the new ball unscathed there are runs to be had.

Australia will and should be confident of victory, knowing that as a team, they are at the peak of their powers. Many criticized Aaron Finch’s innings on Thursday night but in hindsight, Steve Smith was the only one to make batting look easy on that Sydney surface. I don’t think enough credit was paid to Finch’s knock due to the fact his partner made things look so simple.

Another player who didn’t get the credit he deserved from Thursday’s semi-final was Mitch Johnson. The Ashes hero contributed necessary runs at the death but, in my opinion, it was his second spell that changed the game.

Johnson accounted for Rohit Sharma and Virat Kohli during an inspired assault. India were cruising and those two would be the catalysts if the reigning champions were to successfully chase down Australia’s total.

Enough has been written and said about Mitchell Starc, the bowler of the tournament, but I feel it will be another left-armer who will be decisive in the final. He changed the group game against the Aussies and now Kiwi legend Daniel Vettori has a chance to write his name into New Zealand sporting folklore.

Australia have gambled the house on their pace bowling entourage, but on a slow MCG wicket it could be the slow bowlers who have most effect. Vettori has been the spinner of the World Cup and the decider could finally be the moment Australia comes to regret not selecting Nathan Lyon in the squad. It would be a brave move to bring Xavier Doherty in at this stage, so a lot will depend on Glenn Maxwell.

All in all we’re set for an absolute humdinger. New Zealand have all the momentum but I think not playing in Australian conditions at all during the tournament will be their downfall. The Black Caps did win their last ODI at the MCG way back in 2009, but I think Michael Clarke will bow out of the game as a World Cup winning captain.

The Caribbean Premier League starts on 18 August and will be the first T20 tournament in the COVID-19 era. 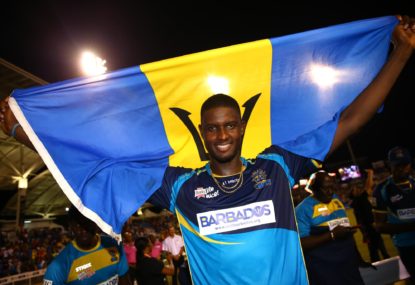