How will the Cavs fare without Kevin Love?

David Friedman
Expert
3rd May, 2015
10
Join the conversation
Advertisement
Write for The Roar

Kevin Love has not fit in smoothly with the Cleveland Cavaliers this season. His individual numbers plummeted and it quickly became apparent that he and LeBron James do not have a very good rapport off the court.

Make no mistake, though, that Love’s absence will be keenly felt by the Cavaliers in their second round match-up with the Chicago Bulls and in any subsequent playoff series. Love suffered a season-ending dislocated shoulder in Game 4 of Cleveland’s first round sweep of the Boston Celtics.

Love is valuable because he is versatile and because his skills blend in well with Cleveland’s needs. During the regular season, Love led the Cavs in rebounding (9.7 per game) and defensive rebounding (7.9 per game) while also ranking second on the team in three-point field goals made (144). He is a solid postup player, though the Cavs have not fully exploited his skills in that area.

Love fell from the ranks of the NBA’s scoring leaders (much like Chris Bosh did when he played alongside James in Miami) but he still finished third on the team in scoring (16.4 points per game). His outside shooting touch spreads the floor on offence and even though he is a below average one-on-one defender he is a very capable defensive rebounder and his outlet passes ignite fast break opportunities.

The Cavs went just 3-4 without Love during the regular season. The Cavs won three of their four regular season games versus Chicago but the one game that they lost is a game that Love missed.

Some people may believe that either Love has declined or else he only is able to accumulate All-Star numbers as the lead guy for a losing squad. It is tempting to get caught up in what the numbers say but what really matters is a player’s skill set and how that skill set impacts both his team and the opposing team.

A player’s skill set is best evaluated by the good, old fashioned eye test. For instance, a player who is a credible outside shooting threat opens up the court even if he does not shoot a lot of three pointers, because the opposing team must assign a defender to chase him around the three-point arc. The only time that would not be the case is if that three-point shooter plays with teammates who just refuse to pass him the ball; then his shooting skill set would not matter, because the opposing team could rely on the fact that the shooter’s teammates would nullify his potential impact.

Unless a player’s skills erode due to age and/or injury, yearly fluctuations in his statistics probably do not accurately depict his value and impact. The numbers say that Chris Bosh became a lesser player in Miami than he was in Toronto but the truth is that he just adjusted his game to what best suited the Heat’s needs.

Miami coach Erik Spoelstra often called Bosh the team’s most important player. Love is not Cleveland’s most important player but he is important in ways that statistics do not completely reveal. When Love is on the court, opposing defences must respect his outside shooting touch while also being wary of the possibility that he will post up a smaller defender.

When LeBron James has an open driving lane because Love’s defender will not leave him, Love deserves some credit for the ensuing statistics (field goal made, points, shooting percentages) that are added to James’ totals. Love could go through stretches during which he does not even attempt a shot but he still made an impact because his presence deterred a potential help defender from ‘cheating’ to form a wall against James.

What can/should the Cavs do without Love? They will almost certainly experiment with small line-ups featuring James at power forward. The downside to this is if the Cavs go too small and limit Timofey Mozgov’s minutes then they are nullifying a player who made important contributions as the Cavs soared from a sub-.500 record to legitimate championship contention.

The Cavs could also just insert Tristan Thompson in Love’s place and count on Thompson’s energy and athleticism to make up for Love’s shooting prowess and rebounding tenacity.

Cleveland has enough to get by Chicago even without Kevin Love. However, the further the Cavs advance the more he will be missed, as sophisticated defences do everything possible to frustrate James mentally, physically and emotionally. 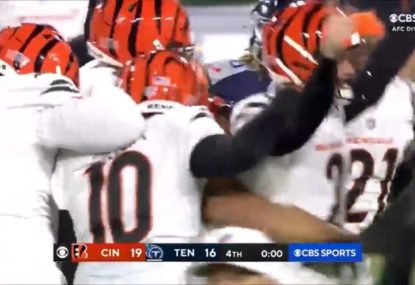 The Cincinnati Bengals just keep ending NFL post-season droughts, and their latest victory has them in their first AFC championship game in 33 years. Rookie Evan McPherson kicked a 52-yard field goal as time expired, lifting the fourth-seeded Bengals past the top-seeded Tennessee Titans 19-16 on Saturday to end the NFL’s longest active road play-off […]