He’s traversed the globe throughout a 15-year career spanning clubs in Australia, Europe, the United Kingdom and Asia, but now affable, evergreen marksman Daniel McBreen has revealed that he will call time on his professional playing days at the end of 2015 unless an A-League club is willing to “take a chance” on him.

McBreen, who is contracted to South China AA of the Hong Kong Premier League until the end of May, says living back in Australia alongside his wife Gabrielle and rapidly growing sons Noah (four) and Leo (two) will take top priority in his life come the end of the year.

While another six-month deal purely for financial factors somewhere across the vast footballing world is a possibility to round out 2015, the 2013 A-League Golden Boot winner remains hopeful that the McBreen-clan will see their ideal and preferred scenario realised – husband and father Daniel returning home once and for all with one last A-League playing contract in hand.

“I am sick of being away from my family now,” McBreen – who spent large chunks of 2013 and 2014 playing in China – told The Roar from the densely populated East Asian metropolis. 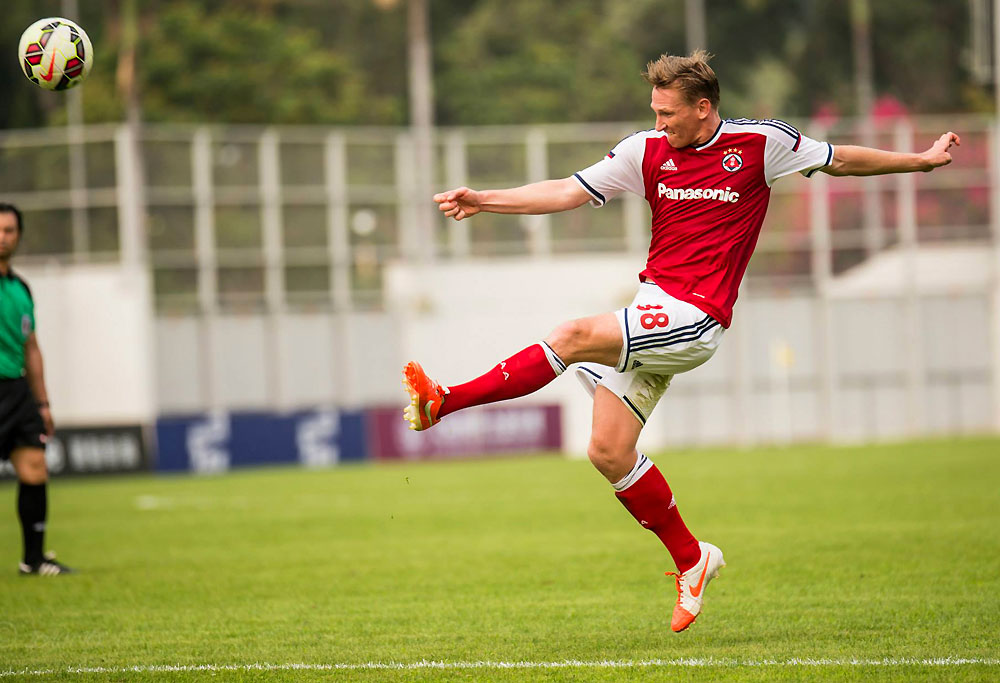 Last month McBreen – whose age was an ongoing angle for media even two years ago when he was hammering home goals for fun – turned 38. The former Central Coast Mariners striker – who says he has been spending extra hours in the gym in Hong Kong to remain ready for his final deal – is certain he can still keep up with A-League hot shots, some of whom now border on half his age.

Indeed, McBreen confesses an additional part of his desire to return to Australia’s top flight is in fact to help groom the next generation of local professionals, youngsters he’s been following closely from Asia.

“Physically I am fine,” he said with a cacophony of Hong Kong’s traffic humming around him. “I am sure people think with my age I could be a problem, but it’s not been a problem the last few years so I would hope any decision to sign me or not wouldn’t rest upon my age. I think everyone knows what I can offer and I know I would enjoy it back home. I’ll have to see what happens over the course of the next month or six weeks.”

“I just want to get back into an environment again where it’s professional, where everybody gives 100 per cent, we all have a common focus and goal, and everyone wants to win. I feel now with my age as well I could get back into a club and be part of a senior group where I could help the young boys progress their game and work towards a common goal together. I want to give back to the game and just try and help younger guys try and realise their dream as well.”

“I spend a lot more time on social media and the internet here than I should. I follow the A-League closely and am always looking to see what clubs are doing what. Obviously when I ultimately come back to Australia I will do that anyway, whether it’s as someone directly involved in the competition or as a fan. It’s always good to see how the boys are going.”

Certainly McBreen has demonstrated in the first half of 2015 that he still knows how to find the back of the net. South China AA has already booked their place in the last 16 of the AFC Cup – Asian club football’s second tier continental competition – with one Group G game to go. The men from the Mong Kok Stadium have won five from five against rivals Pahang FA (Malaysia), Global FC (Philippines), and Yadanarbon FC (Myanmar), with a trip to the latter to round out the section this week.

Throughout the round robin phase of the tournament, McBreen has scored four times to sit equal second on the competition’s top goal-getters’ list, and he’ll have two further opportunities to enhance that record before time is called on his tenure in Hong Kong.

First up, as mentioned, it’s Yadanarbon FC at the Mandalar Thiri Stadium on Wednesday (May 13), before South China AA shoot for a place in September’s quarter-finals with a one-off round of 16 encounter at home to either Indonesia’s Persipura Jayapura or India’s Bengaluru FC in a fortnight. Despite his yearn to return to Australia, McBreen says he still appreciates the unique opportunities football has provided him to explore pockets of the world he might otherwise never have thought to visit.

“I had lunch with someone today and we were talking about all the places that you get to go with football,” he said. “We’ve already won the group but I am still keen to go to Myanmar, check it out and see what it’s like over there. It’s another experience, and it’s been great participating in the AFC Cup because of all the different places you get to go and see.”

Nevertheless, McBreen would swap the arrivals hall in Mandalay, Myanmar for that of Sydney International Airport in a heartbeat, such is his desire to return to Australia to be with his family as soon as possible. In football, that ‘family’ extends to those he cares about most in the game, not least ex-teammate John Hutchinson who will hold his testimonial fixture in Lisarow on May 23.

A raft of McBreen’s former allies, including former and current internationals Mile Sterjovski and Bernie Ibini, are set to participate in the game, and McBreen wishes that he too could be part of Hutchinson’s side to challenge the modern day Mariners at boutique Pluim Park.

“When he [Hutchinson] told me the date and then I found out our last game was a week later I was gutted,” McBreen confessed. “It would have been real good to get out there and have a kick with the boys, and surely a beer afterwards, but I am sure I will catch up with ‘Hutch’ when I get back for my break in June. We’ll reminisce about the good and bad times and I’ll hit him up for a gig now that he’s second in charge at the Mariners.”